It was our final day in Poznan and at last the sun had decided to put in an appearance, enhancing the beauty of the tall and colourful former merchant’s houses surrounding the Old Town Square.  Many of these buildings were reconstructed following heavy damage during the Second World War and are exact replicas of the ones destroyed.

Dominating the small group of buildings in the middle of the square stands the historic Town Hall which dates back to 1253.  The magnificent Renaissance building we see today was designed by an Italian architect and constructed between 1550-1560.  A 61m tower is a later addition and was built in the 1780’s after the original one collapsed.

Every day at 12.00 noon, two mechanical goats appear through a pair of small doors above the town hall clock and butt their horns together twelve times.  Legend has it that two goats originally destined for a celebratory banquet escaped and ended up clashing horns above the clock which was soon to be unveiled.  This caused much amusement to the assembled dignitaries so the clockmaker was instructed to include the butting goats in the clock workings.

We were eager to witness this unusual sight for ourselves so were in position by 11.50.  By the time the clock struck 12.00 a large crowd had formed to view the proceedings which were fun to watch and lasted for several minutes.

Following the excitement of observing butting goats we moved onto the Wielkopolska Military Museum close by (PLN12) and included in the Poznan Card.  This museum is a complete opposite to the magnificence of the town hall with its brutalist, late 1950’s communist era design.  The museum documents the history of the Polish military starting with the use of 11th century scythes, leading on to 20th century grenades.  On the upper floor we viewed a collection of medals, uniforms and postcards dedicated to the Wielkopolska Uprising.

Also located in the Old Town Square is the Museum of Musical Instruments, PLN12 and included in the Poznan Card.  This museum, which only opened in late 2019, holds a collection of professional and folk instruments collected from all over the world.

Combining music and history the museum was much more interesting than we had at first anticipated.  Over three floors we viewed everything from barrel organs to harpsichords and musical boxes.  By scanning a QR code on selected instruments with our phones we were also able to hear short excerpts of music played on them which helped to bring the museum to life.

Leaving there, we couldn’t resist popping back to the Bethlehem Christmas Market for a final tasty sausage and a mug of mulled wine.  The market didn’t look quite as atmospheric in daylight but was still attractive with plenty of people around as we enjoyed our tasty treats.

We had timed our lunch break well as on checking our watches we were just in time for our final activity which was to be a visit to the Poznan Croissant Museum and Experience located just behind the Old Town Square.  It’s not a museum in its true sense of the word but actually an interactive one hour live show about the St. Martin’s Croissant, a Poznan speciality with its rich almond and poppy seed filling.

Shows take place daily with a Saturday afternoon performance in English.  Upon arrival we were led up to the second floor where we sat ourselves down on benches in a room seating 50 people.  Shortly after the show commenced we discovered what makes the Poznán St. Martin Croissant so special.  We learnt that they originated in 1891 when a priest in the St. Martin’s parish started a charity campaign to help neighbours survive the winter.  The tradition continues to this day as on 11th November (Polish Independence Day) Poznán residents take part in a joint celebration by combining this with a St. Martin’s Day parade through the city centre when thousands of these richly filled poppy seed and almond delicacies are devoured.

After learning about the origins of the croissant, volunteers were invited to participate and both adults and children came forward from as far afield as Iceland and Ukraine to put on aprons and chefs hat to at least look the part.  The show was an entertaining comedy experience and lots of fun for all ages.  The volunteers got involved in weighing out the flour, rolling and cutting the dough and then piping in the filling.

Once these were in the oven,  everyone got a taste from a batch that had been made earlier by professionals and these were mouth-wateringly delicious and eaten so quickly that I even forgot to take a photo.  On departure, we were all presented with a certificate declaring that having attended the experience, we were now permitted to re-create a St.Martin’s croissant ourselves.

This concluded our activities in Poznan and we just had enough time to return to the hotel to collect our luggage before ordering an Uber (PLN 25/ £4.50) to take us back to the airport for our flight home.  We arrived there just as the check-in desk opened and after showing our ‘Fit to Fly’ certificates we then had time for one final glass of Polish beer before boarding our flight back to Manchester.

Visiting Poznan in winter had been a delightful experience with its stunning architecture, interesting museums and picturesque Christmas market.  We were so lucky that it snowed whilst we were there as it transformed the city and its parks into a winter wonderland making our city break even more special.  This wooden tree decoration pictured above of the butting goats now adorns my Christmas tree reminding me of  our lovely weekend break.

Our short break in Poznán was supported by Poznán Travel and as always all views and opinions are entirely my own. 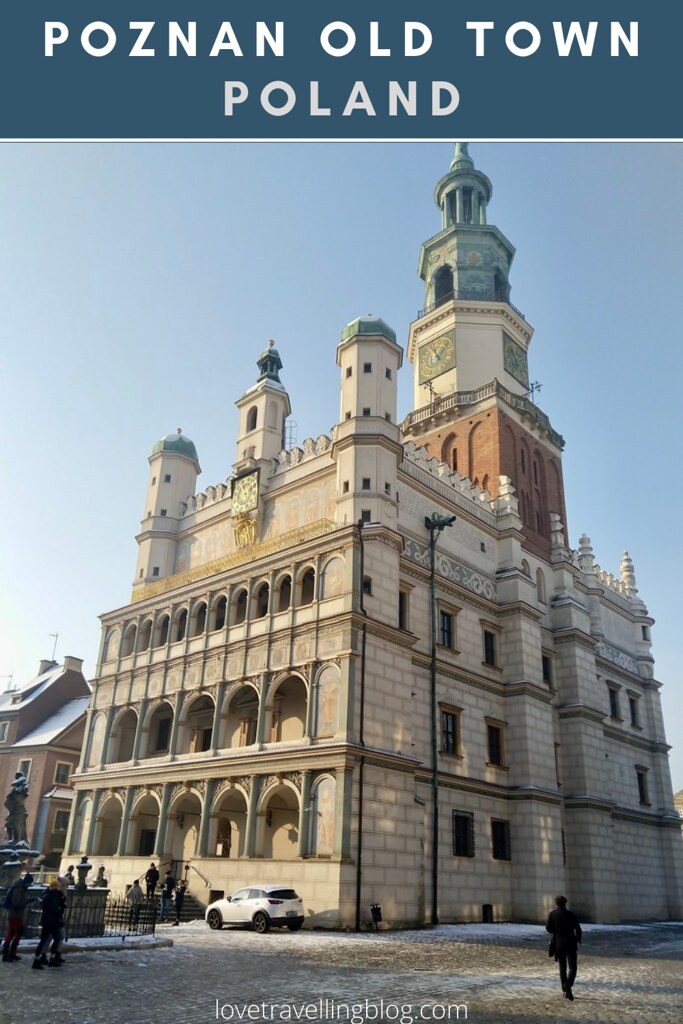