We decided to spend the day in Reading, a town in the Thames Valley to the west of London.  It’s Berkshire’s biggest town and also the largest in the UK to not have city status.  Reading is a popular commuter town with a train almost every five minutes into London and the fastest services taking only 27 minutes.

The town is kind to motorists as its Thameside Promenade car park offers unlimited free parking at weekends.  As it only has 62 spaces I would recommend arriving fairly early as we arrived at 11.30 a.m. and were lucky as there were only three places remaining.  We’d decided to take a three mile (4.3km) loop around the town and its two rivers, the Thames and the Kennet.  The walk would take us along the Thames Path, through the city centre and to the ruins of Reading Abbey.

Leaving the car, it was only a few steps to walk for us to reach the riverside footpath where we were greeted with a large group of swans.  Boat trips along the River Thames start from Caversham Pier which I’m certain must be very enjoyable when they start running again.  A good idea would be to walk in one direction to Sonning and then take the boat back.  Crossing Caversham Bridge, we enjoyed some good views over the Thames and paused awhile to watch some rowing practice taking place from the nearby Reading Rowing Club.

Having arrived on the north bank of the river, we strolled through Christchurch Meadows which stretches all the way along to Reading Bridge.  Along this stretch we saw large numbers of gorgeous fluffy goslings and ducklings along the waters edge being guarded by their protective parents.  The meadows are ideal for both ball games and riverside picnics with numerous wooden tables provided.  It wasn’t too busy but it was nice to see people out and about again enjoying the spring sunshine.

Walking along the riverside we admired the brightly painted canal boats and cruisers moored by the bank and the numerous luxurious apartments with their unrivalled riverside views.  Crossing the river once again we soon reached Caversham Lock where we stopped briefly to watch a narrowboat make its way through the lock gates.  Assistance is provided at this lock during the day but a sign indicated that it is still navigable at other times on a self-service basis when the lock keepers are off duty.  The original lock was built in 1778 with the present lock and lock keepers cottage erected in 1905.

Running parallel to the lock is a weir and footbridge which we had tried to use to cross the river.  Unfortunately on our visit this was closed for renovations but normally it forms an attractive crossing point via View Island which we later discovered was upgraded from a derelict boatyard to a nature reserve some 20 years ago and is now a wildlife haven.

Continuing past the lock we followed the footpath along the river bank until we reached the point where the Thames meets the River Kennet.  Reading lies at the eastern end of the Kennet & Avon canal which is 87 miles (140km) in length linking London with the Bristol Channel.  The canal was constructed between 1718 and 1810 and was mostly used to transport coal and building stone from Somerset to London.

Following the River Kennet we walked back towards Reading, passing briefly through a more industrialised section of the riverside before reaching the attractive Blake’s Lock.  I would like to return here when museums are back open as the lock is home to the Riverside Museum located in two former waterworks buildings.  This branch of Reading Museum tells the story of Reading’s two rivers – the Kennet and the Thames.

Shortly afterwards we arrived at our chosen lunch stop, ‘The Back of Beyond’ pub which lies on a small island where the river divides.  Despite indoor catering not yet having resumed, we managed to find a table in the pleasant courtyard overlooking the river where we rested our legs whilst enjoying a bite to eat.

Feeling refreshed, we set off again along Chestnut Walk to the abbey ruins.  Reading Abbey was founded by Henry I in 1121 and visited by many kings including Henry III who stayed there on numerous occasions.  The abbey was largely destroyed in 1538 when all monasteries across the country were suppressed during the Dissolution of the Monasteries by Henry VIII.  Although it’s now mostly in ruins, parts of it have been renovated and visitors can enter the remains of the former Chapter House.

Adjacent to the abbey is Reading Gaol noted for detaining Oscar Wilde (1895-1897) who wrote the famous poem ‘The Ballad of Reading Gaol’ following his release.  The prison closed and has been unused since December 2013 but there are plans for it to become an arts and heritage centre serving the wider community.

Before visiting, we’d read that Banksy, the elusive street artist had as recently as March 2021, painted a mural on the prison wall depicting a prisoner escaping from the gaol using a rope made from bed sheets tied to a typewriter.  We had hoped to view this art work but at the time of our visit it was being restored after vandals had smeared red paint over it.

Moving on from the abbey, we wandered into the nearby Forbury Gardens which once formed the outer court of the abbey.  It became a public park in the middle of the 19th century with the huge Maiwand Lion sculpture added in 1886 to commemorate the fallen from the 66th Berkshire Regiment at the Battle of Maiwand in Afghanistan.  The gardens are laid out with lawns, flowerbeds and specimen trees and features a bandstand where summer concerts take place.

It was then time for a spot of shopping so we headed to the large Oracle Shopping Centre not far away which has an attractive setting straddling the River Kennet.  The indoor mall is bright and airy and contains the usual mix of high street stores with a branch of John Lewis nearby, whilst numerous bars and restaurants offer a pleasant setting with their outdoor terraces overlooking the riverbank.

Before returning to the car, we explored more of the pedestrianised town centre, finding some interesting small independent shops tucked down narrow alleyways and along Bridge Street.  The final landmark we came across was the neo-Gothic town hall dominating the Market Place.  It’s now home to the Reading Museum which would have been interesting to visit if it had been open.

Our looped walk then took us past Reading railway station and along Vastern Road back to where we had left the car.  We’d very much enjoyed our first visit to Reading and our looped walk starting and ending at the riverside and hopefully we’ll be able to return to see more of the town later in the year. 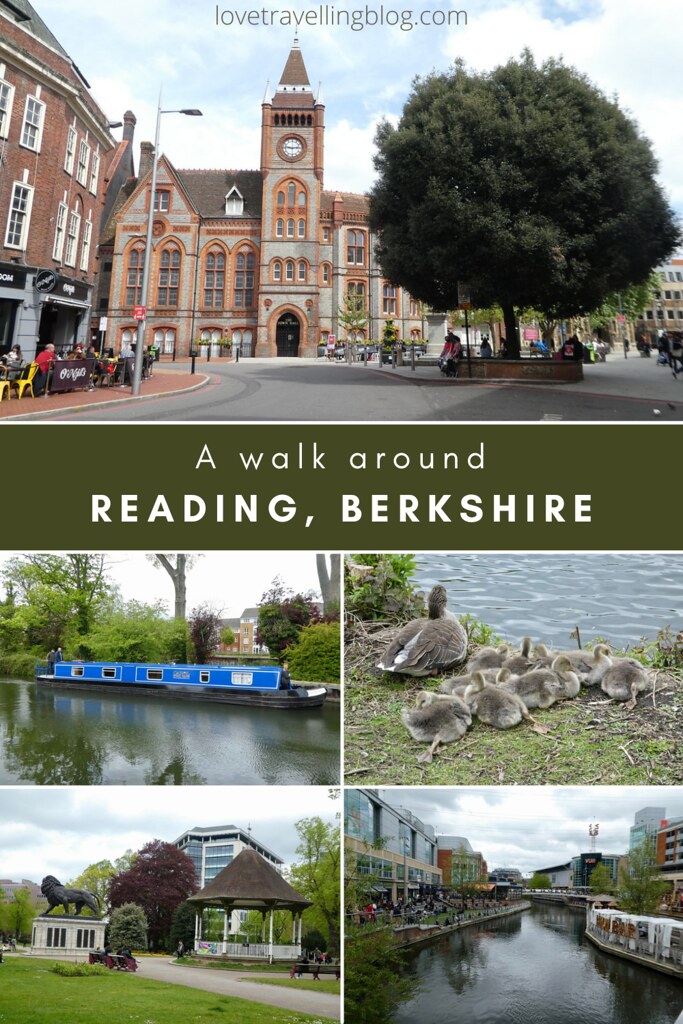 59 thoughts on “Reading – A Walk along the Thames”