The British overseas territory of Gibraltar is filled with historic sights, attractions and activities, more than enough to keep the whole family occupied for an entire week.  Here are my suggestions of the top 20 things to see and do.

1. Ride the Cable Car – take the cable car up to the top of the Rock, a stunning 6 minute journey then walk around the Upper Rock Nature Reserve.  The bottom cable car station is conveniently located near the southern end of Main Street close to the Botanical Gardens.  Views from the cable car are breathtaking and on reaching the top station you’ll probably be greeted with a troop of Barbary monkeys.  Gibraltar Cable Car

2. Look in awe at St. Michael’s Cave – the largest chamber of which has been transformed into a concert hall.  It feels like a magical experience with its glimmering red, white and grey stalactite columns, resembling a cathedral complete with pulpit, chancel and organ pipes.

3. Be a thrill seeker at the Windsor Suspension Bridge – a 71 metre long bridge suspended over a 50 metre deep gorge with spectacular views over the city and Bay of Gibraltar.

5. Brave the Skywalk – follow in the steps of Luke Skywalker by daring to step onto the Skywalk – a glass viewing platform 340 metres above sea level where you can enjoy more spectacular views.  It’s not at all scary and is perfectly safe with its floor and side panels made of four layers of laminated glass, strong enough to withstand the weight of 11 Range Rover vehicles.

In other parts of Gibraltar you can:

6. Relax in The Alameda Botanical Gardens – The gardens are free to visit and cover an area of 15 acres.  They were established in 1816 when the British Governor General commissioned a park for the soldiers stationed in the territory to enjoy relaxing in whilst off duty.

7. View animals in the Alameda Wildlife Conservation Park – nestled in one corner of the gardens.  Its mission is to care for exotic animals confiscated by Gibraltar customs and unwanted exotic pets.  The park also receives animals on loan from international zoos to raise awareness of endangered species through conservation.  Entrance to the wildlife park is a nominal £5 and a small selection of souvenirs can also be purchased at the kiosk to help fund the project.  Alameda Wildlife Conservation Park

8. Gibraltar National Museum – learn about the territory’s history.  Galleries cover the history of the Rock starting from the Pillars of Hercules, through to The Great Siege and continuing to life as it is today.  Of particular interest is the section dedicated to Neanderthal Man.  Two skulls from Gorham’s Cave were among the first Neanderthal remains to be discovered in Europe giving an unprecedented insight into what their lives might have been like.  Gibraltar National Museum

9. Learn about the resident apes with Monkey Talk Gibraltar – the territory is home to around 300 macaques and Brian Gomilla, a Barbary macaque expert is Gibraltar’s only qualified primatologist.  He runs Monkey Talk Gibraltar, taking small groups to observe a particular troop and to describe their interactions.  Tours commence during the two hours prior to sunset and start outside St. Michael’s Cave near the Jew’s Gate entrance to the nature reserve.  Monkey Talk Gibraltar

10. Tour a Gin Distillery at Spirit of the Rock – located on George’s Lane this is Gibraltar’s only gin distillery where you can join one of their hour long tours and tastings (£20).  Each tour ends with a generous glass of the Spirit of the Rock’s award winning London Dry Campion Gin.  It’s an opportunity to learn about gin and you also get some to drink too!  Spirit of the Rock

11. Return to bygone days at The Garrison Library – Founded in 1793 as a military library, it became a reference library and research centre in 2011.  This colonial building has been beautifully preserved and is filled with rare books and manuscripts stored in antique glass fronted cabinets.  Each room is furnished with comfortable armchairs and large fireplaces making it feel as if you’ve just stepped back in time to the days when officers of HM. Forces relaxed beside the fire with one of the leather bound books.  Garrison Library

12.  Spend a day on the beach at Catalan Bay – a sheltered bay located on the eastern side of the Rock.  This small bay is characterised by its picturesque colourful buildings, a hotel and seafood restaurants.  Sunbathe on the fine golden sand, swim in the clear blue sea and enjoy some freshly cooked fish in one of its restaurants.

13. Watch the weekly Re-enactment Ceremony – Each Saturday at 12.00 noon a group of dedicated volunteers parade down Main Street in period costume re-enacting the Ceremony of the Keys.  This symbolises the possession of the Fortress by Great Britain.

14. Walk across an airport runway – legally walk across the Gibraltar airport runway as Winston Churchill Avenue connecting Gibraltar to Spain cuts straight across it.  When an aircraft is due to take off or come in to land, barriers close for a few minutes to keep the runway clear.

16. E-Bike around the Rock – E-Bike Gibraltar are based at Ocean Village and from there you can take a three hour guided tour around the Upper Rock Nature Reserve or simply hire one of their e-bikes by the hour or half day to go at your own pace.  The e-bikes take the strain out of the steep hills allowing cyclists to exert as much or as little energy as they wish.  E-Bike Gibraltar

17. Go Dolphin Watching – departing from Ocean Village, take a 90 minute boat trip with Dolphin Adventures.  Gibraltar is renowned for its ever present population of wild dolphins and is one of the best places in the world for sightings.  Boats stop their engines approximately 60 metres from the dolphins so as not to disturb the pods but as dolphins are naturally inquisitive they are likely to approach the boat for all to see.  The specially designed viewing boats can cater for up to 70 passengers allowing ample space for everyone to view the marine life from the deck.  Dolphin Adventures

18. Climb the Union Jack Steps on Devil’s Gap Road.  These steps were originally painted in 1967 to celebrate Gibraltar’s first sovereignty referendum.  This street is also the quickest route on foot from the centre of town up to the Upper Rock Nature Reserve.

19. Go Shopping – take advantage of tax free shopping along vibrant Main Street which runs for almost 1 km through the heart of the city.  Find fresh produce and local delicacies in Gibraltar Market on the edge of Grand Casemates Square then pop into one of the many bars or restaurants for a relaxing drink or meal.

20. Take Afternoon Tea at The Rock Hotel – A time honoured tradition at the colonial Rock Hotel is afternoon tea served each day in the lounge bar and out on the connecting Wisteria Terrace overlooking Gibraltar harbour.  Silver cake stands arrive generously filled with double decker finger sandwiches, scones with clotted cream and jam plus a mouth-watering selection of cream cakes.  The Rock Hotel

For more inspiration on visiting Gibraltar you may also like:

A week in Gibraltar 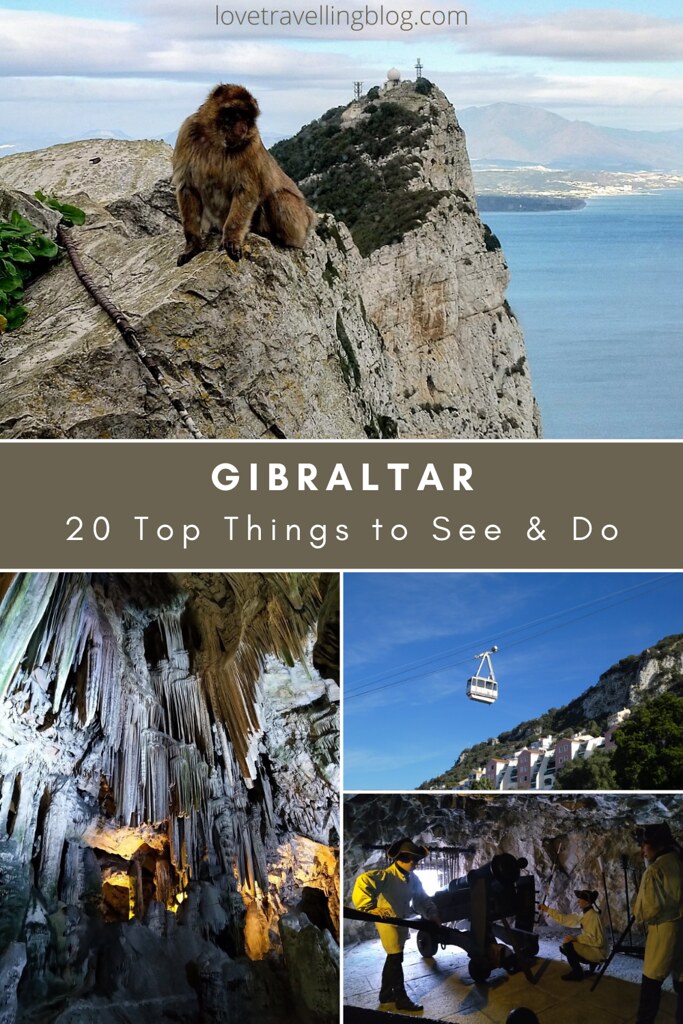