The picturesque riverside town of Christchurch lies a short distance from its larger neighbour Bournemouth on the south coast of England in beautiful Dorset.  The town is easily accessible as it is on the main rail line between London Waterloo and Weymouth and is well connected to nearby larger towns by regular bus services.

It was a bright, sunny day in early September and we began our visit with a walk along the pleasant high street which has the usual mix of well known brands and local independents.  A market takes place each Monday when the traffic is diverted to nearby streets.  It wasn’t market day when we visited but I gather there are around 50 stalls each week selling fresh produce, clothes, household items and plants and it brings many people into the town.

Part way along the high street stands the town hall overlooking Saxon Square.  The original building was constructed in 1746 in the Market Square but due to the rapid expansion of the town it was re-built on its present site just over a hundred years later.  The handsome building has a central domed cupola and weather vane forming an architectural feature typical of the period.  Saxon Square is an open-air shopping centre with numerous cafes spilling out onto the pedestrianised square.

Church Street leads on from the end of the high street until it meets the gates of Christchurch Priory.  There has been a church on the site for over 1300 years from the first Saxon building to the building we see today.

The priory is officially the longest parish church in the country and is in fact larger than 21 English Anglican cathedrals at 311ft 4 inches.  Admittance is free to view its lengthy nave, beautiful stained glass windows and elaborately carved choir stalls.

The Priory tea rooms are very pleasant with additional outdoor seating on the extensive church lawns for when the weather is good.  We chose to stop here for a lunchtime snack and found their scone, jam and cream tea to be really nice and reasonably priced at only £5.

Suitably refreshed, we continued on our way to Christchurch Castle and Norman Keep which lie just behind the priory.  The castle was a typical motte and bailey castle dating back to the early 12th century.

It’s chamber which is known as the Norman House is an unusually early survival of domestic Norman architecture in England.  The site is managed by English Heritage and is free to visit.

From the castle ruins we followed a path along the pretty Nuns Walk which runs to one side of the priory.  The shady path follows a stream that comes out by an old stone humped back bridge near to Place Mill, a restored Anglo Saxon water mill on Christchurch Quay, now home to a local arts and crafts centre.

There are few places more attractive than Christchurch Quay on a sunny day as the harbour sits at the confluence of the rivers Stour and Avon.  The area is actually known as The Quomps centred around large lawns and an elegant Victorian bandstand.

Quomps is derived from a name to describe a marshy area, with the quayside still prone to occasional flooding.  This open grassy area overlooking the river is home to the town’s summer festivals and is a lovely place to enjoy a picnic on a summer’s day or to just sit on a bench and relax watching the boats sail by.

We sauntered along the quayside, watching children feeding the swans and ducks before reaching the Splash Park play area which was crowded with children making the most of the warm, sunny weather.

Continuing slightly further I reached the Wick Ferry which transports passengers the short distance across the river to the Christchurch Wick Nature Reserve and the Tuckton Tea Gardens.  The service operates every day from Easter until October between 10.00 a.m. and 5.00 p.m.

Overlooking the ferry and riverside stands the upscale Captain’s Club Hotel with its sun drenched terrace being a popular venue for a lunchtime drink and a bite to eat.

After pausing here awhile ourselves we retraced our steps back into the town and along to the The Red House Museum and Gardens which we had hoped to visit but was unfortunately closed.  The museum is housed in a former Georgian workhouse and its collections include local history, costume and geology.  Hopefully it will be open the next time we are able to visit the town.

This concluded our walk around Christchurch, a charming little town especially on a sunny day like this.  Do try and visit if you are touring Dorset or Hampshire as I’m sure you would enjoy a few hours there too.

A walk around Poole, Dorset 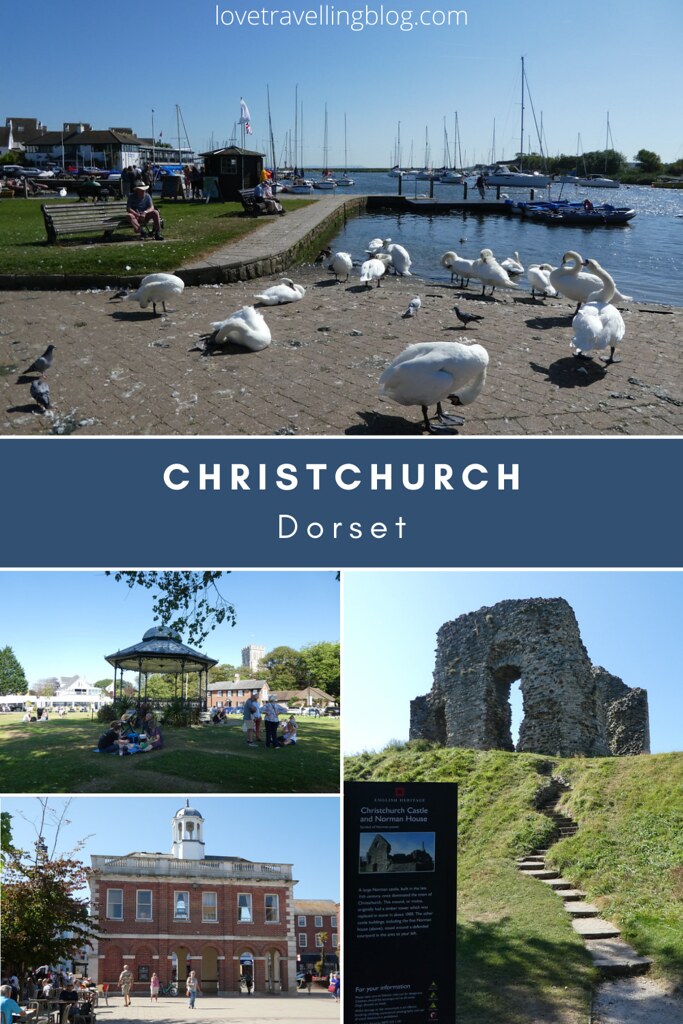 38 thoughts on “A walk around Christchurch, Dorset”