Edinburgh is undoubtedly a beautiful city with so many interesting things to see and do but it’s also the perfect base from which to explore more of Scotland.  After days out by train earlier in the week to both Stirling and Glasgow we then decided to visit the picturesque seaside town of North Berwick which lies 22 miles east of the capital.

It couldn’t have been easier to reach the resort as it’s just a short 35 minute journey by train from Edinburgh Waverley with standard off peak day returns at £7.40.  ScotRail operate a frequent service and as North Berwick is the terminating station on the line there’s no problem with looking out for where to get off.

After experiencing some gloomy weather earlier in the week, we were greeted with clear blue skies and a light breeze.  The pretty station is just a few minutes walk from the town centre with the route clearly signposted.  I fell in love with North Berwick as soon as we reached its high street adorned with hanging baskets and lined with high class shops, galleries and cafes.

It made me wonder why we hadn’t visited previously on one of our many trips to Edinburgh and it’s easy to see why the town is such a popular day trip for locals.  The high street runs parallel to North Berwick bay but one street inland from it.

After spending awhile looking around the shops we called in to the Coastal Communities Museum located above the local library on School Street.  This interesting small museum is run by friendly volunteers and is free to enter.  Here we were able to learn about the history of the town, step inside an Edwardian beach hut and even light up the original Bass Rock lighthouse lamp.

A temporary exhibition was taking place at the time of our visit featuring seaside postcards, some of which had never been on display before ranging from traditional seaside views to those of a more saucy nature.  Sending a postcard to friends and family was seen as an essential part of any holiday and usually included the message ‘Wish you were here’.  Sadly postcards are becoming a thing of the past with people now being able to take photos on their phones and send them to their friends almost instantaneously, I do hope they don’t die out as they are part of our heritage and finding a postcard on the doormat must surely still bring a smile to most people’s  faces.

On leaving the museum it was then just a short walk along to the seafront.  North Berwick has two beaches, the East Bay which we had just arrived at and the West Bay next to the golf course where we would be heading later.

Strolling along the promenade was very pleasant with views out to the famous Bass Rock jutting out from the Firth of Forth, a designated site of Special Scientific Interest and home to the world’s largest gannet colony.  The island is now a protected nature reserve with only the local Scottish Seabird Centre authorised to run boat trips to the rock.

The lovely sandy beach is dotted with rock pools with a boating pond at one end where children can paddle and go boating when the tide isn’t too far in.  Rising behind the town is a grass covered conical volcanic hill rising 187m (613ft) above sea level.  It’s known as The Law and is rather like Edinburgh’s Arthur’s Seat.  We didn’t have time to climb to the top but I gather it’s a fairly easy 30 minute hike along a grassy track with a rocky scramble near the top.  Definitely something I want to do on my next visit to North Berwick.

Continuing our walk along the sea shore it wasn’t long before we had reached the Scottish Seabird Centre, a charity dedicated to researching and protecting the local wildlife of the North Berwick coast.  Live web-cams allow visitors to view the creatures in their natural habitats with boat trips running until September when the gannets leave for warmer lands.  The exhibition explains the numbers of different birds and marine mammals the islands off the North Berwick coast attract.  We discovered that puffins, razorbills and seals are also frequently sighted.

Befitting of a seaside town famed for birdwatching is a life size bronze statue of an outdoorsy man peering out to the Bass Rock through a pair of binoculars.  This artwork is entitled The Watcher and was created by Scottish sculptor Kenny Hunter.

Located behind this statue stands the tiny old church of St. Andrews (Auld Kirk).  This white washed stone building is so small because it’s entire east end was swept away into the sea in a violent storm in 1656.  What was left of the church soon deteriorated and all that remained was the porch.  On looking inside the porch there are several items on display that were unearthed during excavations.  These include part of a table gravestone and a section of a grave slab thought to mark a knight’s burial in the 1200’s.

Just a few steps from the church lies the entrance to the historic old harbour, through a steel arch known as the Gannet Gateway.  The arch features three northern gannets, one taking off, one in flight and the other diving down.

The small harbour is built into a rocky promontory between the town’s sandy bays.  The red stone harbour walls and surrounding warehouses have changed little over the years with the grain store now converted into apartments and other buildings used as offices.

We walked all around the harbour and it was breezy to say the least when we climbed the stone steps to the lookout point and the end of the harbour wall.  It was worth the effort though to be able to take in the views of the long stretch of beach forming the town’s West Bay.

Wandering back along the side of the harbour we noticed a long queue forming outside the Lobster Shack.  Serving up mussels straight from the boat to a half lobster and chips, this small inauspicious looking cafe appeared to be extremely popular in these parts with the long line of people waiting.

On our walk through the town earlier, we’d passed The Ship Inn which was also doing a good trade on its outdoor terrace so we decided to eat there instead.  We were met by friendly staff and enjoyed bar meals and glasses of the local Belhaven beer.

After our relaxing lunch we set off back towards the station along the seafront where we came to North Berwick Golf Club with its championship links which has hosted final qualifying rounds for The Open.  Standing close to the pathway that leads down to the sea beside the golf course is a life size wooden statue of Ben Sayers.  The plaque read that at only 5’3″ he was a giant among golf professionals counting members of British and European royalty amongst his pupils.  The statue looked so pretty framed with flowering poppies and summed up for us what a beautiful little town North Berwick is.

Whilst waiting on the station platform for our train back to Edinburgh we admired the imaginative and colourful planting of perennials in three small wooden trains, an old station porter’s wheelbarrow and a bicycle.  We’d loved our visit to North Berwick and will definitely be returning next time we are visiting Edinburgh. 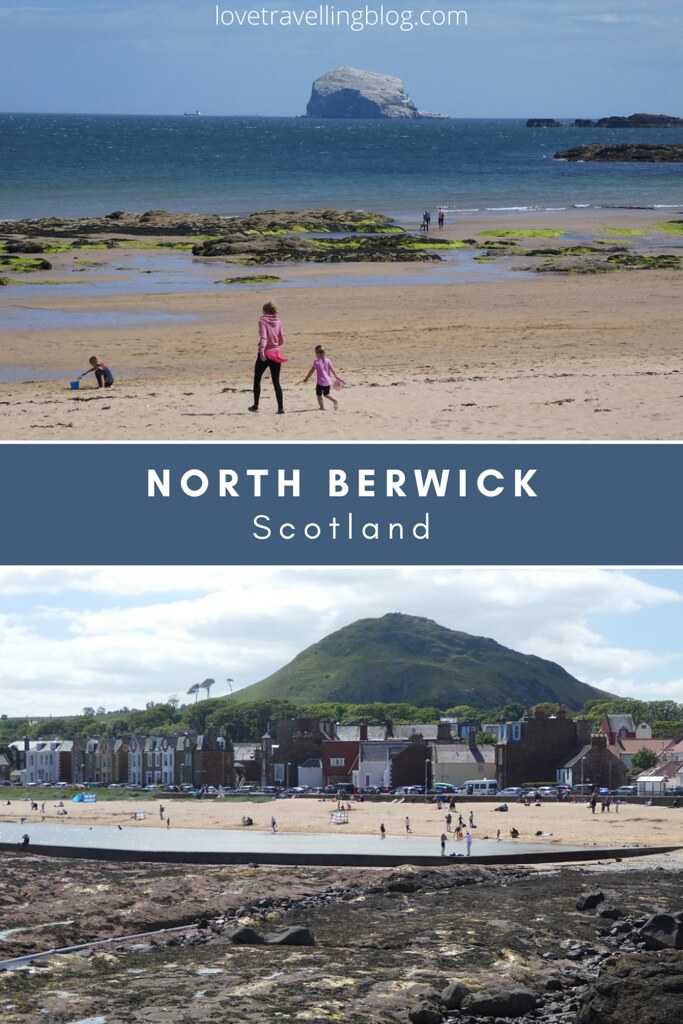