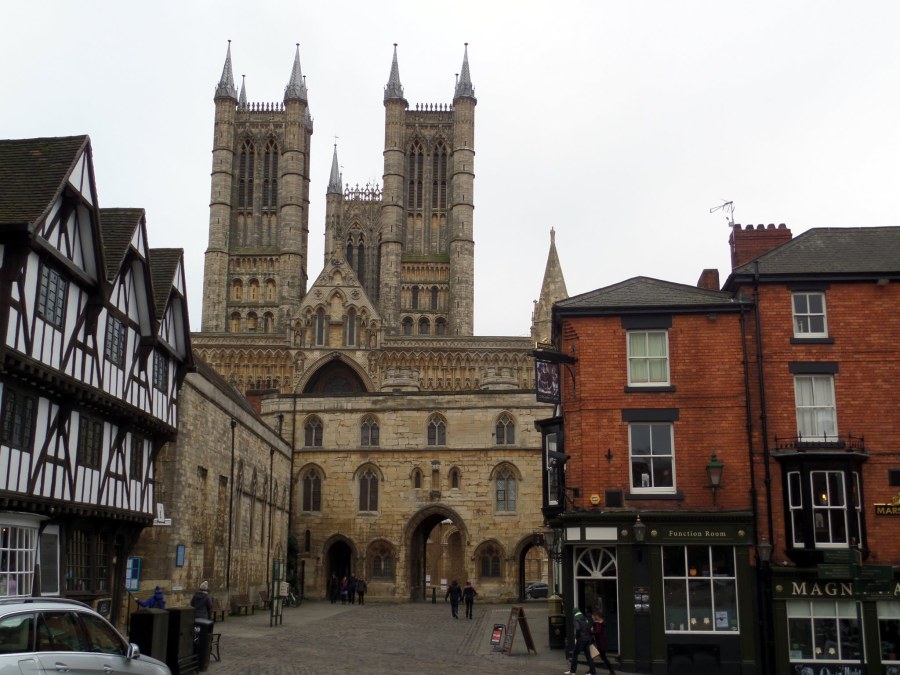 Lincolnshire has been up to now a county we have just passed through along the motorway, but finally we decided to stop for a few hours and take a look.

We left the car in the lower part of the town close to the Brayford Waterfront, a natural harbour on the River Witham now transformed into a leisure complex with shops, bars and pavement cafes overlooking the water.  Boat trips on the Brayford Belle can be taken along this scenic waterway during the summer months but they were not operating on our visit.

Overlooking the river is High Bridge, the oldest bridge in England to have houses built upon it, the structure dates from the 12th century and we chose to eat lunch at the Stokes High Bridge Cafe with its half timbered black and white Tudor exterior.

Moving on, we explored the Cornhill and City Square areas of the  town.  Along High Street are the usual household names but tucked in between you will find some independent gems housed in beautiful historic buildings.  The medieval centre has an abundance of original 14th and 15th century buildings together with a large number of half timbered Tudor houses.

A few steps further on we came to Stonebow, a stunning Tudor and Gothic bridge that once formed the city’s southern gate.  Interestingly, the City Council still hold their meetings above this archway.  Continuing through the archway we arrived at the foot of Steep Hill which, as its name suggests, is a very steep cobbled street connecting the lower and upper parts of the town. Built by Romans, it was voted ‘Britain’s Great Street’ in 2012.  Antique shops, galleries and bookstores sit alongside tea shops, pubs and restaurants in delightful, historic buildings.

As we approached the top of the hill the Cathedral came into view.  Lincoln Cathedral is the third largest in Britain with a vast nave supported by columns of marble and limestone.   Adjacent to the cathedral we viewed the ruins of the Bishop’s Old Palace from a time when the Bishops of Lincoln were among the most important people in the country.

Across from the cathedral stands Lincoln Castle which still functions as a court as it has done for more than 900 years.  We would have liked to have taken a tour around the castle but unfortunately it was closed for renovation on the the day we visited.

After all these years bypassing the city we now wish to make a return visit to view inside the castle and take a river trip.  Lincoln is certainly worthy of a visit, we were most impressed!