We planned a day in Oxford and arrived into the city’s rail station mid morning.  Oxford is located mid-way between London and Birmingham both approximately 60 miles (96 km) away and with trains from London Paddington taking from only 52 minutes it makes an ideal day out from the capital.

It was a bright, pleasant morning and so pleasing to be able to be out and about once again.  We started our walk in the Oxford Castle Quarter, a ten minute walk away.  On leaving the station by its main entrance we walked up Hythe Bridge Street before making a right turn by Royal Oxford Hotel.  From there it was just a short stroll down Park End Street to reach Oxford Castle.

Oxford Castle is a partly ruined Norman castle which suffered extensive damage during the English Civil War.  The site served as the Royal Castle from where the city and the upper reaches of the Thames Valley were administered for seven hundred years.  From the 18th century the remaining building became the city’s prison and following its closure in 1996 has since been re-developed into a hotel and visitor attraction.  We’d arrived a week before the museum was due to re-open but I’d like to take a tour on a future visit to the city to view the 18th century cells and climb to the top of St. George’s Tower for some panoramic views of the city.

Surrounding the castle are several bars and restaurants, all currently looking beautiful with an abundance of flowering wisteria covering their terraces.  After popping into one of the cafes there for our morning cappuccino’s we were ready to set off again, this time for a spot of shopping in the modern Westgate Centre located close by via a landscaped walk along Castle Mill Stream.

The shopping centre is named after the West Gate, a former gateway into the city centre during the 17th century and is home to over 100 high street brands.  We popped into John Lewis which is one of our favourite stores and also a branch of Uniqlo for a look around, before moving on.

Our next destination, The Oxford Botanic Garden was just ten minutes away and easily accessed via Queen and High Streets to its home on the aptly named Rose Lane (Standard admission £5.45).  Oxford became the first botanic garden in the UK in 1621 at the country’s oldest university.  The garden acts as a resource for research, education and conservation of future generations of botanists.

The garden is divided into various sections with the walled garden featuring a medicinal collection of species.  The geographic borders consist of collections covering the Mediterranean, South Africa, South America, New Zealand and Japan highlighting the diversity of these regions.

The Lower Gardens border the River Cherwell and contain ornamental collections including the rock garden with its many Mediterranean plants.  Being a gin lover I was very interested to view the Gin Border in which plants commonly used in the production of the spirit are grown.

Strolling through a stone archway we’d arrived at the seven glasshouses which despite being closed looked beautiful surrounded by flowering tulips.  We were able to peer through the windows to get a glimpse of the Water Lily House and the Tropical Jungle to tempt us back when they re-open.

This stretch of river adjoining the garden is a private footpath for garden visitors only and the views of the large number of punts surrounded by Spring flowers looked stunning.  It was just so sad to see them out of use, but hopefully not for much longer.

As we were leaving the garden dark clouds threatened and there was the occasional spot of rain, but not to be deterred we continued with our walk as planned.  It was just a five minute walk to Christ Church Meadows, a park formed when Cardinal Wolsey purchased a large amount of land to build Christ Church College in 1525.  We entered through a gate at the eastern end of the Meadow close to the garden.  The meadow still belongs to the college sitting on its north facing side. The meadow is enclosed by the rivers Cherwell and Thames, the latter being known as the Isis as it flows through the city.

As we wandered along the Broad Walk the skies became leaden and there was the occasional clap of thunder which soon turned into a torrential storm.  As there was nowhere suitable to take shelter we put up our hoods and plodded on.  The waterside paths are well maintained but large puddles soon formed and my shoes squelched with the downpour.  Thankfully the storm passed within 15 minutes and I was again able to get my camera out.  The college maintains a herd of Longhorn cattle which graze on the meadow for much of the year but were either elsewhere or taking shelter as we passed.

It had brightened up a little by the time we reached the Jubilee Bridge which links the Meadow with the college sports ground.  The bridge was installed in 2013 on the site of a former punt crossing.

After the bend in the river, splendid views of Christ Church came into view. Although noted for its famous college it is also home to Oxford’s Cathedral which has its own world famous choir.

We left the riverside by the main entrance to the college alongside the War Memorial Garden at St. Aldates.  This attractive small garden is a permanent memorial to the men and women who lost their lives in the Second World War and subsequent conflicts.

Continuing on our way and managing to dry out a little following the storm it was a ten minute level walk to Radcliffe Square, the home of the magnificent Radcliffe Camera.  The building was designed by James Gibbs in neo-classical style and was completed in 1749.  Camera is Latin for room and the Radcliffe Camera containing the Radcliffe Science Library was where we were heading next.

The Bodleian Old Library is one of the oldest libraries in Europe and is the main research library of the University of Oxford.  It contains over 13 million printed items and is the second largest library in Britain after the British Library.  Whilst it was not yet open to the public, it was still a thrill to be able to walk through its courtyards which are absolutely stunning with their architectural and academic details.

We had now arrived on Broad Street which is home to Trinity and Balliol Colleges.  Visiting the colleges is currently suspended but when they re-open, I recommend touring several of their buildings and beautifully manicured quads.

Our tour of the city then took us to the Oxford Covered Market, a  five minute walk taking us along to the market hall.  This historic market just off the High Street was established in 1774 and it was good to see traditional butchers, greengrocers and a wonderful cheese stall.

After stocking up on cheese, there was just one more place we wanted to go and that was for a short walk along the Oxford Canal which we accessed from Hythe Bridge, about ten minutes away on George Street.  Although Oxford is most famous for its colleges, it’s also the starting point for the Oxford Canal Heritage Trail and with the  weather  better than it had been all day, it seemed a good opportunity for a canal side walk.

Marking the start of the heritage trail is a circular monument commemorating the bi-centenary of the canal.  After reading the plaque we strolled along the towpath passing a row of houseboats on our way.  The towpath borders the castle mill stream to one side and the canal to the other.

As we approached Isis Lock we noticed a boat about to pass through so we paused  to watch for a few minutes.  I think it must have been one of the smallest locks that I’ve ever come across as it was so narrow.  I discovered that the original Isis Lock was twice the width that it is today to enable wide barges laden with goods to pass through but in 1844 it was made smaller to only admit narrowboats.

We spent a few minutes chatting to the boaters who told us they had just picked up the boat the previous day but had soon got used to handling it.  Setting off again we passed the base of the boat hire company College Cruisers who have a fleet of boats named after Oxford Colleges.  We spotted Keble, Pembroke and Nuffield all brightly painted as we walked along.

Nearing Jericho, which was Oxford’s first planned suburb, we admired Victorian houses with pretty rear gardens leading down to the canal.  We would have loved to have continued as far as Wolvercote but were conscious of the time and needed to return to the station.

Just before the Isis Lock we followed a signpost to the station which cut a large corner off our walk, saving us quite a lot of time.

A day in Abingdon, Oxfordshire 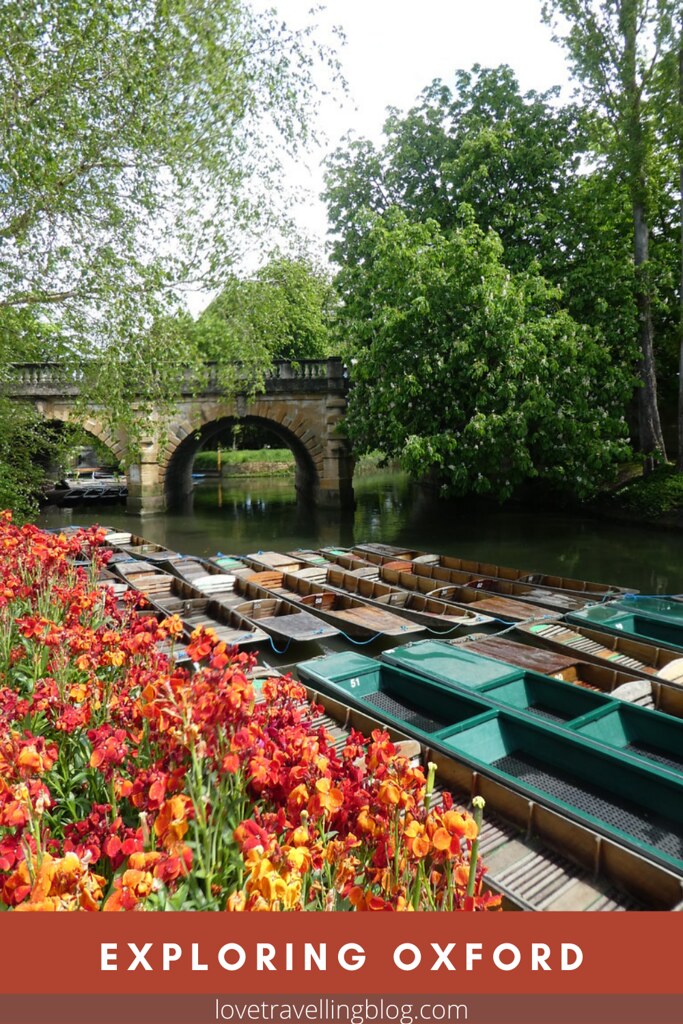 83 thoughts on “A Walk Around Oxford”