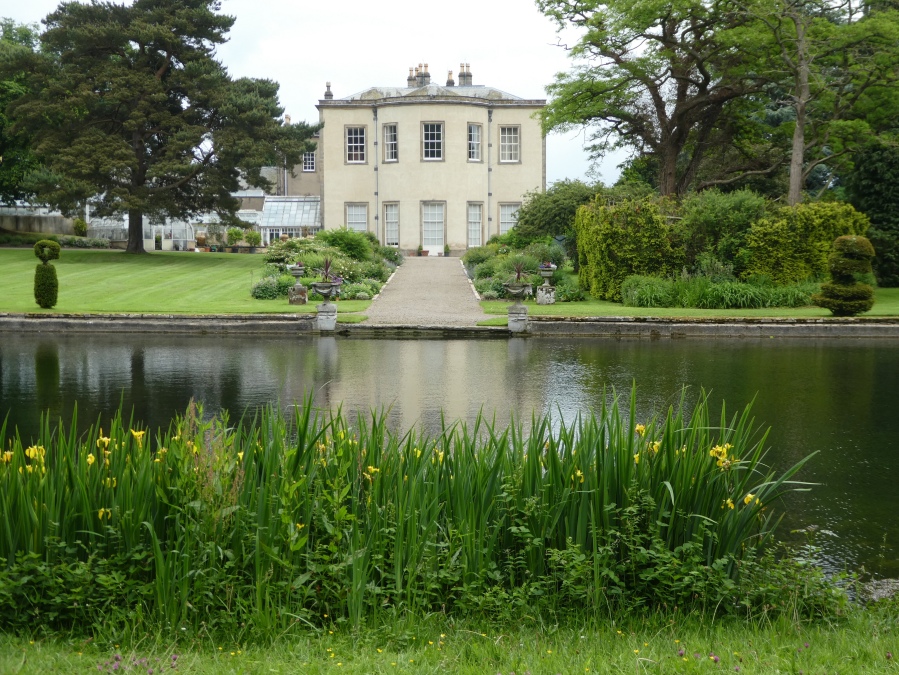 I’ve always enjoyed woodland walks and when it was suggested that we visit an arboretum I was eager to explore Thorp Perrow Arboretum, which boasts one of the largest collections of trees and shrubs in the north of England.  These include the national collection of Ash, Lime, Laburnum, Walnut and Cotinus.  The Arboretum is located two miles from Bedale in North Yorkshire, 35 miles (55 km) north of Leeds.

Finding a space in the large car park, we picked up a map with our tickets before setting off to explore the Arboretum.  The history of Thorp Perrow can be traced back to the Domesday Book where it was listed as ‘Torp’ Manor House without any trees at that time.

Four major planting periods have taken place over the years with parkland trees dating from the 16th and 17th centuries.  In the mid-1850’s seeds were imported from America which now make up the Milbank Pinetum.  The design and planting of the Arboretum began in 1931 with a final phase of 1,500 new trees and shrubs being planted in the 1980’s when it was first opened to the public.

There are nature trails through the grounds with a special children’s trail and a tree trail taking in some of the rarest and largest trees.  Rather than follow one of these routes, we studied our map and set off along one of the shady paths leading from the entrance from where we followed a boardwalk trail to the Bog Garden.  Here we found a carpet of wildflowers in hues of pink and blue which looked absolutely beautiful.  Each section of the Arboretum is inter-connected via paths, grass walks, glades and avenues providing scenic walks of differing lengths.  We continued through the Spring Wood towards the lake from where we could see the Ropner family’s private residence.  This elegant house has wide, sweeping lawns running down to the lake.

There was a small wooden bridge over to Kate’s island where we relaxed on a bench admiring the stunning views in this tranquil setting.  It was an overcast day with only occasional glimpses of the sun peeping through the clouds but on a clear, sunny day it would make a perfect spot to rest awhile.

Our morning stroll continued through the Millbank Pinetum, through the Holly Glade and then along Birch Avenue.  We noticed that all the trees are numbered, rather than named and are listed in a catalogue which can be obtained from the ticket office.  Fifty one of the trees at Thorp Perrow are Champion Trees which are recorded and designated by the Tree Register of the British Isles as being the largest and most impressive of their species.

Located in the old walled garden at the far end of the Arboretum and popular with families, we came across the Bird of Prey and Mammal Centre.  Flying displays take place twice daily with an opportunity to meet the owls at 11.30 a.m. each morning.  To one side there is also a paddock with farm animals and goats.

We then continued along Birch Avenue leading to the Jubilee Oak which is located at a focal point linking several paths.  This majestic oak tree was planted in 1935 to mark the silver jubilee of King George V and has a bench encircling its trunk making it a good spot to sit and enjoy a rest.

We returned to our starting point along the Main Avenue which is dominated by a stone pillared monument.  Unlike a cultivated garden, the Arboretum’s grass paths are mown on a regular basis but other areas are only mown once a year to provide an ideal habitat for wildflowers, rhododendrons, hydrangeas, insects and fungi.  Although the Arboretum is beautiful to visit at any time of year, it will undoubtedly be at its best in autumn as the leaves turn to shades of gold and scarlet.

After our pleasant walk we were ready for some lunch in the attractive tea rom which has seating indoors and on its terrace.  There was a varied selection of dishes to choose from and our poached salmon salad and ploughman’s lunch were both delicious.  Afterwards, I couldn’t resist tucking into a slice of my favourite coffee and walnut cake with a pot of tea.

Before leaving Thorp Perrow we had a look in the plant centre for some geraniums to brighten up the tubs on our patio.  It was then back in the car for the short drive into Bedale, two miles to the north.

We really enjoyed our short visit to this small market town which is full of character, its history dating back to the Domesday Book in 1086.  In the 13th century the town gained its market charter and a market still takes place along its wide high street every Tuesday.  Bedale has some lovely small shops with old fashioned greengrocers, butchers and artisan bakers alongside gift shops and cafes.

Before returning home, there was one more place we wanted to visit and that was Northallerton, nine miles from Bedale.  Northallerton is the county town of North Yorkshire and has good rail connections being on the East Coast main line between London and Edinburgh.

Wednesdays and Saturdays are market days in Northallerton and thankfully the stall holders were still trading at 3.30 p.m. as we explored the high street.  Northallerton is much larger than its neighbour Bedale and is a prosperous town with high class shops and cafes stretching along both sides of the market place.

We enjoyed looking around Barkers, an absolute gem of a department store.  It’s a local institution, having been established in the town since 1882.  Nearby, we spotted a branch of Betty’s Cafe and Tea Rooms who also have branches in York, Harrogate and Ilkley.  It was a joy looking around the shops, many of them small, independent retailers.  We browsed the market stalls buying some fresh vegetables and returned to the car to head back home after a lovely day out in this part of North Yorkshire.

I would like to thank Thorp Perrow for kindly inviting me to visit the Arboretum and as always all opinions are my own.

93 thoughts on “Thorp Perrow Arboretum in the Yorkshire Dales”

Thinking of a few days in Bristol? I've just returned and stayed in this swanky apartment in the gorgeous Clifton district. To find out more why not check out my newly published blog post and be inspired to visit too! @yourapartmentuk @visitbristol #Bristol #luxurylifestyle #clifton #escapetheeveryday #yourapartmentuk #lovetravelling #review
You'd probably think that these gorgeous old buildings are somewhere like Germany but you'd be wrong as they are to be found in the old town of Bristol. This vibrant area is filled with attractive pubs in this former dockside part of the city. Hope the sun is shining for you this weekend and you are getting out and about too. @visitbristol #Bristol #bristolpubs #oldbuildings #escapetheeveryday #lovetravelling #flowerboxes
We loved walking across the beautiful Clifton Suspension Bridge crossing the Avon Gorge in Bristol. Do you have a favourite bridge if so I'd love to hear. You might like to read about our day visiting Bristol Zoo, Clifton Observatory and the beautiful Clifton Village in my newly published blog post by clicking on the smart bio link above. @visitbristol @brunelsbridge @bristolzoo @cliftonobservatory #bristol #cliftonvillage #cliftonsuspensionbridge #bristolzoo #cliftonobservatory #thisprettyengland #visitengland #lovetravelling
Fraser bear is sitting on the dressing table looking after my Great Yorkshire Show badges reminding me of the wonderful days I've experienced there. #teddybear #fraserbear #badge #scarf #happymemories #harrogate #countryshow #travelblogger @houseoffraser
What a week, after last year's event having to be cancelled there were smiles all round with four full days of fun and action at @greatyorkshireshow in Harrogate. Everything worked well and we all felt perfectly safe. Not only that we enjoyed wall to wall sunshine! I've returned home with fond memories and look forward to returning next July. #Harrogate #YorkshireShow #Showjumping #myharrogate #VisitHarrogate #countryshow #brassband #horses
The afternoon tea garden at the Great Yorkshire Show. How wonderful it was to be back there, returning to things that we hold dear. Congratulations to @greatyorkshireshow for going ahead with this year's event. #greatyorkshireshow #afternoontea #harrogate #summertime #garden #flowers
We recently spent a day exploring Stroud in Gloucestershire. It's a lovely little town with its steep, winding streets full of interesting small shops and cafes. Do take a look at my newly published blog post to find out more.#stroud #gloucestershire #canal #canalwalk #escapetheeveryday #visitengland #thisprettyengland #lovetravelling
Renting e-bikes is a perfect way to explore the beautiful spa town of Cheltenham as you can cycle along the Regency Town Trail which is suitable for all the family. Do have a read of my newly published blog post to find out more and be inspired to visit. @visitcheltenham @compassholidaysuk #TheBicycleHub #cheltenham #ebiking #cycling #cheltenham #cotswolds #ourchelt #visitengland #thisprettyengland