With cheap air fares, Warsaw is perfect for an inexpensive weekend break.  The Polish capital has much to offer with its picturesque old town, historical landmarks, museums and parks yet is often overlooked in favour of Krakow.

We took an early morning flight with Ryanair from Leeds-Bradford airport, arriving into Warsaw Modlin 35 km north west of the city centre just before noon.  From a machine outside the arrivals hall we bought Warsaw bus shuttle and train combination tickets 20zl (£3.60) each to the city centre.  The shuttle bus takes approximately 8 minutes and connects to the train with a total journey time of 45 minutes.  Alternatively passengers can take a direct bus service with single tickets £7.60.

We chose to stay at the Polonia Palace Hotel conveniently located close to the Palace of Culture and Science and just a short stroll from the central station.  This historic four star hotel has been the hotel of choice for ambassadors and diplomats through the decades.  It’s now been tastefully updated yet retaining its elegant charm and offers good value room rates.  A bonus is that with check-in from 2.00 p.m. guests can access their rooms on arrival into the city centre.

Below are suggestions of places to visit during your stay.

Begin with a visit to the Palace of Culture and Science which dominates the skyline and can be seen throughout the city.  The building was completed in 1955 on the orders of Stalin and contains a staggering 3,000 rooms over 42 floors.  Take the lift to the viewing terrace on the 30th floor 114 metres high.  On a clear day there are stunning views over the old town rooftops and across to the River Vistula.  Palace of Culture and Science, standard admission 20zl.  The palace is also home to theatres, a cinema, museums and the city’s tourist information office.

Stop off for lunch on a sunny terrace of one of the inviting cafes and bars that line the Old Town Market Place and sip a drink whilst watching the world go by.  Don’t miss viewing the Mermaid statue as it is the symbol of the city.

Walk along the old city walls for some superb views of the city.  Only fragments remain with the best preserved stretches near to the Royal Castle.

Located in front of the Royal Castle and commemorating Polish King Sigismund III Vasa, who in 1596 moved Poland’s capital from Krakow to Warsaw.

The castle was the former royal residence of Polish rulers.  Explore the Royal apartments, the throne room, and its art collection with paintings by Rembrandt and Canaletto.  Outside stroll through its beautifully reconstructed gardens.

Located next to the Royal Castle and one of Warsaw’s oldest buildings with its attractive neoclassical facade.  Climb the bell tower for a bird’s eye view of the city.

The Royal Route connects three former residences of Polish rulers, the Royal Castle, Royal Lazienki Palace and Wilanow Palace.  Most of the city’s historic sites are to be found along this Royal Route which starts from the Royal Castle in the heart of the old town and leads to Wilanow Palace, a distance of 1.5 km.  Along the way pause to admire the neo-classical Presidential Palace and the University of Warsaw main campus next door.  Wander through the Baroque gates of the University and take a stroll through its campus.

Continue along wide tree lined avenues heading towards Belvedere Palace, flanked on one side by embassies and on the other by Park Ujazdowskie.  This park was laid out in 1896 and is a delight to stroll through with its lake, fountains and bridges.

The park is home to a winter garden, a Chinese garden and an amphitheatre where you’ll find a large statue of Frederic Chopin, the distinguished Polish composer and virtuoso pianist.  Each Sunday afternoon from May – September listen to a Chopin piano recital by the monument.

This was the summer residence of King Jan III Sobieski before becoming the first Polish museum in 1805.  The palace is lavishly furnished with elaborate decorations and is surrounded by Italianate gardens and is often referred to as the Polish Versailles.

Walk along the ‘left bank’ (west) riverside promenade which extends for 1 km from near the Copernicus Science Centre to the old town.  This newly re-developed broad boulevard is popular with both walkers and cyclists.  Floating barge restaurants line its banks along with a mini beach to keep children happy.

Located between the river and the old town this park is a venue for summer concerts and where water, light and sound shows take place after sunset on summer weekends.

Gościniec specialises in Polish pierogi (dumplings with a variety of fillings) and has a branch in the old town.  Gosciniec Restaurant

The city is home to some world class museums including the National Museum, Museum of Warsaw and the POLIN Museum of the History of Polish Jews.  Further details can be found by following the links below to my previous visit to Warsaw during the winter months when I visited many of the city’s museums. 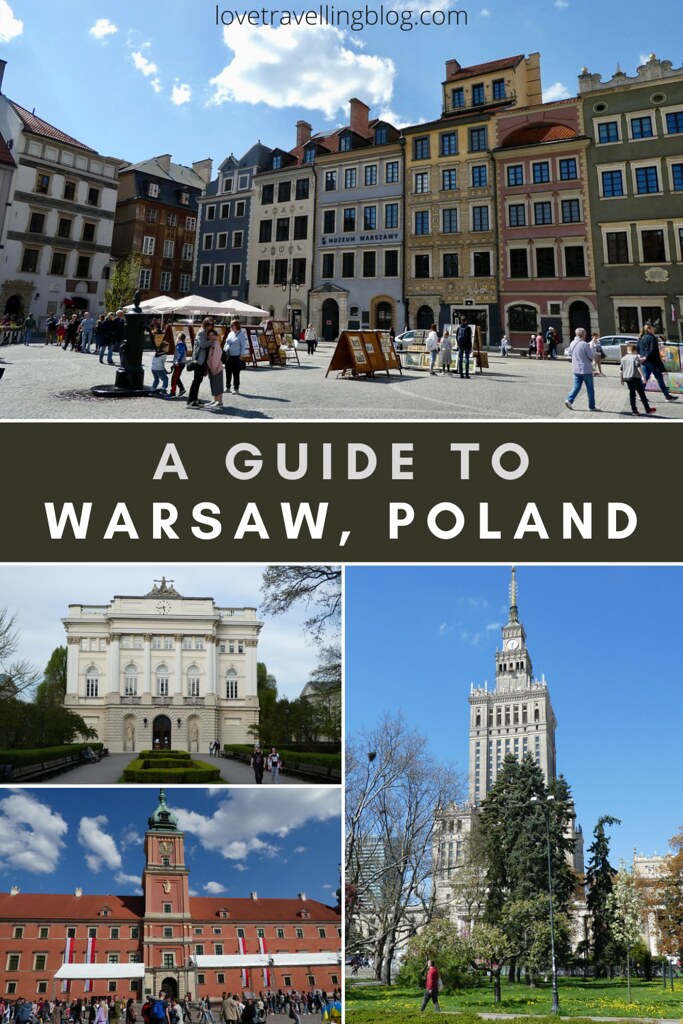