MANCHESTER – WHAT TO SEE AND DO

Located in Albert Square and one of the most iconic landmarks in the city.  It’s a fine example of Neo-Gothic architecture in the United Kingdom.  Constructed in 1877 at a cost of £1m and containing more than 14m bricks it’s a joy to behold.  The Town Hall features a 280 ft high clock tower with three clock faces and 24 bells.  The building is currently closed for major renovations but we can all look forward to visiting when it re-opens in 2024 and to viewing its Sculpture Hall and vast Great Hall displaying coats of arms from the towns Manchester traded with.

Visit the cathedral on Victoria Street and take a look at its impressive interior and wood carvings.  Look out for the carvings of bees on the roof which are the symbol of Manchester’s industry.  30 minute guided tours are available with a suggested donation of £3 (admission to the Cathedral is free).

Just steps away from the cathedral is the vibrant Exchange Square created after the devastating 1996 Manchester IRA bombing.  The attractive square has tiered walkways and seating which are utilised as audience seating when events are held in the square.  At other times sit in front of the Corn Exchange and happily while away an hour or so with a drink and a bite to eat whilst watching the world go by.

This building was originally used as a corn exchange and previously known as the Corn and Produce Exchange.  Renovated in 1996 it now houses an aparthotel, restaurants and bars.

An historic square adjacent to Exchange Square and home to four popular pubs.  The term ‘shambles’ comes from the name of the street where butchers would slaughter meat as in the famous Shambles narrow road in the centre of York.  The Wellington Inn is now the only surviving Tudor building in the city centre.

The city’s central business district reaches down to the River Irwell and is Manchester’s answer to London’s Canary Wharf, do go there as it doesn’t disappoint.  It’s one of Manchester’s top destinations for shoppers, foodies and party-goers.  The LeftBank is a celebration of all things independent with its vibrant waterfront bars and restaurants.

Its also home to The Avenue where you’ll find a collection of designer stores including Emporio Armani and Mulberry.

Located on the edge of Spinningfields is the The John Rylands Library, part of the University of Manchester and one of the most spectacular libraries in the world.  The historic entrance hall and main staircase lead up to the reading room which is one of the finest reading rooms of any library.  Statues of Mr & Mrs Rylands grace each end of the huge cathedral like space whilst stained glass windows celebrate the achievements of individuals from the world of arts and science.  Entrance free.

An open space in the heart of the city. It’s surrounded by a mix of historic and modern buildings, offices and restaurants.  It’s also a major interchange for buses and trams.

The huge Museum of Science and Industry showcases the city’s achievements and includes sections on aircraft, locomotives, textiles and technology.  We just love calling in to view one of the exhibitions when we have some time.  Entrance free.

For any football aficionado, a visit to the National Football Museum is an absolute must.  As Manchester is home to arguably two of the world’s best teams it seemed appropriate to locate the museum here and it has been welcoming visitors since 2001.

This museum tells the story of British people’s lives at home, at work and at leisure over the last 100 years.  It’s located in a former hydraulic pumping station on the corner of Bridge and Water Streets.

Make sure you visit Chinatown just behind Piccadilly on Faulkner Street.  It’s the second largest in the UK with an impressive Imperial Chinese archway and lots of authentic restaurants, bakeries and grocery stores.  It’s the main cultural hub for Chinese families in the north of England and thousands of visitors flock to the annual Chinese New Year Festival in February to view the large parade and lion dancing.

A gleaming digital destination on the banks of the Manchester Ship Canal.  It’s home to BBC North and ITV including the ever popular soap opera, Coronation Street whose fictional home Weatherfield is based here.  Easily accessible by tram in around 20 minutes from the city centre.

Home to two theatres and an art gallery featuring the works of local artist L.S. Lowry, famous for his paintings of urban landscapes with human figures.  The gallery located on the upper floor contains the largest public collection of the artist’s work.  His paintings are mostly of local industrial districts and incorporate his trademark ‘matchstick men’ figures.  Admission free.

Part of the Imperial War Museum housed in a distinctive steel building.  This iconic building represents a globe torn apart by conflict.  It was designed by Daniel Libeskind and admission is free.  Touring the galleries is a moving experience as the powerful stories depict how war shapes lives, from reading a soldier’s last letter home to viewing a twisted piece of metal from New York City’s World Trade Centre – so sad but so real.

In need of some exercise, then take a tram to Heaton Park.  Really easy to get to as it has its own tram stop close to the entrance gates.  This vast park has a large boating lake, with a woodland trail surrounding it.

Take a canal side walk through the heart of the city.  The Rochdale canal runs from the Bridgewater canal at the Castlefield basin across the Pennines to join the Calder and Hebble Navigation at Sowerby Bridge in West Yorkshire, a distance of 32 miles.  Starting from Piccadilly Railway Station, leave from the main exit and go down the station approach ramp.  After continuing along the road for approximately 100m you will reach the canal, just needing to cross the road to descend a short flight of stone steps that lead down to the Rochdale canal towpath.

The towpath is quite wide along here and cycling with care is permitted.  Enjoy the peace and tranquillity of viewing some of Manchester’s historic buildings beside the canal from converted old warehouses to bars and modern style urban waterfront apartments.

Pause for a drink sitting out on one of the terraces of the waterside bars before returning to the centre via Liverpool Road and Deansgate.

A pedestrianised street running from Exchange Square filled with designer stores including Harvey Nichols and Selfridges.  It’s also near the huge Arndale Centre where you’ll find all the usual high street names.

An elegant square in a conservation area surrounded by shops, bars and restaurants.  It takes its name from St. Ann’s Church overlooking the square and is also home to the Royal Exchange theatre based in the former Manchester Cotton Exchange building.  The square looks even more enchanting in December when it is adorned with twinkling lights and stalls from the Christmas market.

For much of the 20th century this was the centre for north west banking and is characterised by its many notable iconic buildings.  An eclectic mix of high end stores and dining options.  In June each year a two day street festival takes place featuring alfresco dining and live music.

After shopping, head to this landmark 47 storey skyscraper at a height of 169 metres.  It’s the tallest building in the U.K. outside of London.  Take the lift up to Level 23 and enjoy cocktails in Cloud 23 whilst taking in the panoramic city centre views.  The bar is cantilevered out by 4 metres and can been seen by the dark ‘stripe’ on the tower.

Located along Canal Street, this narrow car free road buzzes with activity with its many bars and cafes having terraces overlooking the Rochdale Canal.  Don’t miss viewing the memorial to the gay mathematician and World War II codebreaker, Alan Turing in the adjacent Sackville Gardens. 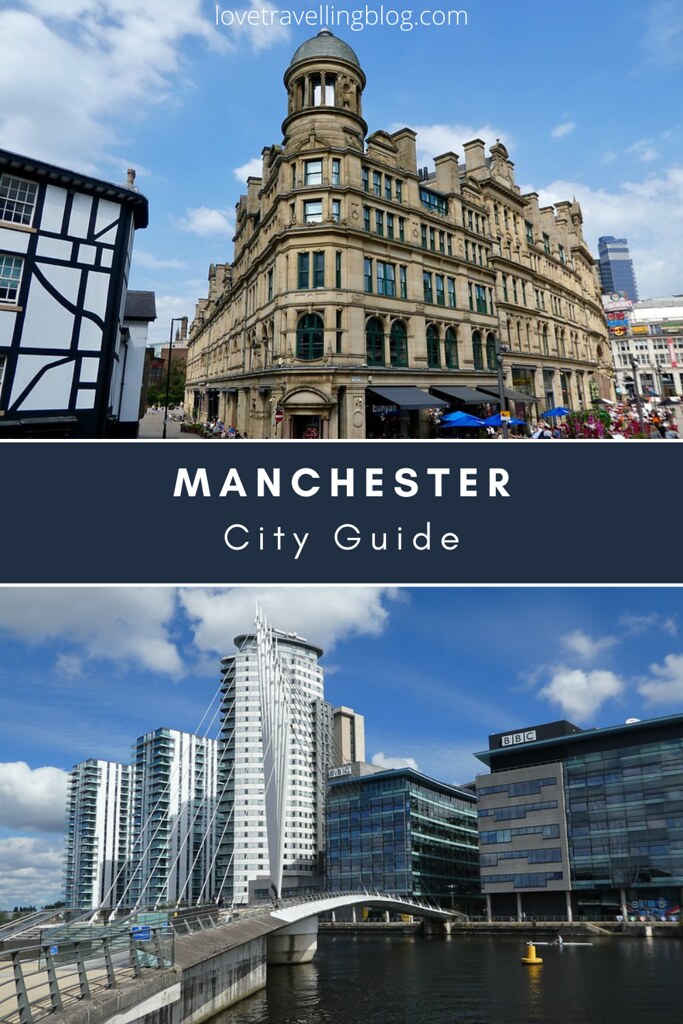 78 thoughts on “Manchester – a travel guide”