Belfast is the vibrant capital of Northern Ireland and the perfect destination for a city break with a host of attractions to keep the entire family happy.

By sea: there are regular crossings from both Scotland and England on super fast ferries with journey times from just one hour.  Stena Line (Liverpool and Cairnryan), P&O Irish Sea (travelling from Cairnryan) and Isle of Man Steam Packet Company from the Isle of Man.

Belfast City Hall – a majestic building dominating Donegall Square in the city centre.  Take a one hour free guided tour (when available) and marvel at its beauty.  Located in the grounds is the Titanic Memorial Garden, a quiet area of reflection and a monument to all those who lost their lives on RMS Titanic in April 1912.  Belfast City Hall

Titanic Belfast – Its nine galleries tell the story of the historic shipyard from boomtown Belfast at the time of the ship’s construction at the beginning of the 20th century to Titanic’s fateful maiden journey.  Take a ride on an indoor cable car with a fascinating journey through the sights, sounds and smells of the Belfast shipyard.  Titanic Belfast

Belfast Cathedral – also known as the Cathedral Church of St. Anne.  It has been a place of worship in the heart of the city for more than a century.  Step indoors, admire its exquisite baptistry and gaze up through a glass platform to view the Spire of Hope. Belfast Cathedral

Ulster Museum – head over to the Queen’s Quarter to learn about the nation’s history.  Delve into the museum’s impressive Irish collection and come face to face with dinosaurs and an Egyptian mummy. Ulster Museum

Queen’s University – founded by Queen Victoria in 1845.  Take a stroll around the campus and admire its stunning architecture and magnificent quadrangle reminiscent of the great medieval universities.  Queen’s University Belfast

The Peace Walls – take a Black Cab tour or simply walk along the Falls and Shankill Roads to view the political murals which portray their own graphic story of Northern Ireland’s troubled history. Touring Around Belfast

Ulster Folk Museum – a short walk from the Transport Museum lies the wonderful folk museum where visitors can step back in time to watch artisans at work.  Visit the village church, shops, post office and farms which have been brought to the museum from other parts of Ireland and painstakingly rebuilt brick by brick.  Ulster Folk Museum

Stormont Estate – view the Parliament buildings which are home to the Northern Ireland assembly.  The estate is approached by a grand avenue of lime trees and is certainly worth a visit.  Stormont Estate

The Giant’s Causeway and Game of Thrones Tour – take a full day coach tour through the nine glens of Antrim along the coastal road.  Explore the natural phenomenon of the 40,000 hexagonal basalt columns and get to see several of the Game of Thrones filming locations including ‘The Dark Hedges’.

For a dose of retail therapy head to the opulent Victorian Queen’s Arcade and the nearby Victoria Square, Belfast’s premier shopping centre and home to numerous designer and luxury brands.  The award winning St. George’s Market on West Bridge Street is open at weekends with many stalls serving locals and tourists alike.  The red brick Victorian market building dates back to the 1890’s.  and offers everything’s from freshly caught fish to handicrafts and Irish whiskey.

The Dark Horse – a Belfast institution with an array of antique furnishings and historic artefacts adorning its walls.  Sit at a copper polished table and enjoy a delicious lunch whilst soaking up the atmosphere.  Before leaving, don’t forget to take a look in its rear courtyard where you will find some incredible wall murals and pub memorabilia. The Dark Horse

Shed Bistro – featuring an open kitchen, it’s casual dining at its best in a relaxed atmosphere.  A great little neighbourhood restaurant and a worthy winner of ‘Bistro of the Year’ in both Belfast and Northern Ireland categories 2019. Shed Bistro

The Barking Dog – located along the leafy Malone Road in the Queen’s Quarter.  Enjoy lunch or a candlelit dinner in this fine dining restaurant.  Their signature fish pie is to die for!  The Barking Dog

Drawing Office Two – located in the historic Titanic Hotel and the former headquarters of the Harland & Wolff Shipbuilders.  Enjoy lunch in the same room where many of the world’s most famous liners were designed.  Convivial atmosphere and beautifully presented dishes. Drawing Office Two 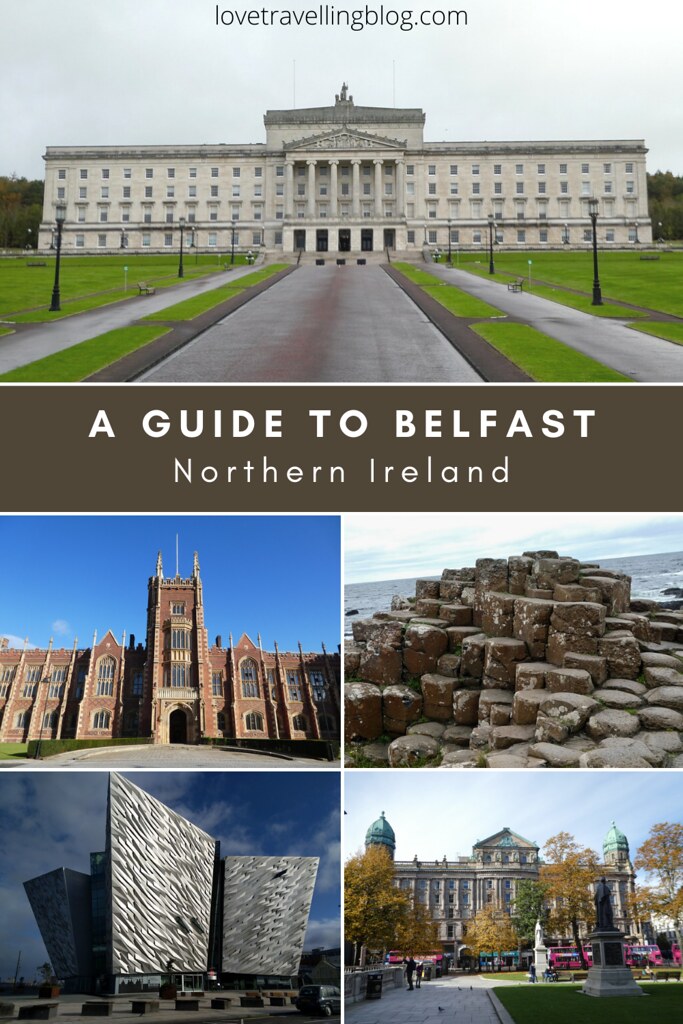 59 thoughts on “Belfast – Top things to see and do”