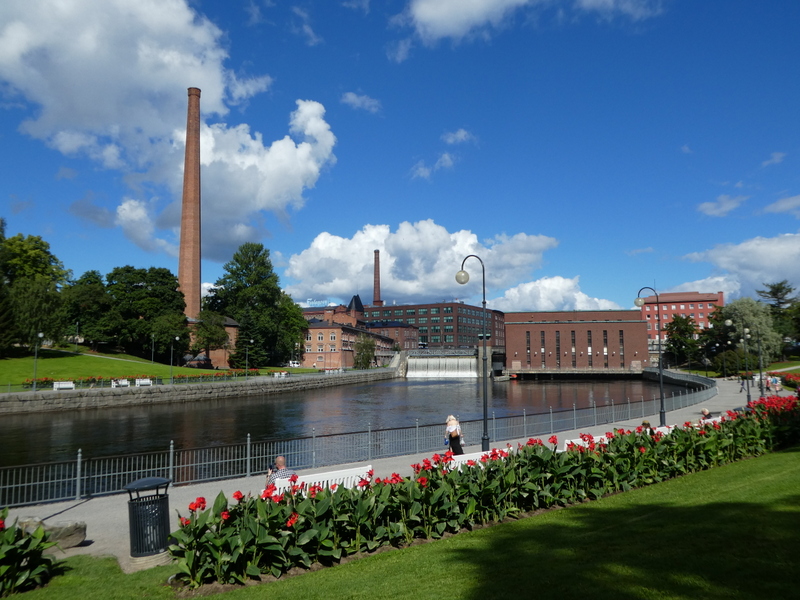 My travels in Finland took me to Tampere, located 100 miles north east of the capital Helsinki.  It’s Finland’s third largest city and takes just 90 minutes to reach by inter-city train from the capital.  I’d wanted to visit Tampere for sometime because it’s often referred to as the ‘Manchester of Finland’ due to its industrial past as the former centre of the Finnish cotton trade.  Manchester in north western England is a city I know well, it’s not far from where I was born and it’s a place I visit frequently so I was curious to visit Tampere and explore its industrial heritage.

Standing proudly in the centre of the town, on the banks of the Tammerkoski river, is the former Finlayson cotton mill, the birthplace of industrial Finland.  The mill was established in 1820 by a Scottish engineer called James Finlayson.  He produced woven wool but soon realised that as the Baltic climate was cool and damp, that the conditions would be ideal for cotton spinning as the thread would not snap.  So, in 1829 Finlayson transformed the building into a cotton mill with the company still existing today as a noted Finnish textile manufacturer producing high quality linens, towels and bedding.

Since production ceased in the mill in the 1970’s and industrial use of the buildings ended in the 1990’s the mill has been redeveloped as a monument to Finnish industrial history.  The mill now has protected status and is a cultural centre housing museums, restaurants, bars, a cinema and an art gallery.

It’s a similar story over in the village of Styal near Manchester at Quarry Bank Mill which was constructed in 1790 and became the largest cotton spinning mill in the U.K.  Powered by water from the River Bollin, the mill became a complete industrial community with its workers cottages, two chapels, a school, shop, farm and public house.  Gradually, the mill’s fortunes declined due to increased foreign competition and in 1939 Quarry Bank and the Styal Estate were donated to the National Trust as one of the best preserved textile mills of the industrial revolution making it possible to relive the past and experience daily life at the looms.

Back to Finland, it wasn’t just James Finlayson who thought that it was a good idea to set up a business in Tampere as it is now the second largest economic region in Finland with more than 30,000 companies flourishing in the greater Tampere district.

This doesn’t surprise me as Tampere’s half million inhabitants live on nature’s doorstep, the city being nestled between two scenic lakes.  There are no lengthy commutes or traffic jams to endure, the air is unpolluted, and one can safely cycle into the office on designated pathways, passing lakes and forests on the way.  I can’t think of a more stress free start to a working day, can you?

I will actually be returning to Tampere in early February as a guest of Talent Tampere.  A few weeks ago I was surprised but thrilled to learn that I had won an international blog writing competition and my prize is a visit to explore the international, business and travel sides of the Tampere region.  I’m already excited about my trip especially as it will be my first visit to Finland in mid-winter.  Sitting at home, sipping coffee from my Moomin mug and nibbling biscuits from its matching jar, its hard to believe that I will soon be taking a tour of the enchanting Moomin Museum which is located in the centre of Tampere.  I’m really looking forward to sharing my experiences in a couple of months time – I do hope you will enjoy them too!

My journey to Tampere

The Rochdale Canal in Central Manchester

94 thoughts on “The Cotton Mills of Tampere and Manchester”