We decided to spend the day in the attractive market town of Newbury which lies in the heart of West Berkshire.  The town is approximately 30 minutes drive from Oxford and around an hour by train from London.  We left the car in the Newbury Goldwell car park beside the leisure centre on Northcroft Lane which offers unlimited free parking on Sundays (£1 for four hours the rest of the week) and is an ideal starting point for a gentle stroll along the canal.

Before starting the Speen Moors Walk, we strolled through the vibrant town centre to the tree lined market square with its numerous historic buildings including the Corn Exchange which is now used as an arts venue and theatre.  The market has a long history and is believed to have been held here since Anglo-Saxon times.

Nowadays markets take place each Thursday and Saturday and as we were visiting at the weekend we were able to enjoy a wander around the stalls selling fresh produce, honey, cheese and much more.

The pedestrianised high street has a wide range of shops from the stylish Camp Hobson department store to Griffins Family Butchers who have been in the town for more than 25 years and ever popular as whenever I pass by there is always a queue snaking outside.

We’d now reached the bridge over the Kennet & Avon canal and the start of the Speen Moors Walk.  The canal passes through the town centre on its 87 mile journey from Reading to the Bristol Channel in the west.  This 3 km looped walk is fully accessible and a pleasant waterside stroll through the surrounding countryside.

After crossing the bridge along Northbrook Street, the towpath can be joined by going through a narrow passageway between Holland & Barrett and Coté Brasserie.  The path then passes under an archway to one side of the Lock, Stock & Barrel pub which sits in an idyllic position overlooking the canal and lock.

Just as we were approaching Newbury Lock The Jubilee, a traditional narrow boat operated by Kennet & Avon Canal Trust was entering the lock gates.  75 minute pleasure trips take place on Thursdays, Saturdays and Sundays at 12.00 noon and 2.30 p.m. between April until October.

The Kennet & Avon Canal Trust was formed in the 1960’s helping to reverse the decline in the canal after it had fallen into disrepair in the 1950’s when it was no longer possible for a boat to pass between Reading and Newbury.  The canal re-opened for pleasure traffic in the 1990’s.

Continuing along the towpath a short distance from Newbury Lock stands the West Mills swing bridge where the towpath crosses to the other side.  We had timed our arrival to perfection as the bridge was just re-opening after a boat had passed through.

Lining both sides of the bank are some pretty cottages with the old water mill having been converted into stylish apartments.  The gravel towpath is reasonably well maintained but after heavy rain puddles tend to form in places rendering the path muddy.

The majority of the moorings along this stretch of the canal are long term and it was interesting to take a look at some of the colourful boats as we wandered along, some of which had plant pots filled with brightly coloured geraniums on their roofs and others with washing drying outside on the canal bank.

Soon the wooden footbridge that we had used after parking the car came into view. This bridge opened in 2008 replacing a 1930’s arched steel lattice footbridge known as the Monkey Bridge.  The old bridge was inaccessible for wheelchairs, prams and bicycles and had come to the end of its useful life so its modern replacement took its name.  Both bridges, old and new linked the West Fields and Northcroft areas of Newbury via an area of low lying ground between the canal and the River Kennet known as Monkey Marsh which probably accounts for its title.

Houses on this section of the canal have generously sized lengthy gardens bordering the towpath and affixed to the fence of one of them was a sign that took my interest as it was labelled CommuniTEA.  The owners of this pretty garden open it to the public for tea and cakes several times a year with proceeds going to local charities.  Sadly, it wasn’t open as we passed otherwise we would have enjoyed stopping by.

Just beyond here, the canal widens where the River Kennet joins the canal north of West Fields and it is where the Jubilee boat turns around on its canal pleasure cruise.

On reaching the narrow humped back Enborne Bridge the towpath changes sides by Guyer’s Lock.  We paused on top of the bridge a few minutes whilst a canal boat approached, making its way into the lock.

A pill-box just north of the lock was one of a line of several hundred, all built in less than a year and occupied by Home Guard volunteers.  The pill-boxes now house bats and are listed structures reminding us of the horrors of the Second World War.

The path then leaves the canal with a signpost indicating the way along the Speen Moors Permissive Pathway, the property of the Sutton Estates.  The pathway winds its way along the banks of the River Kennet before branching off to the right.  This turn off is not signposted so I have included a photo below indicating which way to go.

Speen Moors is a wet valley grassland surrounded by ditches, watercourses and the River Kennet and a Site of Special Scientific Interest (SSSI) because of its important wetland wildlife habitat.

From there the pathway passes through a wooded area and then some open fields before meeting with the junction of the Lambourn Valley Way, a 20 mile long distance footpath from the Berkshire Downs at Uffington White Horse to Newbury.

The route then continues under the Lambourn Valley Railway bridge which carried the railway from 1898 until 1973.  The path then passes the water works which run parallel with Speen Lane and shortly afterwards Northcroft Park comes into view near to where we had left the car.

This looped walk combined with a stroll around the attractive town of Newbury created an enjoyable outing which I’d recommend for all ages.

Aldermaston to Woolhampton on the Kennet & Avon Canal 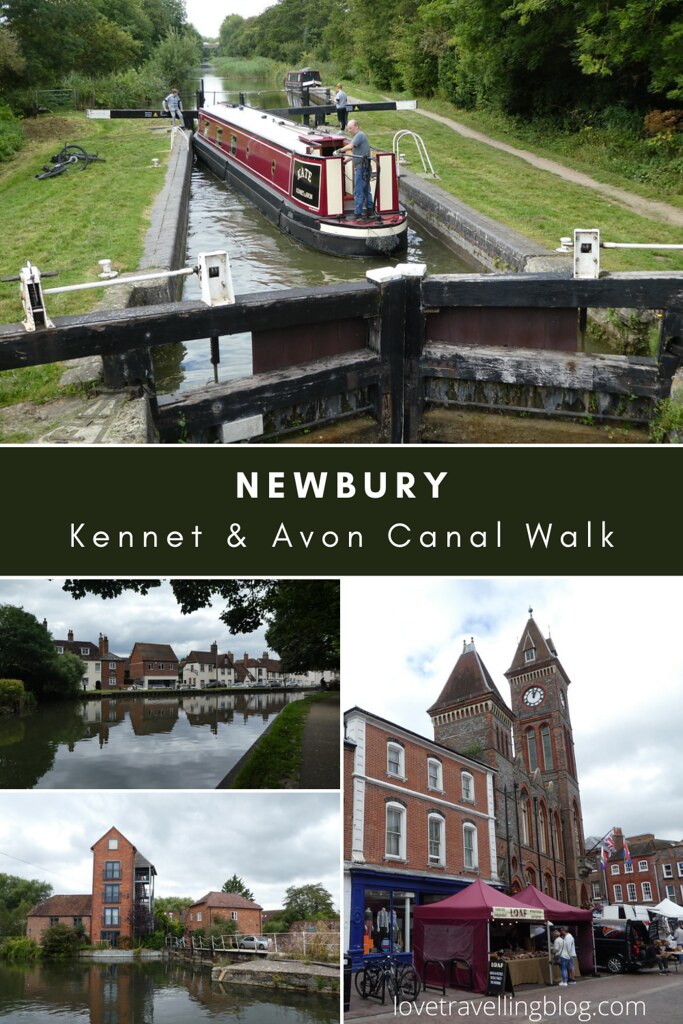