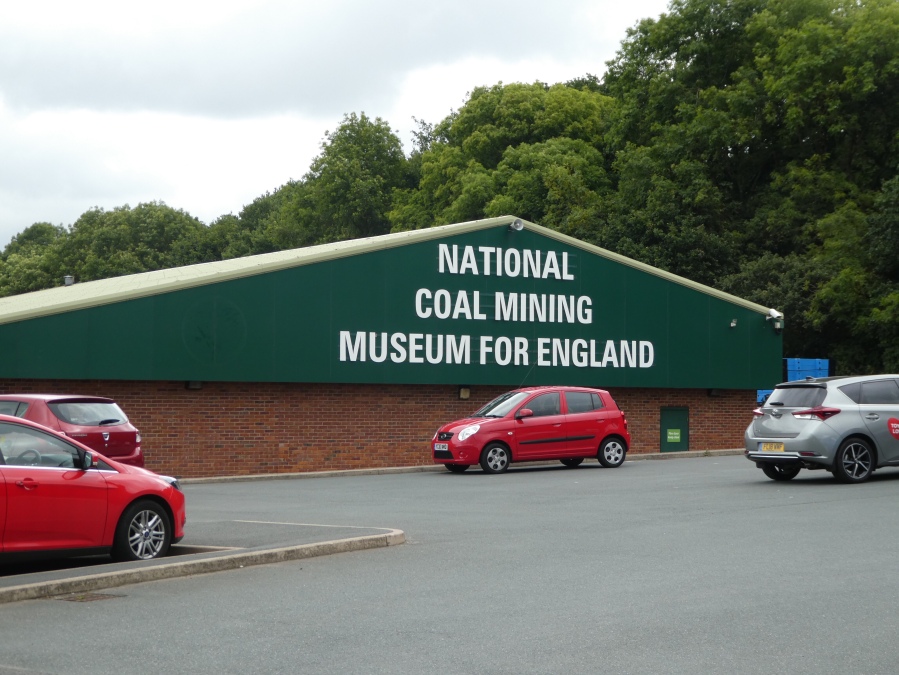 When researching my family history I discovered that I had numerous ancestors who had spent their working lives as coal miners so I thought it would be interesting to visit the National Coal Mining Museum for England and learn what it was like to work down a coal mine.  The museum opened in 1988 and celebrating its 30th anniversary last year.  At the time of the museum’s opening there were at least 60 mines still operating but since then they have all now closed.

The museum is located on the A642 in Overton near Wakefield, West Yorkshire and is signposted from the M1 motorway.  It was around 11.30 a.m. when we arrived and as the main car park was already full, we were directed to the overflow car park at the far end of the site.  Visitors can then either walk across to the main entrance taking only a few minutes or take a ride on the small train which runs at weekends and in school holidays, costing £2 for a day ticket.

The estate covers 45 acres and consists of two pits, Hope Pit, Caphouse Colliery and numerous other outbuildings which we planned to explore later.  Our first stop was at the ticket office inside the visitor centre where we booked onto the first available tour due to depart 40 minutes later.  Admission to the museum is free of charge but visitors are asked to pay a £5 deposit for which they are handed a traditional miner’s check resembling a large brass coin.  After the tour, visitors can either keep the check as a souvenir by donating £5 to assist with the museum’s running costs or request a refund.  Visitors arriving by car are also asked if they wish to pay an optional £5 parking fee but again this is voluntary.

We were advised to assemble at the entrance to the underground mine ten minutes before the start of the tour.  This gave us around 30 minutes to view some of the above ground exhibits and we decided to begin with a visit to the stables.  Pit ponies were commonly used underground in mines from the end of the 18th century until the mid 20th century.  This peaked in 1913 when there were 70,000 ponies working in coal mines.  The ponies typically worked an 8 hour daily shift during which they had to haul an average of 30 tons of coal in carts along the underground mine railway.  In later years mechanical hauling was introduced on the main underground roads and by 1984 there were only 55 pit ponies still in use, most of them at Ellington in Northumberland.  After Ellington closed two of the pit ponies were brought over to the mining museum where they enjoyed a well deserved, leisurely retirement.

Looking at our map of the colliery site, there was just enough time for us to visit the pit head baths which were built in 1938.  Before pit head baths were introduced miners had to travel to work, complete their shift down the mine and travel home either on foot or by bus still wearing the same damp and dirty clothes.  Their wives and mothers had to be ready with boiling tubs of water for washing the filthy clothes and to enable the miner to bathe in a tin bath in front of the fire or outside in the back yard

Pit head baths transformed the lives of miners and their families as miners were able to wash and get changed before returning home.  Viewing the locker room we discovered that each miner was allocated two lockers facing each other, one labelled ‘clean’ and the other ‘dirty’ for his two sets of clothes.  He would take a bar of soap and a towel with him to the dirty locker and leave them there before getting changed into his work clothes.  At the end of his shift he would remove his work clothes and place them in the dirty locker where they were able to dry as the lockers were designed to have warm air blowing through them.  He would then take a shower and return home clean and tidy.  There was also a small medical centre in one corner of the bathhouse where minor injuries would have been attended to.

It was then just a short walk to the entrance to the underground tour.  I was dismayed to find that I wouldn’t be allowed to take my camera down the mine with me.  In fact no items containing batteries could be taken underground including watches, phones and car keys.  We piled everything into my handbag and handed it over to the lamp room attendant for safe keeping after quickly taking a few shots of visitors in hard hats waiting for the tour to begin.

We were then kitted out with our hard hats and battery lamp packs weighing 2 kg ready to embark on our underground adventure.  There were 18 people on our tour which was led by a former miner who had worked at Kellingley which was the last mine to close in December 2015 bringing deep pit coal mining in England to an end.

Our tour began with a ride in the cage down to the pit bottom which took just over two minutes.  There was just enough room for us all, huddled close together as the lift started with a slight jolt and slowed down so much before arriving at the coal face we were beginning to think it wasn’t going to make it, but of course it did.  Turning on our lamps, we slowly made our way along narrow passageways where the floor was sometimes uneven and the ceiling so low we had to stoop.

Our guide took us along a chronological journey through the mining industry from the 1840’s when entire families including women and young children worked underground up to modern day mechanisation.  This helped us to understand how mining had changed over time, the conditions miners worked in and the tools and machinery they used as the industry developed.  Our group paused at regular intervals to learn about such things as the use of explosives to bring down the stone or coal, roof supports and how they have evolved over the years from wood, to props and bars and more recently to powered supports.  We inspected a haulage engine and saw how tubs of coal were brought to the surface using haulage engines following the days of pit ponies.

The tour lasted an hour and twenty minutes and was a fascinating insight into the history of coal mining.  The passageways were easily accessible with a minimum amount of stooping required and the only crawling sections were optional diversions. One member of our party was a retired miner in his late 80’s who carried a walking stick but he managed the full tour as there were benches strategically placed along the route enabling him to sit and take short rests.

The temperature underground is always a chilly 12 degrees so I suggest wearing a jumper or coat along with a pair of sensible shoes.  Returning above ground we handed in our hard hats and lamps before retrieving our belongings and heading off to explore the museum.

The museum documents the social history of mining families with exhibits displaying their homes, personal items and how they spent their leisure time.  One gallery focused on the importance of coal during the industrial revolution when it powered steam engines, furnaces and generated electricity.  Also on display was an actual coal merchant’s delivery lorry which used to be a common sight on our streets making regular household deliveries.  Coal fires were for many years the only method of heating people’s homes unlike nowadays when central heating is commonplace.

On our way back to the car, we paused to watch children having fun in the coal mining themed adventure playground.  The site also contains a large cafe, gift shop and a memorial garden commemorating mining fatalities.  Visiting the National Coal Mining Museum was very enjoyable and I suggest allowing a minimum of three hours to comfortably take the underground tour and also view the above ground exhibits.