After enjoying a day in Stirling the previous day, we turned our attention to Glasgow, Scotland’s largest city sitting on the banks of the River Clyde.  We bought off peak day returns at £13.70 each and the journey from Edinburgh Waverley Station to Glasgow Queen Street took just 1 hour and 20 minutes.

The station is located next to George Square, the city’s main square so this was an ideal starting point for our tour around the city.  Named after King George III, the square is surrounded by some beautiful buildings including the City Chambers and Merchants House.  This magnificent building is evidence of the wealth and industrial prosperity in the city at the time of its opening by Queen Victoria in 1888.

After admiring the square we set off for Glasgow Cathedral, a ten minute walk taking us along Cathedral Street and onto Castle Street.  This magnificent example of Gothic architecture was built between the 13th and 15th centuries and is the only medieval cathedral on the Scottish mainland to have survived the 1560 Reformation almost entirely intact.

The cathedral is free to visit (donations for its upkeep welcome) and wandering around its vast interior we could see evidence of many connections through the ages from the ancient trades on which the city flourished to the military and the law.  Not to be missed is a visit to the crypt to view the tomb of St. Mungo who brought the Christian faith to Scotland in the 16th century.

On leaving the cathedral, we spotted the first of several blue Tardis style police boxes around the city.  Although it’s been many years since they were a common sight on British streets they are still evident in Glasgow.  The purpose of the boxes was to improve communications within the police force and also to provide a facility for the general public to contact the emergency services.  This all seems like a dim and distant world now that we are all equipped with mobile phones.

Walking back towards the city centre we came across the St. Mungo mural on High Street.  Glasgow is famed for its street art and this piece by artist Smug on the gable end of a row of terraced houses is one of the most beautiful I have ever seen.  The picture depicts the patron saint of the city with a robin, illustrating the story of one of his miracles when as a child he brought a pet bird back to life.

Continuing slightly further and we had reached Glasgow Cross at the foot of the High Street.  Here we could see the historic Tollbooth Steeple, a seven storey clock tower which was once part of a much larger building containing the town hall, court and prison.  Standing 126 feet (38m) tall, the tower is topped by a clock and a stone crown.

We soon arrived at the Merchant City Quarter, one of the city’s oldest districts dating back to the 1750’s when it was home to the warehouses of wealthy traders and now full of bars, restaurants and galleries.  We’d come to visit the Glasgow Police Museum which is open daily and documents the history of Britain’s first police force.  Covering the period 1800-1975 it tells the story of the men and women who kept the streets of Glasgow safe.  There’s a fascinating collection of artefacts including medals, photos and uniforms brought to life with features on individual officers and the crimes they helped to solve.

In an adjoining room an international police exhibition contains more than 2,000 items of insignia, headgear and uniforms collected over the years.  This free museum run by enthusiastic volunteers who all served in the police force is a real hidden gem and I’d definitely recommend popping in.

Leaving the Police Museum it wasn’t far to Royal Exchange Square where we had planned a visit to the Gallery of Modern Art housed in a stunning neoclassical building built in 1778 as the townhouse of a wealthy Glasgow tobacco merchant.  Before becoming an art gallery the building had also served as the headquarters of the Royal Bank of Scotland.

The interior with its exquisite balconies features galleries over three floors focusing on work by both local and international artists.  It was pleasing to note that the artwork is supported by clear interpretations going beyond the name of the artist and title of the work to provide some context.  Unusual exhibits ranged from a scoop of chocolate ice cream to musical raindrops on a plant.

After completing our tour of the gallery we were ready for some lunch but didn’t need to look far as just two minutes away we came across the Counting House, the former Head Office of the Bank of Scotland with its historic centrepiece domed ceiling designed in Italian Renaissance style.

Feeling rested after our leisurely lunch we took the subway from Buchanan Street to Kelvinhall.  The Glasgow subway is the third oldest underground in the world taking 24 minutes to complete a circuit of it’s 6.5 mile (10.5K) route of 15 stations and is sometimes referred to as the Clockwork Orange.

Day tickets are £4.20 and returns £3,30.  We thought we would need a day ticket as we were planning to return from a different station but were pleasantly surprised to learn that this was acceptable with a cheaper standard return.

We’d come out to Kelvinhall so that we could visit the Riverside Museum at Pointhouse Quay.  The museum (entrance free) is dedicated to the city’s industrial heritage and was the winner of the 2013 European museum of the year.

I just adored everything about this amazing museum as it showcases transport memorabilia, steam trains, historic cars, trams and motorcycles.  Re-created streets take visitors to a bygone era with even an old subway station to explore.  Shops display goods from yesteryear, with a spit and sawdust pub and restored trams bringing the past back to life in a fascinating way.  A huge hall showcases trams, buses and trains and a large number of more recent exhibits that are gone but not forgotten such as a Hillman Imp motorcar similar to one driven by an elderly relative.

The Riverside Museum has yet another of Glasgow’s best free attractions just outside.  The Tall Ship Glenlee is one of only five remaining tall ships on the Clyde that are still afloat today.  This wonderful old ship allows visitors to experience what life would have been like sailing around the world in a 19th century fully restored three mast sailing ship.

We toured the upper deck and the vast areas down below.  During the course of her 47 years the ship was also used as a transport vessel and a military training ship.  It was unbelievable that touring the ship was free as it’s certainly an activity not to be missed whilst visiting Glasgow.

We still had one more museum we wished to visit which was about a 10 minute walk away.  On entering the Kelvingrove Art Gallery and Museum we were enthralled by its absolutely stunning interior of ornate arches and high vaulted ceilings.

The Central Hall is spectacular with chandeliers and carved shields adorning its arches and a huge walnut cased pipe organ taking central stage.

Moving into the main hall we viewed a fully restored Spitfire fighter plane, an icon of the Battle of Britain, suspended on wires giving the impression of what it would have looked like in the air.

Sadly, we didn’t have time to view all of the 22 galleries so we picked out some Dutch old masters, French impressionists and Glasgow’s own Charles Rennie Mackintosh Style Gallery featuring furniture, decorative panels and lighting from the city’s former Ingram Street tea rooms.

After visiting the gallery we strolled through the nearby campus of the University of Glasgow, one of Scotland’s four ancient universities.  The beautiful Gillmorehill campus has some grand old buildings and from its hilltop we were rewarded with some far reaching views of the city.

Not far from the university lies Glasgow’s Botanic Garden (entrance free).  The gardens are home to several glasshouses, the largest being Kibble Palace, a 19th century wrought iron framed glasshouse.  Unfortunately as we had arrived after 4.00 p.m. we were too late to look inside Kibble Palace. Thankfully though, the other glasshouses were still open so we had ample time to explore those which are home to plants from tropical rainforests.

The Kelvin river flows through the gardens and we enjoyed a leisurely stroll along the riverside and through woodland glades before making our way to Hillhead subway station for our return train back to Edinburgh from Queen Street station.

It had been such an interesting day exploring Glasgow and without rushing around we had managed to fit so much into our day.  The city is so attractive that I would like to return for a longer visit sometime in the future. 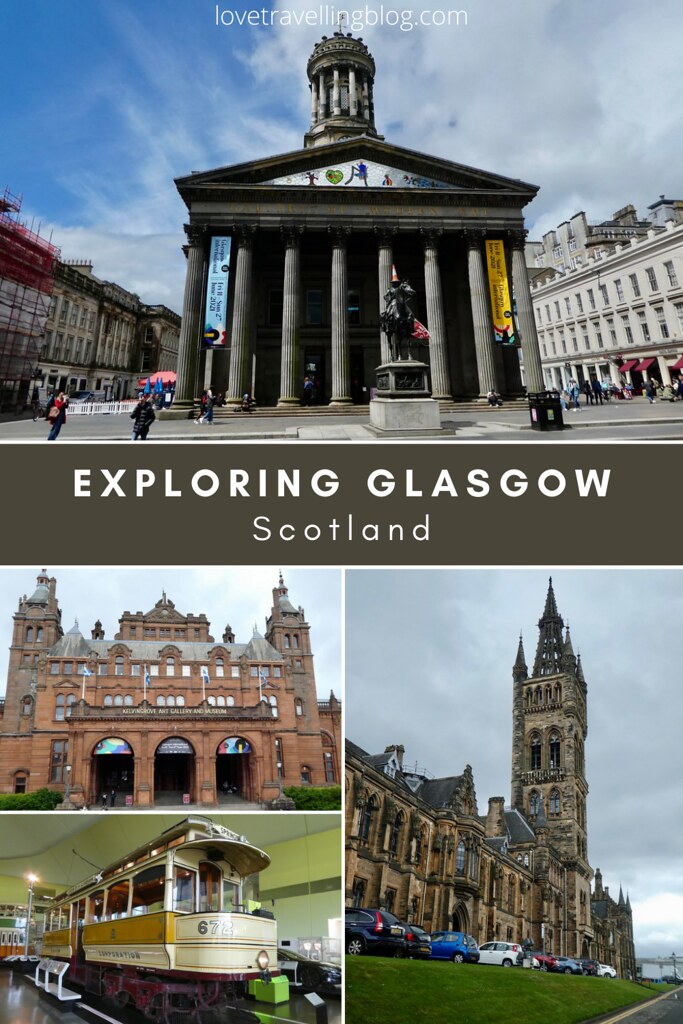