Norwich is the county town of Norfolk and lies approximately 100 miles (161 km) north east of London.  Getting to the city is easy with excellent road links, regular rail services and an airport five miles from the centre.  Trains leave London’s Liverpool Street Station every 30 minutes with a journey time of 1hr 50 minutes, with connections via Peterborough from the Midlands and the North.

This historic building, located in Gaol Street was constructed between 1407-1413 and served as the seat of city government from the early 15th century until the 1930’s.  At the time of the building’s construction and for much of its history, Norwich was one of the largest and wealthiest cities in England.  Nowadays the Guildhall is used as an events venue and cultural centre.

Originally Norwich’s market place and set on a 44 acre site, the cathedral is one of the finest Romanesque churches in Europe boasting the second tallest spire in England, after Salisbury.

Enter the cathedral through the largest monastic cloister in England and admire the stunning medieval high arches and roof bosses.  The interior of the cathedral is beautiful with its sumptuous decorations, elaborate carvings and stained glass windows.

Take a look at the unusual font and read about its history.  The confectionery company Rowntree Mackintosh was a major employer in Norwich and in 1969 Rowntree took over the Mackintosh factory which made toffee.  The factory eventually closed in 1994 and later gifted to the cathedral two of its burnished, copper bowls formerly used in the manufacture of toffee.  These bowls now form a shining, modern font with historic links to the city.  Norwich Cathedral

Museum of Norwich at the Bridewell

The museum focuses on the lives of the residents of Norwich from medieval times to the present day.  The galleries tell the story of how Norwich became a thriving merchant’s city, gaining its wealth producing textiles, chocolates, shoes and mustard.

Discover how the industrious citizens worked and spent their free time, view a recreated 1920’s chemist’s shop and a 200 year old jacquard loom.  Museum of Norwich at the Bridewell

One of the most elegant and opulent Edwardian office buildings in England.  It was constructed between 1900-1912 as the new headquarters for the Norwich Union Insurance Company who are now known as Aviva.

Surrey House is still in use as an office building for Aviva but visitors are welcome to look around its Marble Hall during office hours with free one hour guided tours of the building bookable in advance showcasing the company’s history.

The splendid yet functional Marble Hall office space was designed to incorporate Greek influences with the themes of insurance, protection and well-being.  The effect of this was to re-assure policy holders of the company’s strength and prosperity.

No expense was spared in using the finest marble and wood to furnish the entire building.  The Marble Hall is adorned with 15 types of Italian marble, originally destined for Westminster Cathedral.  The spectacular glass domed ceiling contains an innovative Edwardian air-conditioning system whilst the marble columns are reputedly the finest of their kind in the world.  Surrey House

The imposing St. John the Baptist Catholic Cathedral is a fine example of the great Victorian Gothic Revival.  Constructed in this style, it appears older than it actually is, as it was only completed in 1910.  Originally built as a parish church, it is believed to have been the largest in England and in 1976 became the cathedral of the new diocese of East Anglia.

Pre-arranged tours of the tower can be taken with guides leading small groups up the spiral staircase consisting of 280 steps to the top of the cathedral tower.  Pause mid-way for a breather on the crossing balcony and take in the stunning views of the transept and nave from a great height.

Pass through a small, ancient oak door out onto the roof and be rewarded with magnificent views of the historic city.  An excellent tour, more details of which can be found here.

Adjoining the Catholic Cathedral this heritage garden was created in a medieval chalk quarry between 1859 and 1895.  The garden comprises of almost three acres and features a gothic fountain, Italianate terrace and woodland walkways.  Plantation Garden

Perched high on Castle Meadow, Norwich Castle was built 900 years ago by the Normans as a Royal Palace with lavishly decorated interiors.  By the 14th century it had been transformed into the county gaol but after the prison’s relocation in the late 19th century the castle fell into disrepair.  It was eventually converted into a museum as we see it today.

Take a self-guided tour and explore the Norman Keep learning about medieval Norwich life in the castle.  There are further galleries on natural history, fine art, archaeology, costumes and textiles.  Norwich Castle

This historic, cobbled lane is the most complete medieval street in Norwich with many of its buildings dating back to the Tudor period.

The beautiful Dragon Hall used to be a medieval merchant’s trading hall.  Its Great Hall was built in the 15th century with some other parts of the building being even older.  It’s now the National Centre for Writing and supports the rapidly changing world of writing.  Dragon Hall

Another of Norwich’s historic buildings, this Tudor house has since the 14th century been home to several of the city’s merchants and mayors.  By 1890 Strangers’ Hall stood empty until a local solicitor saved it from demolition and ten years later opened it to the public as a folk museum.

The building looks quite small from the exterior but stepping inside it’s deceptively spacious.  The Great Hall was the heart of the medieval home with its huge oak table laid out with fine tableware, pewter and a feast for guests to enjoy.  Each room in the Hall is presented in the styles of its successive owners between the 14th and 19th centuries and demonstrates how the architecture of the building changed over time.

From the Great Hall, an oak door leads out into the garden with old fashioned varieties of rose bushes surrounded by traditional box hedges.  Stranger’s Hall

This circular walk around the city centre of Norwich follows the lovely riverside path along the River Wensum.  The walk starts near the forum in the centre of Norwich where parking is available.  You could also start at the railway station as the river is just a short distance away.  There is a path on both sides of the river for most of the way with the option of taking a short detour to visit the impressive cathedral.  There’s lots to see along the river with a series of bridges and historical buildings such as the New Mills Pumping House and the medieval watergate of Pulls Ferry.  You’ll also pass Cow Tower, a 14th century artillery tower with a fascinating history.

Designed by George Skipper and opened in 1899, it is one of the most beautiful covered streets in Norfolk.  At the time of construction, arcade shopping was immensely popular and it’s now home to many high-end retailers.

An outdoor market takes place on Gentleman’s Walk with over 200 stalls selling everything from fresh produce to household items.

A series of alleyways, courtyards and open spaces.  Wander along these car free lanes with their delightful array of small independent shops, cafes and galleries.

A weekend in Norwich 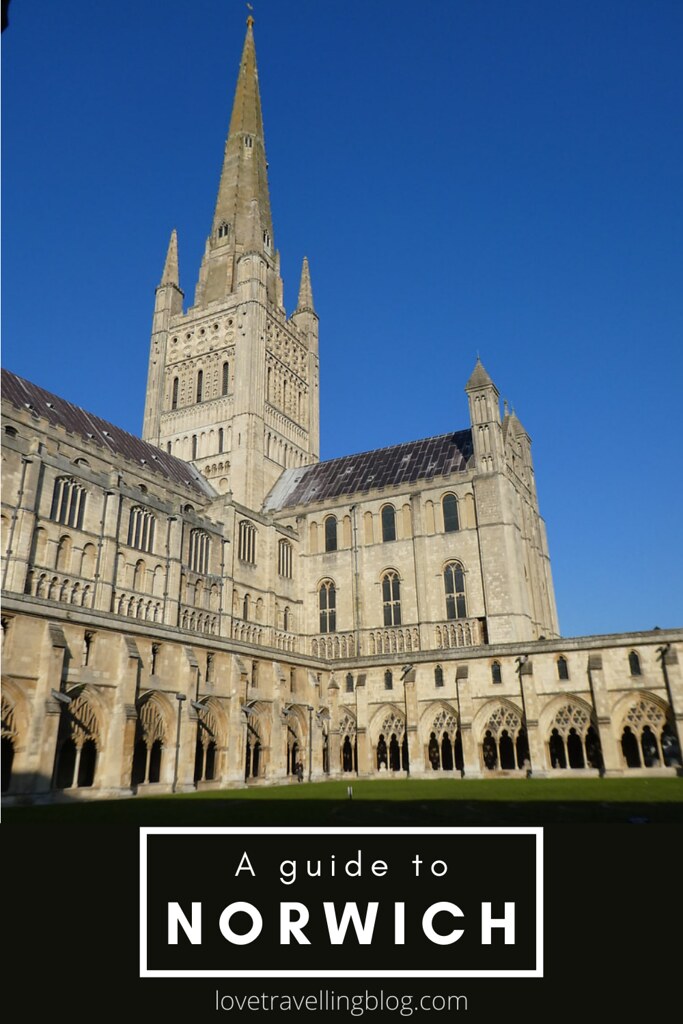 63 thoughts on “Norwich – A Travel Guide”