Hull is a port city in East Yorkshire, northern England, located on the north bank of the Humber estuary and was awarded the title of UK City of Culture in 2017.  Brightly coloured banners proclaim ‘Its never dull in Hull’ and there definitely are plenty of interesting things to see and do.

The M62 motorway, one of the main east–west routes in the north of England connects Hull to Leeds, Manchester, Liverpool and the M1 to London and with rail times of 2 hours 30 minutes from London its easily accessible for a short break.

One of the world’s most spectacular aquariums and home to 5,000 animals including seven species of sharks and rays.  This dramatic building was inspired by nature and appears to rise out of the water like a leaping fish complete with scales.  The aquarium opened in 2002 and operates as an educational and marine conservation charity.  Its landmark building is internationally recognisable and has even featured on a Royal Mail stamp.

Look in awe through the huge tanks of the Endless Ocean with two main viewing areas including a giant sized glass wall.  A guide gives live commentaries several times daily pointing out the various species of shark, rays and loggerhead turtles.  The fish happily swim around together and don’t eat the smaller fish because they are well fed and therefore not tempted into doing so.  Stroll through an ice tunnel on your way to visit the penguins.  The Gentoo penguins are one of The Deep’s star attractions and can be viewed from two different levels both above and below the water.  Details: The Deep

On the main concourse take a look at the statue of the famous poet Philip Larkin who lived in Hull for over 30 years and was chief librarian at the University of Hull.  Paragon Station was mentioned in one of his most famous pieces ‘The Whitsun Weddings’ which starts ‘I was late getting away’.  The statue portrays Larkin rushing for the train, with a manuscript tucked under his arm and clutching his trilby hat.  It was created by Martin Jennings who also designed the statue of Sir John Betjeman at St. Pancras Station.

The main marina is known as the Humber Dock Marina, originally the Humber Dock dating back to 1807.  The docks were closed for shipping in 1968 and re-opened in 1983 as a swish new marina with 270 moorings for pleasure boats.

The Spurn Lightship which was built in 1937 and served for almost 50 years as a navigational aid in the treacherous River Humber is now enjoying a leisurely retirement as a museum boat in the marina with tours available between April and September.

Located on Humber Street, in the Fruit Market district.  During the 19th century most of Hull’s fruit traders were based in this area and abandoned warehouses have now been transformed into Hull’s Cultural Quarter.  This vibrant area is now home to restaurants, bars, art galleries, a micro-brewery, gin distillery and a chocolatier.

A cluster of three museums all with free admittance, located around an attractive courtyard.

Located on a narrow cobbled street in the old town, the Streetlife Museum is divided into six sections with a Street Scene Gallery at its heart.  This recreated street is based on a busy, historic high street in the city centre and features old trams and a parade of shops.

Other galleries cover bicycles, horse drawn carriages and a re-constructed railway goods yard into which an original signal box has been transported brick by brick and reassembled.  Streetlife Museum

An archaeology museum with a majestic mammoth as its centrepiece.  Exhibits include an Iron Age village and a Roman bath house with some exquisite mosaics.  Hull & East Riding Museum

The birthplace of William Wilberforce, a famous campaigner against the slave trade.  Over two floors the museum tells the story of the transatlantic slave trade and its abolition.  The museum also contains journals, costumes and personal items belonging to William Wilberforce and the historic building with its grand staircase is a cultural gem.  Wilberforce House

Housed in the old Victoria Dock offices, this historic building was originally opened in 1871 as nautical offices and now highlights the seafaring heritage of the city.  Tour the galleries to view a full sized whale skeleton, discover the craft of whaling and inspect numerous artefacts from Hull’s fishing and merchant trades.  Hull Maritime Museum

Contains a significant collection of paintings and sculptures including works by some European old masters including Canaletto.  Its entrance lobby is known as the Centre Court and displays highlights from the Ferens collection.  Connecting the city with its maritime history one of the galleries contains a unique collection of maritime paintings.  Ferens Art Gallery

The magnificent Hull Minster is more than 700 years old but was only officially granted Minster status in 2017.  Prior to that it appeared in the Guinness Book of Records as England’s largest parish church.

The interior of the Minster is truly beautiful with its elaborate ceiling, stained glass windows and oak carved pews.  Its marble font, which is still in use today, was used to baptise William Wilberforce the former member of Parliament for Hull.  Outside the Minster in Trinity Square are some newly installed mirror pools creating a feeling of reflection.  Hull Minster

Look out for cream coloured telephone boxes which are unique to Hull as it is the only city in the U.K. to have kept an independent telephone provider.  The company was formerly known as Kingston Communications and now uses the abbreviated title (KCOM).

It’s easy to get to the Humber Bridge by taking a train to Hessle Station, a journey of only 8 minutes from where the vast bridge can be seen towering up above the station.  Its then a 20 minute walk along attractive country lanes to the Humber Bridge Country Park.  This 48 acre nature reserve of woodlands and open meadows has several short walking trails through the park.

The Humber Bridge first opened to traffic in 1981.  At that time it was the longest single span suspension bridge in the world at 1.38 miles (2.2km) in length.  It is now the 9th longest and spans the Humber estuary between Hessle in East Yorkshire and Barton-on-Humber in North Lincolnshire.  There is a charge of £1.50 for cars to cross the toll bridge but by using the bridge the road distance between Hull and Grimsby is reduced by 50 miles (80km).

The market has been transformed into a street food emporium with the modernised interior retaining many of its historical features.  It’s now a light and airy food court with ample seating for casual dining.  Fresh produce and a range of products are also on offer at one end of the market.  Trinity Market

The building was originally the city’s Assembly Rooms back in the 1800’s and became a theatre in 1939.  It closed for a £16m major refurbishment at the end of 2015 prior to the city gaining its U.K. City of Culture status.  Hull New Theatre

A Victorian glass roofed passageway now home to a variety of quirky independent retailers selling goods that one might not be able to track down on the high street.

A weekend in Hull 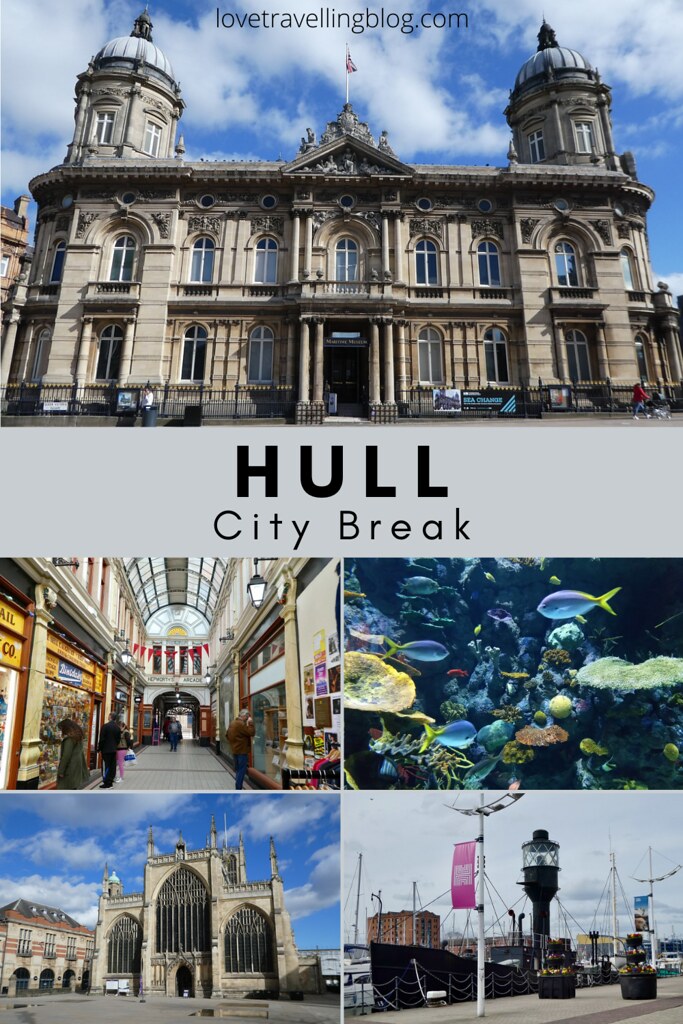