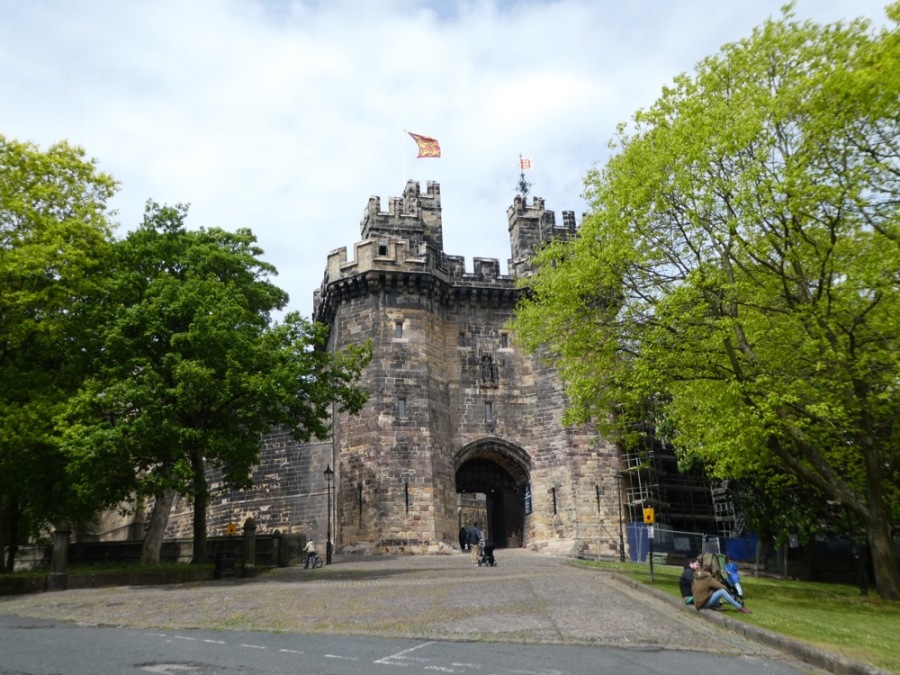 A weekend visit to the historic city of Lancaster located in the north west of England was our plan, approximately a two hour drive from our home.  I’d visited Lancaster before but not for many years and on entering the city, it was still congested through the one way system as we crept along until finding a turn off to a car park.

Before looking around the city we found a pleasant pub for a bar snack and a drink before climbing a hill to visit Lancaster Castle which overlooks the town and river Lune below.

The castle buildings are owned by the Duchy of Lancaster and part of the castle is leased to Lancashire county council who operate a crown court in part of the building.  Interestingly, up until 2011 a large section of the castle was leased out to Her Majesty’s Prison Service, with the H.MP. Lancaster Castle sign above the large entrance gates still in place.  Tours of the castle cost £8 and last 90 minutes, further details can be found here.

Leaving the castle, a little lower down the hill we came to the Judges’ Lodgings which is the oldest remaining town house in Lancaster, dating back to the 17th century.  The building was originally home to Thomas Covell, Keeper of Lancaster Castle and a notorious witch hunter.  It was then used by visiting judges when they attended the sessions at the Assizes Court but this ceased in 1975 when the building was converted into a museum.  Sadly, the museum closed in 2016 due to council cutbacks but there are plans for it to re-open in the near future.

Returning to the town centre we wandered along the narrow, pedestrianised streets, glancing in the quaint shop windows along the way and being drawn in to some of the more interesting stores.  Although quite small for a city, Lancaster has a prosperous feel and with its artisan food stalls in the market square it was buzzing with activity.

Dominating the market square in what was once the town hall is Lancaster City Museum.  The museum was founded in 1923 and features displays on the history of the city from Roman to current times.  Also located within the building is the Kings Own Royal Regiment Museum with artefacts covering Lancaster’s Regimental history.  Admission to both these museums is free of charge and we found each of them interesting to view.

Our walk continued along the River Lune which stretches 53 miles through Cumbria and Lancashire.  To celebrate the millennium the Lune millennium bridge was constructed, opening in 2001 and allowing pedestrian and cyclist access.  This cable stayed footbridge is unusual in that it forms a Y-shape, connecting the riverbank, a viaduct and the quay.  Our car was parked close to the river so we concluded our tour through the city here but decided to stop off at Lancaster University on our way home.

The University campus is situated three miles outside the city centre at Bailrigg and was established in 1964.  Occupying a 360 acre site in a parkland setting, campus buildings are located on a hilltop whilst the lower slopes are landscaped with sweeping lawns, the Lake Carter duck pond and playing fields.  In recent years the university has expanded with the building of new halls of residence and research facilities making it a pleasant environment for study.

After a busy day of sightseeing in Lancaster we made our way home with fond memories of our visit to this part of Lancashire.