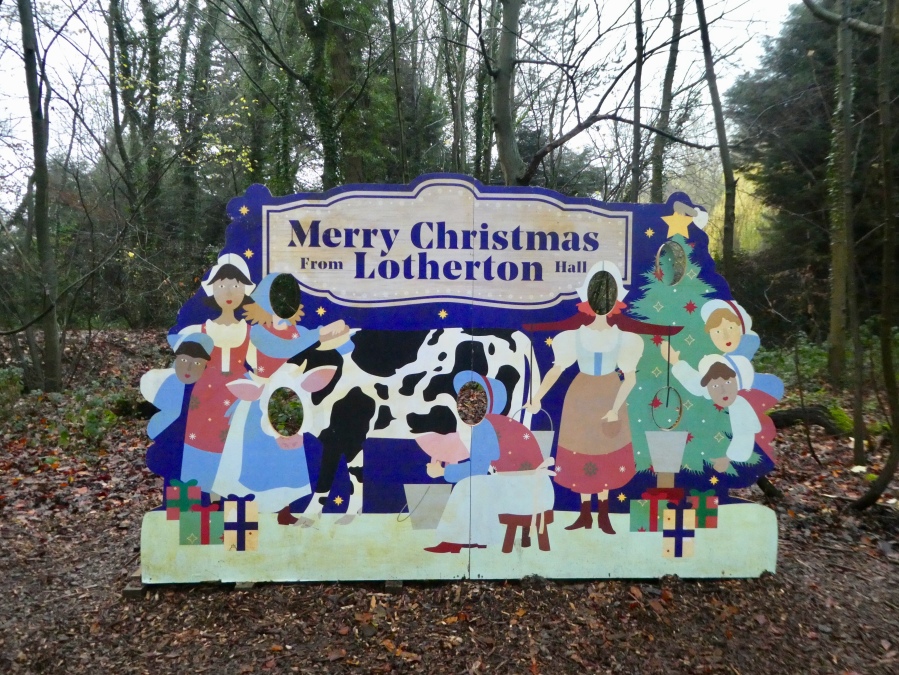 The weather may have been dull and dreary but what better way to get into the spirit of Christmas than to attend a festive event.  When an invitation dropped into my inbox to preview the Lotherton Hall Christmas Experience, I was excited to find out more.

The Lotherton Estate is situated in the north of England, midway between York and Leeds, one and a half miles from the village of Aberford.  The historic country residence, which was built in 1893, is one of eight museums and galleries maintained by Leeds City Council.  It was the former home of the Gascogne family who gifted it to the City of Leeds in 1968.

It was to be our first visit to Lotherton, which is surrounded by rural parkland and is approached via a grand driveway off Collier Lane.  As it was approaching 3.00 p.m. by the time we parked the car, we decided to view the outdoor attractions spread out over the estate first.

Located along well maintained but quite muddy woodland paths under twinkling fairy lights, is the estate’s magical 12 Days Walk.  To set the scene, the trail commenced with a giant sized partridge and some pears hanging from a large tree.  To the sounds of the festive song we explored eleven more interactive exhibits and games featured in the popular 12 Days of Christmas melody.

We said ‘bonjour” to the three French Hens inside a small wooden Parisian inspired cabin, strolled through the illuminated 5 Gold Rings and tried our luck on a 6 Geese a-Laying type of coconut shy.  This game was so much fun that I had to drag my family away as their competitive spirit was becoming addictive.  Tennis balls were attached to lengths of rope and the objective was to knock down the eggs, not as easy as it sounds.

Continuing, we couldn’t resist spinning some of the wooden ladies around to make them dance as part of the Nine Ladies Dancing exhibit and then watched the Ten Lords-a-Leaping illuminate in the woods, one at a time.

The trail concluded with a parade of 12 Drummers Drumming which visitors could operate from behind each figure by pulling some strings to play the drums.  Darkness was falling as we headed over to the Fairy Dell making the Christmas Experience even more enchanting.  Nestled in the rockery garden is a fairy village with its own little houses, shops, cinema and miniature helter-skelter.

Our walk then took us through the Elf Village where a cluster of wooden cabins surround a cosy seating area under twinkling fairy lights.  Inside some of the cabins children could have a go at several arts and crafts, such as making holly wreaths or painting festive plates.  Please note that an additional cost is payable for these activities.  Dotted around the village are also several food cabins and a shepherd’s hut selling warming mugs of hot chocolate and mince pies.

Feeling the winter chill, we headed over to The House where we sat in the porch and donned some blue plastic overshoes before stepping inside the elegant Edwardian property.  Exploring the house was an absolute delight as each of the rooms had been dressed for Christmas with trees, flowers and festive decorations.

To keep children amused, a magic show was about to take place in the drawing room and there were some period dressing up costumes in one of the other rooms which were also proving popular.

Back outside, the adjacent stable block was home to the Christmas Courtyard where more food options were available.  Last but not least, we arrived at the North Pole and despite not actually seeing the big man himself, we did manage to meet the elves who were very busy in Santa’s workshop.  We returned home that evening with a dose of pre-Christmas festive magic that inspired us to open a bottle of mulled wine and start decorating our own house, too!

The Lotherton Christmas Experience continues until 23rd December.  I would like to thank Lotherton Hall for inviting me, but as always, all views and opinions are entirely my own.

A Victorian Christmas at Harewood House

An Evening at the RHS Glow Winter Illuminations