Aldermaston is a small village in West Berkshire near to the Hampshire border, 46 miles (74km) from London and close to the towns of Basingstoke, Newbury and Reading.  It is best known as the home of AWE, which is located just a mile outside the village, and responsible for the UK’s nuclear deterrent.

We’d planned a walk along a stretch of the Kennet and Avon canal but before starting, decided to take a stroll around the pretty village one and a half miles from the wharf.  Aldermaston’s main thoroughfare is called ‘The Street’ and walking along there we came across numerous attractive 17th and 18th century worker’s cottages many of which are listed buildings.

Some of them had ‘missing’ windows most probably from when King William III created a window tax to assess the wealth and prestige of homeowners.  To save money, homes at that time were either built with fewer windows or some of the existing ones were bricked up.  The effects of this tax were often detrimental to health and well-being due to lack of sunlight and fresh air.

The village pub, The Hind’s Head is a former coaching inn with an unusual feature as around the back of the building is a single gaol cell with a domed roof.  It was last used in 1865 by someone who was drunk but has not been put into use since then.  The pub opens it up on National heritage days for all to see.

As with numerous other villages up and down the country it was so nice to find that Aldermaston has turned its traditional red telephone kiosk into a community library which was filled to the brim with an assortment of books for everyone to enjoy.

Having completed our tour of the village, we popped back in the car and continued on to Aldermaston Wharf which is located on the eastern end of the Kennet and Avon canal.  We began our walk from the car park located just behind the canal basin near to the visitor centre and tea rooms.  If arriving by train, Aldermaston station is just five minutes from the canal with good connections from Reading (journey time 13 minutes) or London Paddington (55 minutes).

Despite the visitor centre being closed we were still able to learn about the canal’s history from some useful information boards located along the towpath.  We discovered that Aldermaston was once a busy industrial wharf connecting to the ports of Bristol and London via the River Thames.  The coming of the railway signalled the end of the canal’s prosperity as it offered quicker journeys for both goods and people.  Canal trade then gradually decreased and by the early 1950’s the canal had fallen into disrepair.  Thankfully, the Kennet & Avon trust was formed in the 1960’s who reversed the decline and enabled the canal to re-open for pleasure traffic in the 1990’s.

From the wharf, narrowboats can be hired for a leisurely holiday exploring the canal and stopping off to visit interesting places such as Newbury and Hungerford. Several of these brightly coloured boats were being prepared for boaters as we passed by.  I’ve taken three canal boat holidays in northern France but surprisingly never been on one in the UK, but hopefully that will happen one day.

Leaving the canal basin, the towpath crosses a narrow electric lifting bridge carrying the busy A340 Basingstoke road over the canal.  Directly after the bridge we came to Aldermaston lock where two lock keepers were on duty at the lock gates but sadly no boats were passing through.

The towpath is reasonably well maintained but looks as if it could get quite muddy in places.  After passing numerous canal boats and cruisers moored on both sides of the bank just beyond the lock the footpath leads through shaded wooded areas, which were a lovely shade of bright green in the May sunshine.

Few people were about and it was a peaceful stroll with just the sounds of the occasional train as the canal runs parallel to the Great Western Railway line.  It was a pleasant walk along the towpath and the still water presented a mirror like reflection of the boats and trees which was lovely to view.  One of the information boards we passed informed us that the canal is a haven for wildlife but they must have all gone into hiding during our visit as we didn’t even spot a solitary duck.  The towpath switches sides a couple of times before reaching Woolhampton Lock.

Nearing Woolhampton bridge we spotted a pillbox constructed from brick.  The structure is one of many on the canal bank which were designed in 1940 to defend against German invasion.  Some of the pillboxes were disguised as sheds whilst others were secluded under trees.  Most of them now lay empty but one further along the canal at Reading has been turned into a ‘bat mansion’ as part of efforts to combat habitat loss.  The Canal and River Trust considered that its position near the water was the perfect place for bats to roost so perhaps others will be re-purposed in this way too.

Most of the village of Woolhampton lies across the swing bridge except for the Rowbarge Inn which has a gorgeous setting with its large garden leading down to the canal and is a delightful spot to sit outside with a drink when the weather is nice.  The historic pub is where ropes used to be made and dates back hundreds of years.

Before stopping for some lunch, we decided to explore the village centre which was only about five minutes walk away.  On our way, we passed the local railway station and I was intrigued to find out why it was called Midgham when it was clearly in Woolhampton.  My research revealed that the station was originally called Woolhampton when it opened in 1847 but in 1873 it was decided to rename it Midgham after another village two miles away.

The reason for the name change was that it was thought to be too confusing for passengers to have both a Woolhampton and a Wolverhampton on the rail network.  I found this amusing as the two places are like chalk and cheese with Woolhampton being a tiny picture postcard village with fewer than 1,000 residents whilst Wolverhampton is a sprawling city 120 miles to the north with a population of 250,000.  Another interesting fact about Midgham station is that it is Berkshire’s quietest with an average of only 100 passengers per day (pre COVID) whilst only ten miles away in Reading, the station averages 3.8 million passengers in a normal year.  We did in fact have to wait at the level crossing as the barriers were coming down as we approached but it was one of many fast trains that do not actually stop at Midgham.

After passing a row of pretty cottages and a house with a clock mounted above its door we arrived at the village centre which straddles the A4 between Newbury and Reading.

Arriving at the junction of Station Road and Bath Road we came across an ornate fountain which was presented to the village by one of the estate owners of that time to mark the Diamond Jubilee of Queen Victoria.

Strolling around Woolhampton was a delight as more than 25 of its small collection of buildings are listed for their historical or architectural interest.  The village also boasts some lovely small shops such as the Corner Shop housed in a row of pretty Tudor cottages and filled with lots of good quality gifts and items for the home.

Slightly further along we came to the Gill-Campbell Hall which is now privately owned but was given to the village by a Miss Blyth to be used as a religious meeting house and working men’s club.

After crossing the road we spotted the village store and what a gem it was.  Chatting to the owner, I learnt that this family run shop has been trading since 1936 selling locally sourced produce and speciality groceries all beautifully displayed on traditional wooden shelves.

There’s also a small café with seating out on the terrace and it’s the sort of shop that I wish was still around in more of our villages rather than the soulless mini-supermarkets that are increasingly taking over.

Nearby, The Angel also looked inviting, originally an old coaching inn, it was rebuilt in 1931 when the road needed to be widened.

On our way back to the canal we were just in time to watch the electric swing-bridge open as a narrowboat was waiting to get through.  It’s a difficult section for boaters because of the combination of cross currents, the swing bridge and then the lock in quick succession.

As we continued along the towpath, a boat was entering the lock and we stood and watched whilst the two lock-keepers operated the lock gates.  Unfortunately the boat wasn’t lined up properly in the lock but with the help of the lock-keepers it managed to pass through safely.

Afterwards, we spoke briefly to one of the lock-keepers who told us that the majority of the locks on the Kennet and Avon do not have assistance provided with lock-keepers only being stationed at the more complicated locks.

Wandering back to the Rowbarge Inn for a spot of lunch we reflected on our enjoyable canal walk including strolls around two pretty little West Berkshire villages. 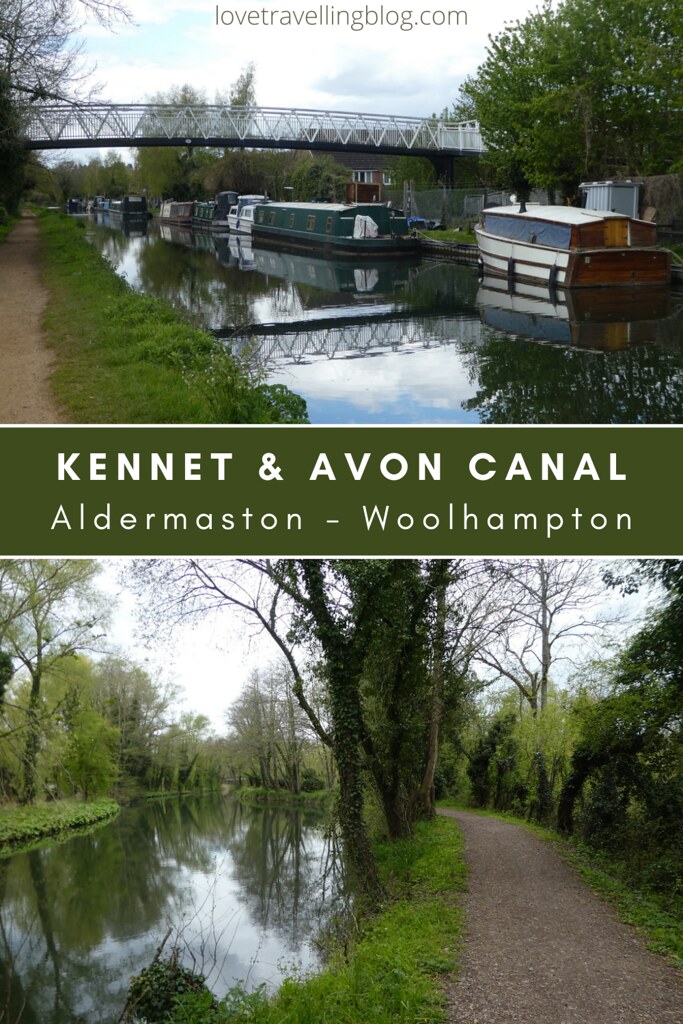 75 thoughts on “Aldermaston to Woolhampton on the Kennet & Avon Canal”