It might not be well known, but Birmingham has been referred to as the ‘Venice of the North’ as it boasts more miles of canals than Venice.  It sits at the heart of England’s canal network with around 35 miles (56 km) of waterways.

As Birmingham is located in the centre of the country it couldn’t be easier to reach.  Birmingham New Street station is one of the U.K’s largest travel hubs with regular rail services to all parts of the country.  The station also provides quick access to Birmingham International, the city’s own station stop for anyone looking to fly to or from the city.

St. Philip’s Cathedral – constructed in Baroque style in 1715 as the parish church of Birmingham, it became Birmingham’s cathedral in 1905.  It’s England’s third smallest cathedral which is somewhat surprising with Birmingham being England’s second city.  What the cathedral lacks in size it certainly makes up for in elegance with its beautiful stained glass windows and oak panelled galleries.  Birmingham Cathedral

The Library of Birmingham – opened in September 2013 at a cost of £188m it’s now the largest public library in the U.K.  It was designed by the Dutch architect Francine Houben and resembles a gift box.

The building features two outdoor terraces, the Discovery on the third floor is laid out with beds of fruit, vegetables and herbs to help promote healthy eating and encourage gardening.  Whilst on the seventh floor, The Secret Garden terrace has landscaped flowerbeds with wooden patio seating to enjoy the far reaching views over the city.

The Shakespeare Memorial Room on the top floor was designed for the first central library in 1882.  After being dismantled in 1974 when the original building was demolished it was put into storage until it was refitted into its present location.  The room has been restored to its former glory and contains Britain’s most important Shakespeare collection.

Birmingham Museum and Art Gallery – a Victorian baroque masterpiece completed in 1885.  The building was designed as a museum with the basement Water and Gas Halls being set aside for local people to come along and pay their utility bills.  These halls retain their original names and are now used to host temporary exhibitions.  The museum has free admittance and features numerous galleries on the history of Birmingham, taking visitors back in time from the city’s medieval beginnings to its more recent expansion.  Birmingham Museum and Art Gallery

The museum first opened in 1978 and since then more than 50 shops, cottages and other buildings from the surrounding Black Country have been moved there brick by brick.  The main focus of the museum covers the period 1850-1950 and is located on former industrial land where coal pits, disused lime kilns and an old railway goods yard used to be.

The main entrance is in the old Rolfe Street Baths which features displays of local artefacts that were made in the industrial heartland of the Black Country.  Heritage buses, trams and trolley buses take visitors on the short journey to the village centre.  It’s possible to ride on these vehicles as often as you wish as there is no extra charge for using the transport and it’s a fun way to get around.

Visit the Victorian school of St. James with its classroom of antiquated desks, slates, chalk and inkwells facing the teacher’s blackboard.  The village shops include a general store, a chemist and a gentleman’s outfitters.  Each shop had a member of staff dressed in character to answer questions and relate stories of local life in days gone by.

Along the canal, a typical dock basin has been re-created with several narrowboats on display on the nearby canal arm.  There’s also a 1880’s brick blacksmith’s forge and a lifting bridge between the ironworks and boat dock which has been moved to the museum from Tipton.  Black Country Living Museum

University of Birmingham – Local trains operated by London Midland run from Birmingham New Street at frequent intervals taking just a few minutes to the edge of the university campus.  The campus is attractively landscaped and is definitely worth a visit to explore the extensive grounds and view the historic buildings.  At its centre stands the Joseph Chamberlain Memorial Clock Tower, affectionately known as ‘Old Joe’.  Overlooking Chancellor’s Court, it is one of the tallest free standing clock towers in the world standing 110 metres tall.  Built in 1900 it was named after the university’s first chancellor.

Lapworth Museum of Geology – located on the campus.  The museum holds an extensive collection of fossils, minerals and rocks dating back to 1880 and is one of the oldest specialist geological museums in the U.K.  It re-opened in 2016 after a complete refurbishment and in addition to rocks and fossils contains zoological specimens with galleries providing insights into how the Earth formed and changed through time.  (Admission free).  Lapworth Museum of Geology

Birmingham Back to Backs – four terraced houses operated as a museum by the National Trust.  Pre-bookable tours last approximately 90 minutes and are limited to around 8 people as the rooms are very small.

These houses are preserved examples of similar homes built around shared courtyards, constructed for the rapidly expanding population of Britain’s industrial towns.  They were restored by the Birmingham Conservation Trust and opened to the public in 2004.  Each of the four homes is decorated and furnished as it would have been in a different era, the 1840’s, 1870’s, 1930’s and 1970’s.  Birmingham Back to Backs

BBC Birmingham – On Level 3 of The Mailbox.  Here you’ll find a visitor centre offering free admission.  The centre covers two floors and features interactive exhibitions showcasing content from the BBC.  On the upper floor visitors can glance through the windows of the BBC West Midlands studios, test their skills as a weather presenter using the autocue and have photos taken with a mock up of the Strictly Come Dancing judges.  BBC Birmingham Visitor Centre

The Bullring shopping mall is one of the busiest in Britain and consists of two main buildings, the East and West Malls, both bright and spacious and with more than 160 stores and kiosks offering a wide selection of goods and services to suit everyone’s needs.

Standing proudly outside the Bullring shopping centre is a six tonne bronze statue of a bull.  It was created by Laurence Broderick and is officially known as The Guardian but is simply called The Bull.  The sculpture measuring 2.2 metres was designed to be two and a half times the size of a real bull to produce more impact and was installed in 2003 resting on a hidden plinth below the paving.

The Great Western Arcade – an elegant Victorian shopping arcade built in 1876 over the Great Western Railway line.  The arcade has two entrances, one on Temple Row and the other on Colmore Row, the Temple Row end being very ornate.  It’s home to a selection of boutiques and small independent retailers and features a wonderful clock which strikes a set of five exposed bells on the quarter of each hour.

The Mailbox – an exclusive shopping mall on the site of the Royal Mail’s main Birmingham sorting office which at one time was the largest mechanised sorting office in the country.  A branch of the designer department store Harvey Nichols is to be found here alongside wine bars and restaurants with their terraces overlooking the Worcester and Birmingham Canal.

Brindley Place – take a walk along some of the city’s canal towpaths.  Starting from The Mailbox continue to Brindley Place, a canal side development named after the 18th century canal engineer James Brindley.  Formerly this area was the site of Birmingham’s industrial past but when British manufacturing declined in the 1970’s factories gradually closed down and the waterfront buildings became derelict.

It has now been transformed into a vibrant part of the city with pleasant landscaped walkways, squares and footbridges making it easy to access the many bars and restaurants that line each bank.  The area is also home to the National Sea Life Centre, Crescent Theatre and the International Convention Centre.

A weekend in Birmingham 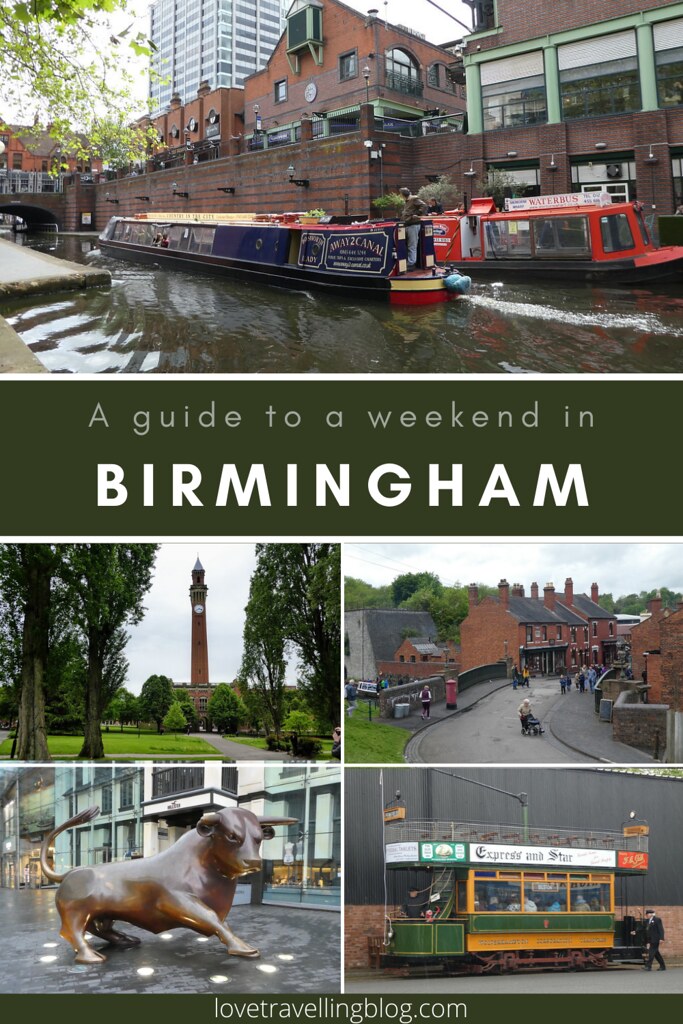 142 thoughts on “Birmingham – A travel guide”