Ross-on-Wye is an historic market town sitting on a rocky outcrop overlooking the Wye Valley, an Area of Outstanding Natural Beauty.  This scenic part of Herefordshire is only an hour’s drive from Birmingham and is easily accessible, being just off the M50 motorway.

The town centre, with its attractive Tudor buildings is centred around the 15th century Market House which has its origins dating back to the 12th century when King Stephen granted Ross-on-Wye the right to hold a market in the town.  Nowadays, twice weekly markets take place under its arches with local traders offering a selection of fresh produce and household goods.  The upper floor of the Market House is home to ‘Made in Ross’, a studio and shop where local artisans are able to display their arts and crafts.

The streets leading from the Market House offer a mix of high street names including several small independent shops, galleries, cafes and restaurants.  It’s a pleasant place for a stroll and a spot of shopping.

Making our way back up the hill once again we came across mock Gothic walls surrounding the Gazebo Tower which was built in 1833.  It is one of the finest follies in Herefordshire and was originally intended as a viewpoint.

Facing these walls is the Man of Ross pub which seemed popular with groups of people enjoying food and drink on its terrace.  This landmark pub is named after John Kyrle who is noted as being the ‘Man of Ross’ as he spent much of his time and wealth improving the welfare of Ross-on-Wye for its residents.  His portrait and an inscription describing his life can be found above the bar window outside the building.

Just behind the Market Hall we found another picture of him denoting his former home in the town which has since been divided into two small shops.

Leaving the pub, we continued along Wye Street which curves steeply down the hillside and is flanked with brightly painted houses, some of which are now attractive guest houses and B & Bs.

The path leads down to the Caroline Symonds gardens overlooking the River Wye.  Here we found an attractive wooden bandstand with a small statue of a lion fashioned out of ash next to it, marking the International Lion Clubs centenary.

Each Sunday afternoon during the summer months ‘Bands in the Park’ concerts take place and I’m certain locals and visitors alike will look forward to them resuming next year.

Our walk continued as far as Wilton bridge after which we crossed the road to return to the centre of town along the river bank.  Canoes were being unloaded for boat trips as we passed, as this scenic stretch of river is a popular centre with day and shorter trips being available to the beauty spot of Symonds Yat, 12 miles downstream.

Strolling through the riverside gardens our attention was drawn to two large bird sculptures and we discovered that in 1997 the renowned British sculptor Walenty Pytel was commissioned to produce three sculptures on the theme of nature and creatures found in the Wye Valley.  The sculpture near here depicts mallard ducks flying with their feet down and along the Rope Walk where we were heading next, the sculpture depicts swans flying in to land.  The third of Pytel’s sculptures is of leaping salmon which we had come across earlier outside the Man of Ross pub.

It’s a lovely walk along the riverside with its open parkland setting.  Strolling back towards the town centre there are some splendid views of the town which is dominated by the Gothic spire of the Parish Church of St. Mary the Virgin.

The riverside path leads onto the Rope Walk, an area that was once used to dry ropes as they were produced nearby in the early part of the 19th century.  The rope making process required a long area to lay out the rope, and that is where the path gets its name from.

Our walk brought us back out onto Wye Street not far from where we had left our car.  Ross-on-Wye is an interesting small town to visit and by combining a wander through the town with a stroll along the riverside there is ample to see and do. 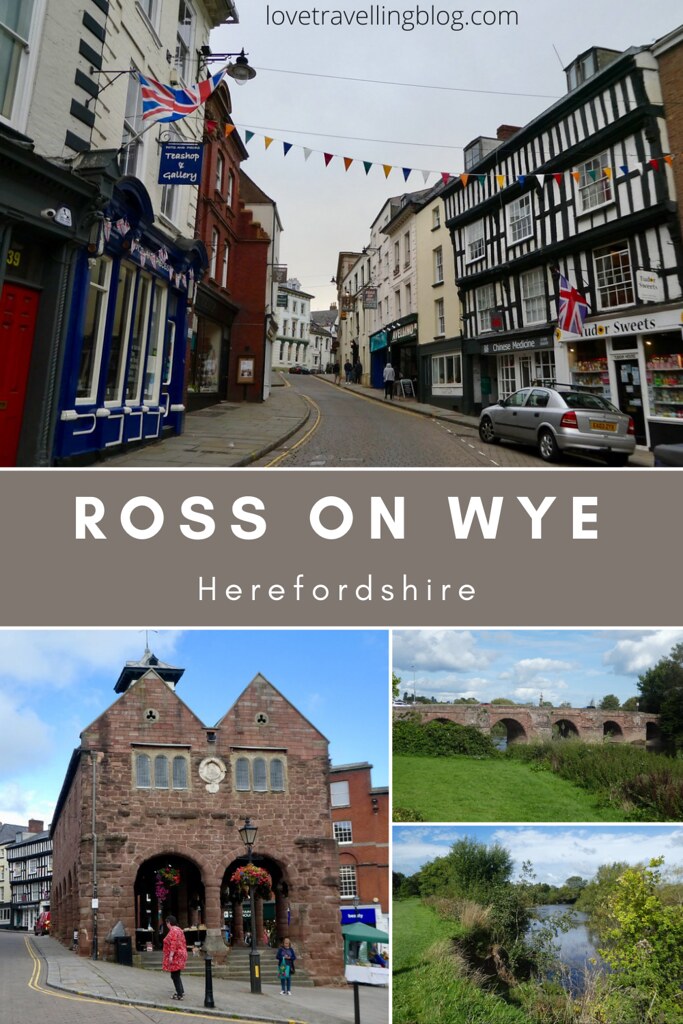