We decided to spend a day in the small market town of Stroud nestled in the south west Cotswolds, ten miles south of Gloucester.  The town had piqued our interest as it had recently been named by the Sunday Times as the best place to live in Britain so we were interested to find out why.

On the way there we stopped off at Gloucester Services on the M5 motorway between Junctions 11A and 12.  You might wonder why I am bothering to mention a service station but the one here is like no other as it does not have any of the usual fast food outlets or chain coffee shops.

The building has an angled grassed over roof to blend in with the landscape and specialises in artisanal food selling locally sourced produce.  Inside, the design is light and airy with sunlight streaming in through large glass windows.  There’s a very pleasant cafe overlooking a small lake with outdoor seating for when the weather is nice, a farm shop, butchers, cheese stall and a selection of high quality gifts all beautifully arranged.

It’s a perfect place to stop for a coffee and a cake if you’re passing by and ideal for a trip out to pick up some local delicacies if you live nearby.  Who would have thought a motorway station could be so appealing!

Returning to the car, it didn’t take us very long to reach Stroud where we found parking close to the railway station (free all day Sunday).  Although we had parked close to the canal we decided to explore the town centre first.  It seemed a pretty place with steep streets and some interesting architecture.

As it was a Sunday it was fairly quiet as not all the shops were open but we spotted several small local retailers such as the excellent Stroud Bookshop plus numerous inviting cafes and pubs.  The town is said to have an impressive local food scene with a weekly Saturday farmers market that’s very popular and brings the community together.  Tucked away off the high street are narrow alleyways where we discovered yet more little shops and pavement cafes.

At the top of George Street stands the Subscription Rooms, now a performing arts venue and home to the annual Stroud Theatre Festival.  A key moment in the building’s history was in 1962 when The Beatles performed there.

After looking around the town we headed out to Stratford Park which lies to the north but is easily reachable on foot.  The park was a private estate until 1935 with its 17th century wool merchant’s house now used as the town’s museum.  The park is noted for its large collection of trees many of them planted in 1890 when the estate was laid out.

We’d pre-arranged a timed entrance slot to the museum which offers free admission but discovered that most of it was not actually open for viewing.  A modern extension has been incorporated into the original building which contains an art gallery displaying temporary exhibitions.

More than 4,000 objects are usually on display documenting the history of the town and these include some of the first lawnmowers ever manufactured and a rare Baughan motorcycle.  To the rear is a very pretty landscaped garden which was looking beautiful with its roses in full bloom.

Leaving there, we made our way back towards the car and took a walk along the canal bank.  Stroud is linked to the River Severn by an eight mile canal that was completed in 1759.  In the 18th century two canals, the Stroudwater Navigation and the Thames and Severn Canal linked to the Rivers Severn and Thames enabling goods to be transported across the country as far as Bristol and London.

The waterway served the local woollen mills delivering coal to the mills to power their machinery and to carry cloth to the city markets.  The Cotswold Canal is now the collective term for these two separate but connected waterways.  Many of the old mills still line the canal but only two continue to produce cloth making the coating for Wimbledon’s tennis balls and baize, the green felt used for snooker tables.

New life has been breathed into these disused mills as several have now become creative hubs to writers, artists and craftspeople living in the town, similar to what happened in Hebden Bridge in West Yorkshire which is famed for its bohemian lifestyle.

We strolled along the towpath from Wallbridge Lock where we came across the Cotswolds Canal Trust visitor centre but sadly it was closed.  Next door though, the Upper Lock Cafe was open and was a picturesque spot to relax with a pot of tea in its small garden overlooking the canal.  A heritage lottery funded project is underway to restore the canal in stages so that it can be used again for leisure boats.

Back in the car we continued onto Coaley Peak, a local beauty spot four miles south west of Stroud.  On the way we had to stop a couple of times as cows were blocking the road but I’m unsure if this is a regular occurrence or if they had just escaped from their fields.

There’s a large free car park and several picnic benches at this scenic high point.  It was quite hazy but we still enjoyed some far reaching views over the Severn Valley, the Forest of Dean and across to the Brecon Beacons so I popped back to the car to pick up my camera to take the panoramic views.  The flat, grassy land around the Peak forms part of a nature reserve and is a popular stopping off point along the Cotswold Way Nature Trail long distance footpath.  This concluded our day out in Stroud which had been very enjoyable and a town we would happily return to sometime in the future. 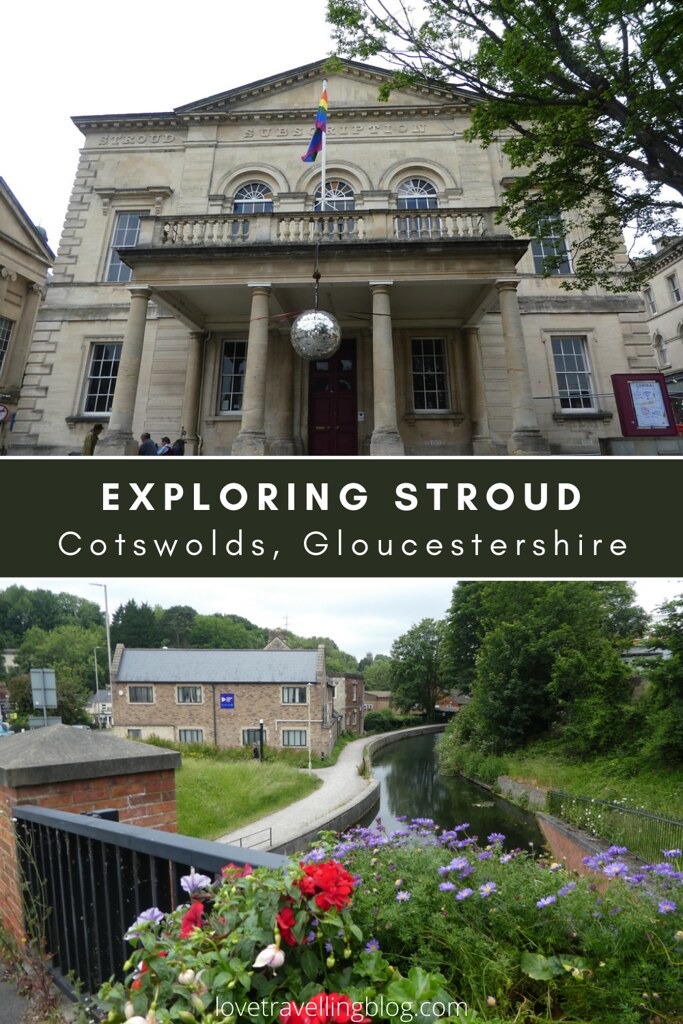 50 thoughts on “A day in Stroud, Gloucestershire”