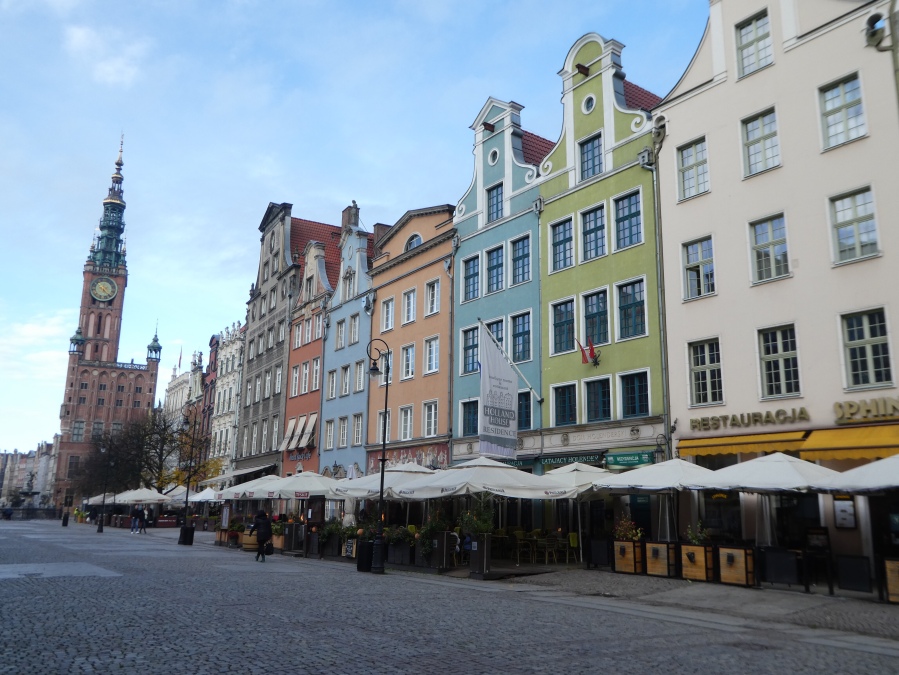 A few weeks ago we noticed that Ryanair was offering bargain priced flights to Gdansk, and as we’d enjoyed our previous visit to Krakow, the opportunity to visit a second Polish destination seemed irresistible.

Our flight departed Leeds-Bradford airport promptly at 9.30 a.m. taking just two hours over to Lech Walesa airport.  The airport is named after the former Polish president and its gleaming, spacious arrivals hall was only completed in September 2015.  Accessible to the terminal via a footbridge is the Gdansk Port Lotnczy railway station with services into the city’s main Gdansk Glowny station every hour.  A more frequent service operates to Gdansk Wrzeszcz from where passengers can change to Gdansk Glowny.  Tickets can either be bought from the  machine on the platform or on board the train.  We used the ticket machine which was easy to operate with single tickets costing only 3.80 zl (approximately 80p) for the 25 minute journey.

It was shortly after 1.00 p.m. when we arrived in the city centre so we decided to head straight to our hotel the Gdansk Novotel Centrum to leave our luggage.  We had selected the Novotel because of its position on Granary Island in the middle of the Motlawa river, yet only steps away from the historic old town.  It took us approximately 25 minutes to reach the hotel on foot and after quickly checking into our well equipped room with views overlooking the hotel’s large garden, we were ready for some lunch.

We soon found a cosy cafe near the Gdansk Ferris Wheel where we tucked into bowls of Polish sour soup, dark rye bread and glasses of the local Tyskie beer setting us back just 35 zl (£7.30) for the two of us.  We were unsure what the soup would taste like and hoped it wouldn’t taste sour, in fact it actually tasted delicious and we later discovered that it’s made from soured rye flour and meat and is a traditional recipe of both Poland and Belarus.

It was then time for some sightseeing, Gdansk is relatively compact with the majority of its attractions being accessible on foot.  The city was once a member of the Hanseatic League, an alliance of merchants in the late Middle Ages that developed trade routes across Northern Europe.  Despite much of the old town being destroyed after the devastation caused by World War II, it has been painstakingly rebuilt in its original style and is truly beautiful.  As we strolled along Long Bridge, an embankment on the edge of the old town lined with beautiful Hanseatic buildings and apartments, we paused to admire the photogenic views.  Passing through the Green Gate which links the river to the Long Market, we followed the Royal Way which was the route taken by the Polish kings during their visits to the city.

From the Green Gate, we continued along the absolutely beautiful Long Lane (Ulica Długa).  This broad avenue has been the city’s main thoroughfare since the Middle Ages, flanked at each end by its Green and Golden Gates.  This pedestrianised road is lined with delightful buildings reminiscent of the Netherlands with their Dutch inspired style of architecture.  All the way along are attractive cafes and restaurants with their outdoor wooden terraces still operating during the winter months, their guests keeping warm and cosy wrapped in the blankets provided whilst sitting near the outdoor patio heaters.

A short distance further along, in the centre of the Long Market, stands the Neptune Fountain, its statue dating back to 1549.  During the Second World War, the fountain was dismantled and hidden away for safe-keeping, surviving the ravages of war intact.  The fountain was finally returned to its rightful place in the 1950’s for everyone to enjoy and is a popular meeting place in the city.

To the side of the Neptune Fountain stands another beautiful Dutch inspired building, Artus Court, dating back to the 17th century.  This building was also rebuilt after WW2 damage and is now a branch of the Historical Museum.  Artus Court takes its name from the legendary King Arthur as it was his meeting place between knights and merchants in the Middle Ages.

After our early start to the day we were beginning to feel a little tired so we popped back to our hotel for a short rest before eating dinner in a wine bar called Chleb i Wino (translated meaning bread and wine) which was located on the island just a few minutes walk from the Novotel.  Both the food and service were impressive and my main course of pork in a chanterelle sauce was so good that I was already thinking of returning later in the week to try one of their other dishes.

A winter weekend in Krakow

Satisfying my wanderlust @destinations_shows taking place at Event City in Manchester until Sunday. So much to inspire me plus cooking demos, photo workshops and talks. Why not come along this weekend for a great day out and some travel ideas #destinationsshow #eventcity #manchester #travel #wanderlust #lovetravelling #travelshow #loveribblevalley
Wandering through Moscow's Red Square is like stepping into a fairytale. You might like to read about my visit in my latest blog post
Wish they were more heritage signs such as this one around our railway stations. I always need to pause and admire the Scottish terriers #scottiesofinstagram #scottiedog #scottishterrier #edinburghwaverley #vintagesigns
Wishing everyone a Happy New Year #happynewyear #2020 #newyearseve #newyear #lovetravelling
Festive greetings from Edinburgh. Read about our pre-Christmas visit in my newly published blog post #edinburgh #edinburghchristmasmarket #Scotland #visitedinburgh #lovetravelling #lovetravellingblog
Wishing everyone a very Happy Christmas #Christmas #skating #IceSkates
Reflections in the puddles seemed to make this Christmas tree even more beautiful #christmastree #Edinburgh #reflection
Doing some last minute present buying in Manchester but can't resist another wander around the Christmas market stalls #manchester #manchesterchristmasmarkets #christmasshopping