The Harrison Chambers of Distinction is a newly opened hotel and formerly a Victorian merchants’ residence dating from 1879.  Owner Melanie Harrison has expertly woven past and present into a celebration of all that is great about Belfast.  Carpets are from Ulster Carpets, the company who fitted out the ill fated Titanic, Victorian railings came from the Ebrington Barracks dating back to 1840 and reclaimed mahogany floorboards are from the nearby Royal Victoria Hospital.

The hotel is located in the affluent Queen’s Quarter of the city along the leafy Malone Road, close to the prestigious Queen’s University.  To reach the centre it’s a pleasant 20 minute stroll and with the option of the frequent 8B bus service, with a stop virtually outside the door, it’s possible to get there in a matter of minutes.

We arrived into George Best Belfast City Airport, just a 15 minute taxi ride to the hotel.  Guests also have the alternative of taking a train from Sydenham Station adjacent to the airport to Botanic, and then its an easy 10 minute walk to the hotel.  The Harrison looked very inviting as we approached, with the twinkling lights from its huge chandeliers casting a golden glow to welcome us.  The reception area is located at the end of the hallway and sets the scene for a stay in a heritage hotel with its antique mahogany leather topped desk.  We were warmly welcomed and after quickly checking-in, soon being shown up to our rooms.

Each of the 17 rooms has been individually styled and pays homage to a famous writer, artist or character with local links, past and present including Seamus Heaney, Jonathan Swift and Van Morrison.  Instead of having room numbers, each has a name, mine being that of CS Lewis.  It was actually more of a suite than a room as it came complete with an additional single room, dressing room and en-suite bathroom.

Settling in, I felt like an aristocrat living in a Victorian residence as the room was filled with antiques and CS Lewis themed artefacts.  The original fireplace took pride of place adorned with a brass clock on its mantelpiece facing the extremely comfortable king size bed.

An old fashioned Remington manual typewriter was positioned on a desk in the huge bay window, and sitting there I enjoyed watching life through the panes of glass just like CS Lewis, the Belfast born author of the Chronicles of Narnia might have done.  The antique typewriter might have had a qwerty keyboard but otherwise bore no resemblance to today’s electronic devices.  I think it would have taken me several weeks to write an article on it and although it fitted the style of the room perfectly, I’m pleased that I live in the digital world.

I loved the hospitality tray with its china teapot, cups and saucers and the fact that it also contained a small cafetière and jar of fresh coffee, suiting the style of the room much more than a Nespresso maker.  There isn’t a fridge, but as jugs of fresh milk are available on request from reception, I didn’t find that to be an inconvenience.

The dressing room boasts a large oak wardrobe and on opening its door to hang my clothes, to my surprise I found some fur coats.  I peered through the back of them but sadly they didn’t lead me to Narnia as in the Lion, The Witch and The Wardrobe but it was great fun and worry not, there was ample room for me to hang my own clothes too!

My en-suite came equipped with a powerful rain shower, delicately fragranced Vegan toiletries from Field Day Scents and a generous supply of the finest Egyptian towels.  Several rooms have free standing baths and Melanie kindly showed us around some of them.  I would have been happy staying in any of the rooms as they are all unique with their own style and character.

A bonus of The Harrison is that it has its own private car park accessed from the rear of the hotel.  The entrance has step free access and with the majority of rooms being accessible by lift, the hotel is suitable for those with mobility problems or with prams and pushchairs.  Fast and reliable Wi-Fi is available throughout the building with ample USB points and power sockets in rooms for charging devices.

A delicious continental breakfast is available daily and this can either be served in the rooms or taken in the attractive breakfast room/ cafe.  We started the day in style with a selection of fruit, freshly baked croissants, muesli, yoghurt and came to life with cups of Belfast’s premier White Star roasted coffee – what could be nicer!

For total relaxation, holistic therapies are available, either in guest’s rooms or in the hotel’s beauty treatment / relaxation room.

Start your tour of the city by heading a few steps down the road to the Ulster Museum to learn about the nation’s history, then wander across the road to the Botanic Gardens centred around the exquisite Victorian Palm House.  Whilst there, don’t miss the Tropical Ravine consisting of a plant filled glen of ferns, flowering vines, bananas, orchids and cinnamon.

Leaving there, take a stroll around the campus of Queen’s University, founded by Queen Victoria in 1845.  Its stunning architecture and magnificent quadrangle is reminiscent of the great medieval universities.

From there, it’s only a ten minute walk to Donegall Square in the city centre, dominated by the majestic Belfast City Hall.  Located in its grounds is the Titanic Memorial Garden, a quiet area of reflection and a monument to all those who lost their lives on RMS Titanic in April 1912.

It’s then time for a spot of shopping in the opulent Victorian Queen’s Arcade and the nearby Victoria Square, which is Belfast’s premier shopping centre and home to numerous designer and luxury brands.

I suggest then moving on to the vibrant Cathedral Quarter and stepping inside St. Anne’s Cathedral to view its exquisite baptistry and to look up through a glass platform to view the Spire of Hope.

Spend the afternoon at Belfast’s premier attraction, Titanic Belfast.  Its nine galleries tell the story of the historic shipyard from boomtown Belfast at the time of the ship’s construction at the beginning of the 20th century to Titanic’s fateful maiden journey.  Visitors even get to ride on an indoor cable car taking in the sights, sounds and smells of the Belfast shipyard.

Crumlin Road Gaol Experience where you can take a tour of the historic gaol which functioned between 1845 and 1996.  View the gruesome Hanging Cell where a total of 17 executions took place, the last of which was in 1961.

Ulster Folk & Transport Museums located a short train ride away in Cultra.  Here you can view the largest railway collection in Ireland plus many historic trams, buses and cars.

A short walk from the Transport Museum lies the wonderful folk museum where visitors can step back in time to watch artisans at work.  Visit the village church, shops, post office and farms which have been brought to the museum from other parts of Ireland and painstakingly rebuilt brick by brick.  Try to allow at least two hours to look around as there are so many interesting things to see.

The Peace Walls – take a Black Cab tour or simply walk along the Falls and Shankill Roads to view the political murals which portray their own graphic story of Northern Ireland’s troubled history.

Stormont Estate – view the Parliament buildings which are home to the Northern Ireland assembly.  The estate is approached by a grand avenue of lime trees and is certainly worth a visit.

The Giant’s Causeway and Game of Thrones Tour – take a full day coach tour through the nine glens of Antrim along the coastal road.  Explore the natural phenomenon of the 40,000 hexagonal basalt columns and get to see several of the Game of Thrones filming locations including The Dark Hedges.

The Crown Liquor Saloon is the only pub to be owned by the National Trust and a marvellous example of the Victorian era.  Dine in an individual snug with its own private door and a bell to ring for service.

The Dark Horse a Belfast institution with its antique furnishings and historic artefacts adorning its walls.  Sit at a copper polished table and enjoy a delicious lunch whilst soaking up the atmosphere.  Before leaving, don’t forget to take a look in its rear courtyard where you will find some incredible wall murals and pub memorabilia.

The Shed Bistro featuring an open kitchen the Shed is casual dining at its best in a relaxed atmosphere.  It’s a great little neighbourhood restaurant and a worthy winner of bistro of the year in both Belfast and Northern Ireland categories 2019.

The Barking Dog located just a few doors from The Harrison Hotel along Malone Road in the Queen’s Quarter.  Enjoy lunch or a candlelit dinner in this fine dining restaurant.  Their signature fish pie is to die for!

Drawing Office Two in the historic Titanic Hotel which was the former headquarters of the Harland & Wolff Shipbuilders.  Enjoy lunch in the same room where many of the world’s most famous liners were designed.  Convivial atmosphere and beautifully presented dishes.

Our stay at The Harrison Chambers of Distinction had exceeded expectations with its luxury heritage rooms with their huge bay windows dressed with sumptuous velvet curtains, antique furniture and free-standing roll top baths.  The owner, Melanie Harrison has superbly combined her collection of antiques and historic artefacts with the first class facilities demanded of today’s discerning travellers.

I liked the way each room had been designed around a local personality leaving us with a lasting feeling of what it must have been like to live their aristocratic life be it lazing on a chaise longue or writing at an antique desk.  This Bohemian bolthole is far removed from the standard hotel but the eclectic accommodation that’s been created is a definite winner.

For further inspiration on spending time in Belfast you may also be interested in the following:

We were guests of The Harrison and as always all views and opinions are entirely my own. 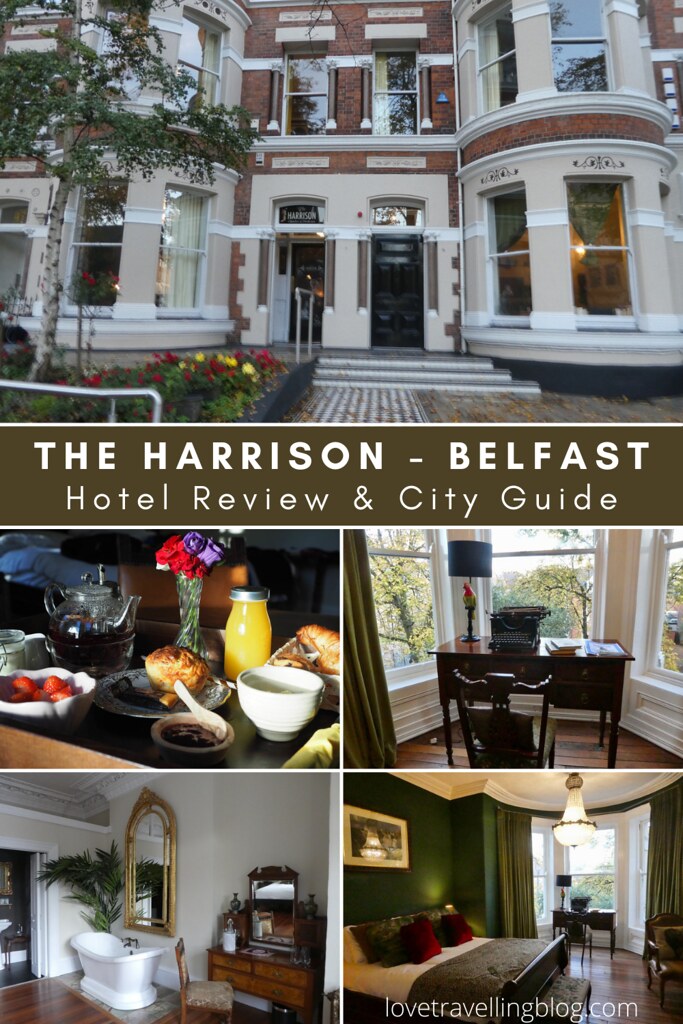 26 thoughts on “The Harrison Chambers of Distinction, Belfast”