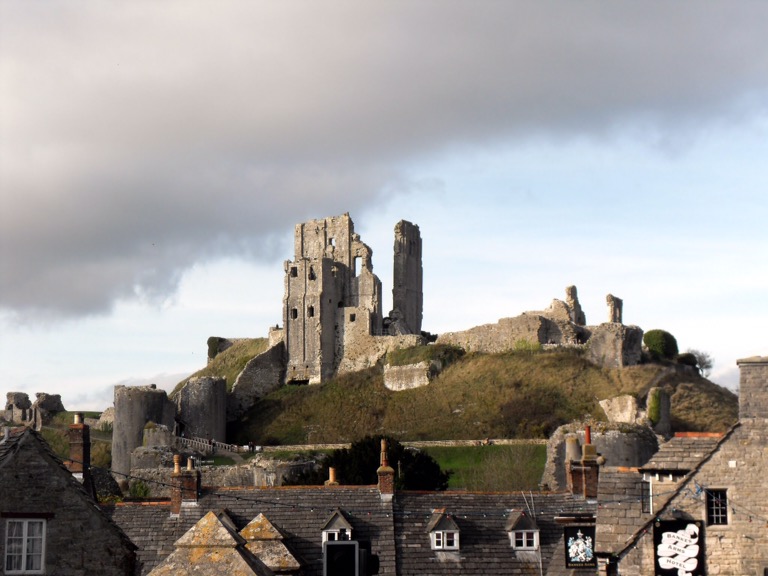 Corfe Castle is a small village on the Isle of Purbeck located midway between Wareham to the north and Swanage to the south in the picturesque county of Dorset.  Wandering around the village with its charming buildings constructed from the local Purbeck stone we soon arrived in the village square.  Here we found a cluster of small buildings comprising a post office,  village store, church, a couple of pubs and a National Trust shop where we always find a good range of gifts and handicrafts to tempt us.

Moving on, we strolled up the steep path to the castle which bears the same name as the village below.  Built by William the Conqueror, the castle dates back to the Norman Conquest of England in 1066.  The castle was named  ‘Corfe’  which means a cutting or gap as it was actually built in a gap of chalk hills created by two streams eroding the rock on either side.  Unusually for castles built in the 11th century, Corfe was partially constructed from stone, indicating that it was of high status.

Entering the castle ruins through a stone archway we found ourselves in the Outer Bailey.  Here,  a tented Tudor village had been erected where staff dressed in medieval costumes were demonstrating ancient crafts.   We watched a lady baking a chicken pie, the meat cooking in a clay pot hanging over an open fire then we moved on to the nearby stand where a man was demonstrating Tudor beer making techniques.

Children were having fun trying on metal helmets, playing historic games and having their photos taken in the wooden stocks which used to be seen in market squares. A trebuchet took our attention, this medieval siege engine would have been made to hurl rocks, dead animals or bees’ nests at the enemy. It was a huge machine and could be dismantled and carried around the country to the next battle.

It was then time to explore more of the castle ruins and take in some of the breathtaking views looking down to the village below and across the Purbeck hills.  We couldn’t have timed it better as just as we were leaning over one of the viewpoint balconies a steam train from the Swanage Steam Railway heritage line puffed its way past along the valley. During the summer steam trains run regularly between Swanage and Corfe Castle, we haven’t taken a ride on one yet but it’s definitely on our ‘to do’ list!

We scrambled over rocky paths and marvelled at how large parts of these ruins had been standing for so long.  Following paths, we ventured into the Keep and peeped through the narrow gaps in the stone.  Being exposed on the hill top it was very breezy but still quite warm when we returned to the car, stopping for a few minutes to read the display boards in the Visitor Centre.

It was our first visit to Corfe Castle and we found it to be very enjoyable so if you find yourselves in Dorset it would be an interesting day out.  To find out more you can take a look at the National Trust website here.

Autumn is really putting on a show for us here in Helsinki. With blue skies all day we enjoyed a lovely long walk around the Old Town Rapids and nature trail in the Arabia district. #myhelsinki #ruskea #helsinki #arabiafinland #autumn #fall #finland #finland_photolovers #Finlandnature
We've just been to an excellent photographic exhibition in this pretty dusky pink building. It's Villa Hakasalmi in Helsinki. Autumn is starting to put on its colourful display here too! #myhelsinki #visithelsinki #helsinki #autumn #ruska #Museums #finland
Enjoyed a really interesting walking tour around the Kallio district of Helsinki this morning with our lovely and informative tour guide Maddalena from @vinotourshelsinki ending with a tasty lunch in the cosy @harju8 Definitely to be recommended if visiting Helsinki! @myhelsinki #Helsinki #walkingtour #vinotours #vinotourshelsinki #VisitFinland #visithelsinki #lovetravelling #lunch
We absolutely loved our stay at the gorgeous @gibbon_bridge hotel in the scenic Ribble Valley. Nestled in beautiful gardens it was the perfect spot for a relaxing break. If you're looking for ideas as to where to go on an autumn break why not check out my review by following the link in my bio. #ribblevalley #ribblevalleywedding #visitlancashire #countryhotels #chipping #Lancashire #thisprettyengland #travelblogger #lovetravelling
I'm giddy with excitement as I pack for my first overseas trip this year. My cute little reindeers might provide a clue to where I'm heading! @visit_helsinki @ourfinland #Finland #Helsinki #TravelBlogger #lovetravelling #reindeer #presstrip #suitcase #suomi #yellow
Stunning views from Clitheroe Castle. I genuinely LOVE the Ribble Valley. Why not check out my latest series of blog posts to find out why! @visitribblevalley @visitclitheroe #clitheroe #clitheroecastle #ribblevalley #visitlancashire #lancashire #countryside
The late summer warm, sunny weather was what we had all been waiting for and simply perfect for a riverside pub lunch at the gorgeous Aspinall Arms in the Ribble Valley. You can find out more about our day out in my newly published blog post. Have a great weekend! @theaspinallarms @visitribblevalley #ribblevalley #lancashire @visitlancashire @brunningandprice #countrypubs #mitton
A touch of nostalgia, after 50 years Bobby's department store returns to Bournemouth Square today. Cosmetics, beauty salon, barbers, eateries and last but not least a food hall dedicated to dogs! The interior is fabulous and so are the views overlooking the square from its upper floor windows. Just what the town needed! Let's wish them every success! @bobbysbournemouth #bournemouth #bournemouthshopping #visitbournemouth #newstoreopening #newstore #lovetravelling #travelblogger