To complete our weekend break in Durham we decided to spend our final day in Newcastle.  Trains run frequently between the two cities taking just 15 minutes, with standard off-peak adult returns £7.90.

As it was a Sunday we were able to travel on any service so we arrived into Newcastle station bright and early ready for some breakfast.  Just outside the station is a monument to George Stephenson, the father of the railway.  Below the large bronze statue are four smaller ones representing his achievements as a miner, locomotive engineer, blacksmith and a bridge builder.

We headed down to the quayside, a vibrant area overlooking the River Tyne and home to numerous bars and restaurants.  On the way we passed the Newcastle Castle from where the city got its name.  It was a defensive fortification in medieval times and a rugged reminder of northern England’s turbulent history.

Arriving at the riverside it didn’t take us long to find a cosy pub where we set ourselves up for the day with full English breakfasts and cups of frothy cappuccino.  Feeling ready to start exploring, we strolled along the quayside which flanks both sides of the Tyne and is a ‘must see’ part of the city.  The quayside played a central part of Newcastle’s industrial history serving as a commercial dockside.   The area underwent a huge redevelopment in the early 2000’s and has become a hub of arts and culture in the north east.

A large quayside market takes place every Sunday and was just getting under way as we approached.  On offer were gifts, souvenirs and an array of tempting street food vendors.

Newcastle is a city of bridges, with seven of the region’s most famous, including the iconic Tyne bridge crossing the river.  The landmark Tyne Bridge is the most famous of Newcastle’s seven bridges.  When it opened in 1928 it was the biggest single span bridge in the U.K.  The bridge towers were built of Cornish granite and originally designed as warehouses but never used.  It is most recognisable for the annual Great North Run when 52,000 runners pass over the bridge accompanied by a display from the RAF Red Arrows aerobatic team.

We crossed over the river on the spectacular Millennium Bridge.  This is the world’s first and only tilting bridge linking Newcastle with Gateshead and is the River Tyne’s only foot and cycle bridge.  Opened in September 2001, the top of the arch stands 50 metres above the river when in its normal state.  The bridge is formed of a pair of steel arches spanning 100m between concrete stands rotated 40 degrees to permit boats to pass beneath four times daily.

Dominating the skyline on the south side of the Tyne is the Baltic Centre for Contemporary Art.  The building opened as a working flour mill by Rank Hovis in 1950, closing in 1982 after just 30 years in operation.  It was equipped with the most up-to-date machinery of the time and at its height employed around 300 people.  The Baltic served as a model for other Rank Hovis mills which were also named after seas or rivers, hence the name Baltic.

Times have changed and from an old flour mill it’s now a place where old meets new and has become the country’s largest dedicated contemporary art institution.  The Baltic is currently open Wednesday – Sunday 10.30 – 6.00 p.m. and although pre-arranged timed entry slots are recommended, walk-in visitors are usually welcome.  Admission free.

Not only is The Baltic famous for art, it’s also made a name for itself with kittiwakes!  More than 100 pairs of kittiwakes return each year to nest on a narrow ledge high up on the side of the building.  The gallery has become a major supporter of the Tyne kittiwakes and they can be viewed from the Level 4 viewing platform. The birds usually nest on sea cliffs or islands off the coast and are not usually so easy to see.

It seems strange that they have made this narrow ledge their home but it’s a perfect opportunity for visitors to view these beautiful birds up close.  An information board explained that this is the most inland breeding colony of kittiwakes in the world so it was very special to be able to observe them without the need for a pair of binoculars.  The birds spend autumn and winter out at sea and return to nest on the Baltic and Tyne Bridge ledges between March and August, so if you plan to visit Newcastle during the spring or summer do look out for this delightful sight.

Our walk continued along the Gateshead side of the river and embedded into the footpath between the Baltic and the Tyne Bridge are bronze plaques of over 30 of Newcastle & Gateshead’s most inspiring people from the past 60 years.  These local heroes who were nominated by the general public include celebrities from film, TV and sport, local authors, musicians and those who have contributed to the local community.  We spotted Alan Shearer, Ant & Dec and Brendan Foster.  Foster is a former long distance runner, commentator and the founder in 1981 of the Great North Run, which is now firmly established as one of the world’s biggest half marathons.

Overlooking the river stands The Sage, an international music centre.  This landmark building was designed by the renowned architect Sir Norman Foster and is a symbol of the city’s regeneration on the Gateshead side of the river.  The Sage is currently closed but it was worth the hike up to it as from there we were rewarded with excellent views of the full span of the Tyne Bridge where we were heading next.

We’d already walked across Brooklyn Bridge in New York, Tower Bridge in London and the Sydney Harbour Bridge in Australia so we were pleased to be adding Newcastle’s Tyne Bridge to our list.  The bridge was opened by King George V in 1928 and has since become a defining symbol of Tyneside.  There are footpaths on both carriageways and the views on both sides are spectacular.

Not only are the views good but the wildlife is too as we spotted more kittiwakes nesting on its narrow ledges, their nests built lying perilously close to the edge.

Back on the Newcastle quayside we made our way into the heart of the city along Grey Street.  This magnificent thoroughfare was completed in 1837 when the Prime Minster of the time Gladstone described it as the country’s best modern street.  The street is lined with grand buildings including the Theatre Royal constructed in neo-classical style and regarded as having one of the country’s finest theatre facades.

Grey’s Monument stands proudly at the top of the street commemorating Charles Earl Grey and the reforms he achieved.  The statue stands on a 134ft stone column with a viewing balcony at the top of the 164 steps.  Access is currently suspended but is normally open on the first Saturday of each month, entrance £5.

To the rear of the statue is the north east’s largest branch of Waterstones the bookseller,  housed in yet another beautiful building so we just had to pop inside  for a look around as I am always drawn to interesting bookshops and libraries.

Our walk then took us to the west of the city centre into Chinatown.  The Newcastle Chinatown is one of only five in England, the others being in London, Manchester, Birmingham and Liverpool.

The Newcastle Chinese arch was constructed in 2004 by Shanghai craftsmen and on either side of it are two guardian lions.  It is located on St. Andrews Street very close to St. James’ Park, the home of Newcastle United football club.

The heart of Chinatown lies around the corner on Stowell Street and this road looks particularly photogenic as it is adorned with 22 Chinese style lanterns instead of the usual street lights.

The remains of the old city walls can be seen nearby along with Durham Tower,  a semi-circular, single storey fortification which was built during the late 13th century.

After taking a look at the tower there was then just enough time for a meal before making our way back to the railway station for the short journey to Durham after  enjoying a fun-filled day exploring Newcastle.

A guide to visiting Hull 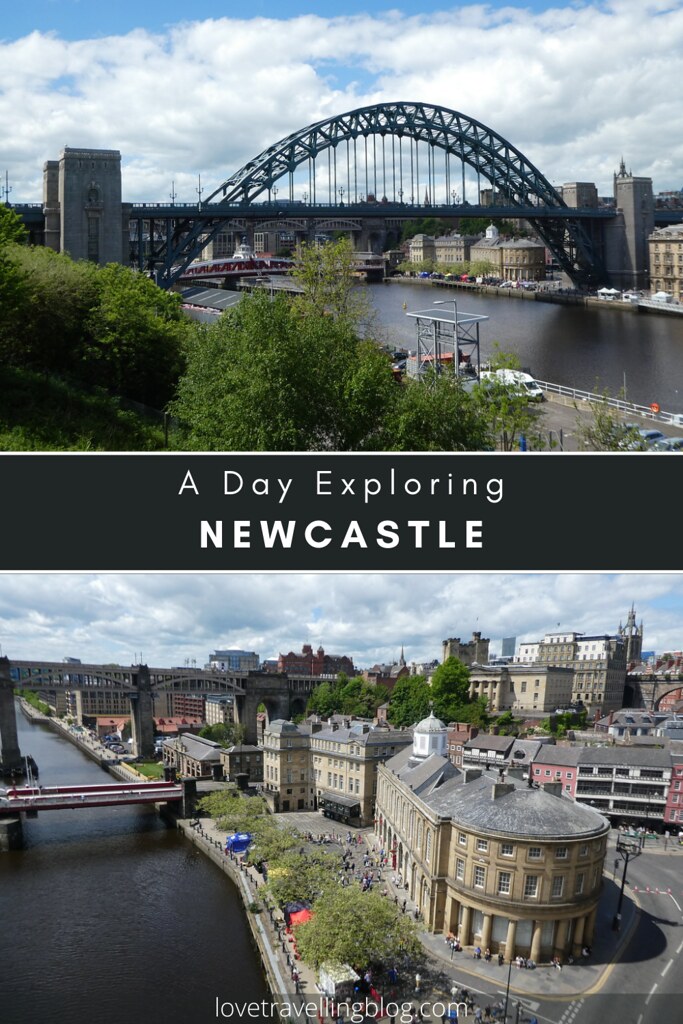