We decided to spend the day in Stirling and booked anytime day return tickets from Edinburgh Waverley at £16.90 per person.  Stirling lies 37 miles north west of Edinburgh and is often referred to as the gateway to the Scottish Highlands.  The journey time was only 45 minutes and it seemed no time at all that we were alighting the train and starting to explore another of Scotland’s fine cities that was once the capital of Scotland.

One of the first places we came across on leaving the station was the Stirling Arcade on Murray Place, a beautiful Victorian shopping centre with a great mix of retailers and an inviting cafe for our morning coffees.

Considering it was mid-summer, it was a gloomy day but at least it wasn’t raining as we made our way up the steep cobblestone main street towards the castle.  Stirling Castle stands on a craggy, volcanic rock and was the favoured residence of Scotland’s kings and queens.

When Edward I invaded Scotland from England he discovered that the castle had been abandoned.  Stirling Castle was then occupied by the English until the Scots regained it at the Battle of Stirling Bridge.  More recently, the castle has undergone a major upgrade to its furnishings and decoration but still retains it’s likely 16th century appearance.  The views from the castle walls afforded us with panoramic views out across the city and along the Forth Valley despite the lack of sunshine.  Sadly, it wasn’t possible to gain a view of the castle from its entrance and by the time we had returned back down to town it was obscured in mist.

The area just below the castle on the city’s highest hill is known as Top of the Town and here stands the Church of the Holy Rude.  The church is the second oldest building in Stirling and was founded in the 12th century.  It has similar associations with the monarchy to the adjacent castle, as a young Mary Queen of Scots worshipped there.  More significantly it is also where her infant son James VI was crowned King of Scots in 1567 in a ceremony performed by the Bishop of Orkney.

After visiting the church we then followed the path leading round to the fascinating valley cemetery to the north, which is separated from the church graveyard by a passageway.  The hillside cemetery contains some interesting headstones and statues and is well worth a wander.

Slightly further down the hill are two more interesting features.  The first, Argyll’s Lodging on Castle Wynd is thought to be Scotland’s most splendid and complete example of a 17th century townhouse, said to be fit to receive and impress royal guests with its grand rooms and exquisite artwork.

Sadly as with most of Stirling’s attractions it hadn’t yet re-opened at the time of our visit nor had the Old Town Jail which offers an insight into the history of local crime and punishment.  I’ve visited numerous former prisons both in the U.K. and as far afield as South Korea and each of them has offered a different but equally fascinating appreciation into life behind bars.

On our return back down the steep hill to the town centre we did manage to find that the Stirling Smith Art Gallery and Museum was open and offered free admission.  This stylish museum stands in two acres of grounds of ornamental flower beds and picnic tables.  The gallery contains portraits of Bonnie Prince Charlie and William Wallace, the latter being one of the main leaders during the First War of Scottish Independence.

Unusual artefacts that caught our eye included the oldest football (from 1540) and the oldest curling stone (1511) ever made.  The world’s oldest football was actually made in Stirling and discovered behind the panelling of the Queen’s Chamber in Stirling Castle when it was decorated in the 1540’s.  Mary Queen of Scots was resident there at that time and later in life was known to have an interest in all sports, especially golf and football.

The two staff on duty were both very friendly and helpful, making us feel very welcome and providing more insight into some of the items on display.  After looking around we popped into the inviting little Gallery Cafe for a drink before setting off for a tour of the town centre and a look around the shops.

The centre is compact and easily walkable with a good mix of shops, cafes and bars along the high street and along the roads leading from them.  Our walk continued to the indoor Thistles Shopping Centre which includes a large variety of household names.  Interestingly, by chance we came across a small free tourist attraction just inside the Port Street entrance next to WH Smith’s.

Following a sign attached to the wall, we carefully made our way down a narrow spiral staircase to the Bastion Jail and Thieves Pot.  This 16th century dark cell beneath what was once the bastion contains a display of its history as part of the Royal burgh’s defences.

From information boards we learnt that above the cell used to be a defensive tower guarding one corner of the town’s walls.  It’s only small, but very interesting to take a look at and quite extraordinary that it has been preserved within the modern shopping centre.

A little more shopping followed before we returned to the station just as it was starting to rain.  Stirling had been easy to reach from Edinburgh and I would very much like to have an opportunity to return at some point when all the attractions are operating normally. 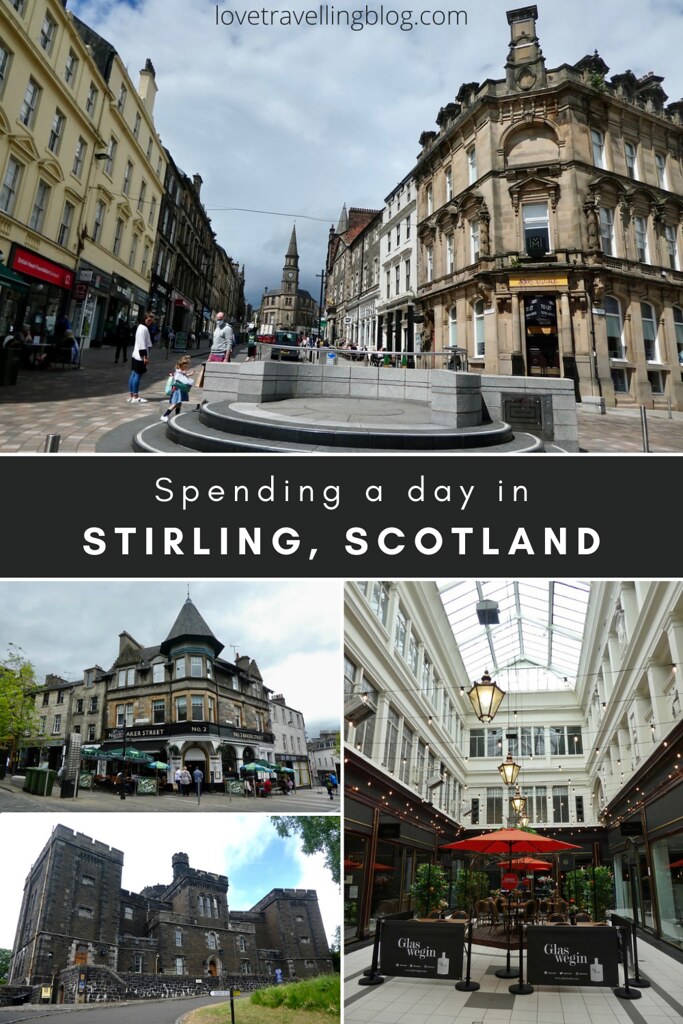