From our base at the Altido Vita aparthotel in the Fountainbridge district of Edinburgh it was just a ten minute walk downhill to Haymarket station for our train to St. Andrews (Leuchars station).  We’d pre-booked our tickets (£18.50 standard off peak day return) for the one hour journey and as we were sitting on the right hand side of the train (in the direction of travel) we enjoyed splendid coastal views.  Not to be missed is experiencing the journey across the Forth Rail Bridge at Queensferry, nine miles west of Edinburgh.  When the bridge opened in 1890 it was the most prominent steel structure of the Victorian era and is now a UNESCO World Heritage Site.

The rail line hugs the rugged coast for most of the journey and passengers for St. Andrews need to leave the train at Leuchars as there is no rail connection to the town.  Buses shuttle between the station and St. Andrews at approximately ten minute intervals so there is never long to wait.  The only downside is that the bus is extremely expensive at £6.50 for an adult return when the journey is only around 12 minutes.  As there were just two of us we used the bus but for larger groups it might be less expensive to take one of the waiting taxis.

Many people will have heard of St. Andrews even if they have not visited as it is known as the home of golf and home to Scotland’s oldest university where our future king, Prince William studied and met his wife Kate Middleton (now the Duchess of Cambridge).  We started our tour of this historic seaside town in Fife by taking a walk through old stone archways to the small harbour.  In medieval times the small town traded widely and it seems hard to believe today, that at its peak it could hold up to 300 ships.

The pretty harbour dates from the thirteenth century with its main pier extending into the North Sea.  A small fleet of fishing boats are based here and we spotted piles of lobster pots drying along the shore.  After our early start we were ready for a morning cup of coffee which we enjoyed out on the terrace of the Harbour Cafe overlooking the marina and the East Sands Beach.

Feeling refreshed after our coffee fix, we were on our way again climbing the steep slope up to the ruins of St. Andrews Cathedral.  This was Scotland’s largest and most important medieval church and was once the seat of the country’s leading bishops and archbishops.

The cathedral was built in the 12th century and for 700 years pilgrims flocked here from all over Europe.  It’s grounds are dominated by St. Rule’s Tower which is still intact but most of the cathedral was ransacked in 1559 and in the years that followed it was abandoned and fell into disrepair.  Some of the stone was used to construct local buildings and to build the harbour pier which nestles just below the cathedral grounds.

Continuing slightly further along the cliff top we strolled past cannons pointing out to sea and onto more ruins, this time of the castle.  Perched on a rocky promontory St. Andrews Castle has served as a bishop’s palace, a fortress and a state prison during its 450 year history.

The stronghold played a part in the darkest days of the reformation when Protestants were incarcerated in its bottle dungeon.  Visitors can explore the still intact underground mine passage to view the medieval warfare and then peer into the infamous bottle dungeon.  Standard entrance £7.20.

Our walk continued towards the West Sands which might be recognised as it was immortalised in the opening scenes of the famous historical drama Chariots of Fire.  This 1981 film tells the story of two British athletes who brought glory to their country in the 1924 Paris Olympic Games.  The beach extends for almost two miles with its sand dunes providing a natural defence against the sea and a habitat for plants.

Our route lead us on to The Scores, a tree lined footpath which is adorned with many historic buildings occupied by the University of St. Andrews.  Along here is also to be found MUSA (The Museum of St. Andrews) for those interested in the institution’s history.  Further along the headland, the Martyr’s Monument was erected in 1842 to commemorate four leading Protestant figures who were executed by the Scottish reformation in the 16th century.

It was from this viewpoint that we caught our first glimpse of the St. Andrews Links where we were heading next.  It was here in 1754 that the world famous Royal and Ancient Golf Club was founded with its famous Old Course hosting the British Open Championships every five years.

We recognised the Royal & Ancient Clubhouse as it is an iconic image from our television screens as players walk up to the 18th green.  Playing on the Old Course must be on every golfers wish list and surprisingly being able to do so isn’t as difficult as you might expect as any golfers with a respectable handicap can apply.  If like us, your golf doesn’t stretch further than pitch and putt you can take a stroll along the footpaths and watch the experts in action.  On Sunday’s golf is not played on the Old Course and the public are welcome to walk the famous links.

St. Andrews Links is comprised of seven golf courses which were all in use on the day we visited.  We walked past The Himalayas putting green which lies between the Old Course and West Sands Beach.

This takes its name from its undulating course and many small hills providing a putting challenge whatever your skill level.  There are 9 and 18 hole options and the course is open to everyone over the age of three.  We would have loved to have played a round there as it’s only £4 for adults but with COVID restrictions it’s not possible to hire putters at present and it would have been quite an effort to have brought them up with us on the train.  (I do believe we still have some clubs that have been stored undisturbed at the back of our hall cupboard for many years).

We might not have been playing golf but we were on our way to something golf related.  I’d booked a table for lunch at the Tom Morris Bar and Grill located in the Links Clubhouse to celebrate my husband’s birthday.  The modern clubhouse offers facilities for golfers playing on the Old, New and Jubilee courses, with a large golf shop and a casual dining restaurant which is open to the public.

We were shown to a window table overlooking the links and we studied the menu over a glass of Tom Morris Scottish Ale for the birthday boy and a glass of wine for me.  The restaurant re-opened last month after a major refurbishment timed perfectly to celebrate the life and legacy of the grand old man of golf two hundred years after his birth.

Tom Morris was a four time champion golfer who helped to shape the modern game.  Dining in the restaurant were a mix of golfers and people like us, all enjoying a delicious meal in relaxing surroundings.  I opted for the Scotch rump steak on sourdough topped with caramelised onions and a free range egg (£13) whilst across the table the roast hake fillet served in a curried mussel, carrot and leek stew (£18) was a popular choice.

Awhile later we sauntered back beside the links before heading into town.  The centre is very pleasant and has a good range of high quality independent shops, with Scottish tartans, whisky, gifts, books and golfing equipment amongst the items on offer.  As we were a little early for our bus connection back to Edinburgh we popped into a cafe for a pot of tea before returning to the bus station.

It had been a lovely day out in St. Andrews and we hadn’t felt rushed at all so I would definitely recommended adding a visit to this part of Fife to your Scottish itinerary. 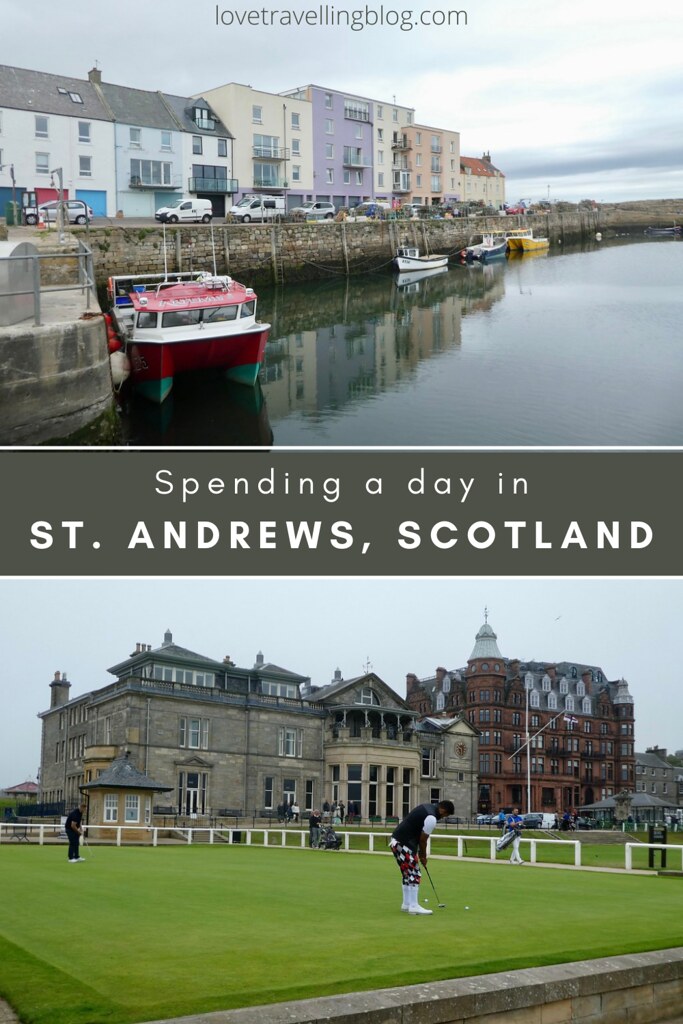