Abingdon is a market town in Oxfordshire nestled on the banks of the River Thames.  I was long overdue a return visit as the previous occasion was more than 25 years ago when I attended a wedding in the town.  Although Abingdon does not have a railway station the nearest one is located only three miles away in Radley which has bus connections into the town centre.

It was a sunny, but cool April day and the town looked beautiful with its carefully tended flowerbeds brimming with spring colour.  We had left the car in the town’s multi-storey car park which was just a short walk from the market place and were pleased to find that the first two hours of parking was free.

The historic market place is the beating heart of the town with a weekly market taking place each Monday along with other events throughout the year.  The square is lined with shops and cafes with their outdoor tables edging onto the market place making it a good spot to enjoy a cup of coffee on warmer days.

At the head of the square stands the church of St. Nicolas and to its side the splendid Baroque County Hall.  This hall has dominated the market place since the late 17th century where it housed a court room on its first floor.  It is built on raised arches under which stall holders used to trade.

The County Hall is now home to the Abingdon County Hall Museum which offers free admission with a £2 charge to access the roof terrace at the top of the museum’s tower.  The unusual tradition of bun throwing by civic dignitaries has taken place from this rooftop since the 1761 coronation of King George III. Bun throwing in Abingdon celebrates royal marriages, coronations and jubilees with the most recent bun throwing taking place in November 2018.  On that occasion 5,000 buns were thrown to the crowds standing below in celebration of the centenary of the end of the First World War.  The museum explores the history of Abingdon and the surrounding area and on display are a collection of buns which have been dried and varnished as a lasting reminder of this ancient tradition.

The MG Car Company (Morris Garages) was a sports car manufacturer that produced cars in Abingdon between 1929-1980.  The company was best known for its two seater MGB Roadster open top sports car and taking pride of place in the museum is the last car to come off the production line before the factory closed.  To get the car into the museum wasn’t easy as it had to be hoisted up to the first floor and taken in through a window.

Leaving the museum we enjoyed lunch in The Narrows pub on the high street then walked along to the riverside which is just five minutes from the market place.  Standing on the old bridge we had good views of this scenic stretch of the River Thames with its waterside pubs and collection of boats moored along the riverbank.

Heading slightly back inland and passing the old gaol we slowly made our way back to the riverside near the ancient parish church of St. Helen’s which traces its roots back to 1100.  An unusual characteristic of this church is that it is the second widest in England having five aisles and being 10 feet (3 metres) wider than it is long. Surrounding the church are three sets of medieval almshouses, the Long Alley one retaining its original cloister features, looking particularly beautiful.

The winding lane ended a little further upstream at St. Helen’s Wharf which seemed an ideal spot to feed the ducks as they all seemed to be gathering there.  We strolled along a short section of the Thames Path which is a national trail running from the source of the river in Kemble, Gloucestershire to the Thames Barrier at Charlton, south east London.  The entire path is 184 miles (296 km) in length.  We have walked numerous sections of the trail on our visits to London but not further afield until now.

After taking in the panoramic views both up and downstream we returned to our car stopping to glance in some of Abingdon’s small but interesting shops on our way.  After such a pleasant visit, I’m certain it won’t be quite so long until I’m back in Abingdon once again.

Richmond on Thames – A walk along the river 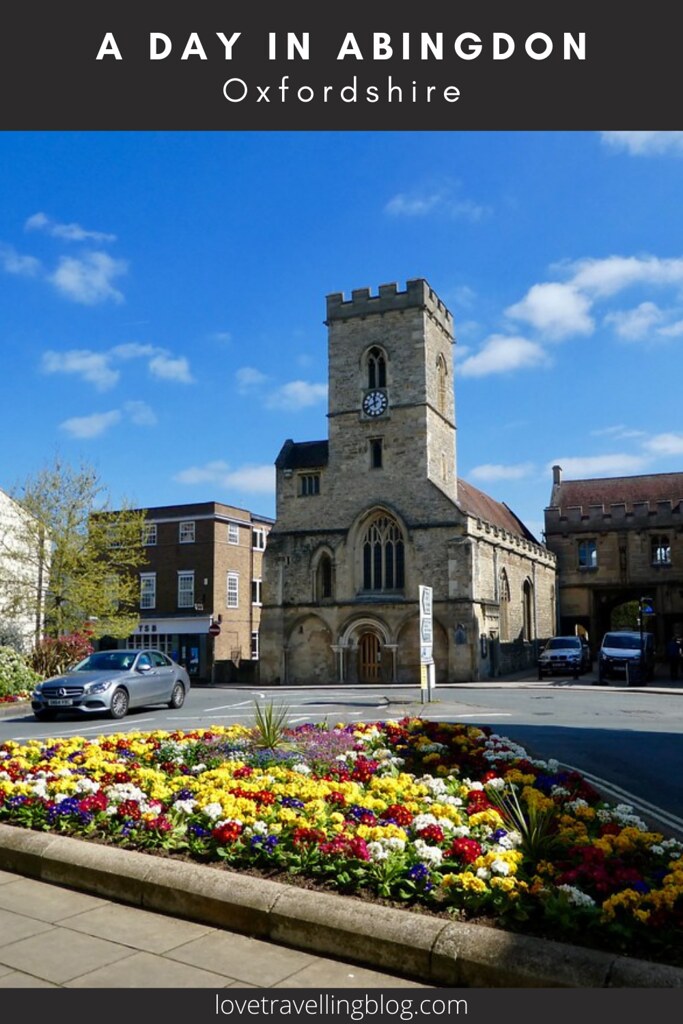 41 thoughts on “A day in Abingdon, Oxfordshire”