This 5 mile walk along the Regent’s Canal passes through some of London’s best kept secrets including Regent’s Park and Little Venice whilst avoiding the congestion and crowds of life in the capital.

Our walk started outside King’s Cross station from where we wandered around the corner to Granary Square and the vibrant Coal Drops Yard with its mix of shops and street food.  This recently restored area makes a great place to enjoy a bite to eat before striding out along the towpath.  These converted Victorian brick viaduct arches were once the freight rail yards of the industrial revolution.  From here, the canal linked King’s Cross to industrial cities in the north of England carrying coal and other goods to the capital.

Taking pride of place in Granary Square is a restored granary building that once stored wheat for London’s bakers and is now home to Central Saint Martins, part of the University of the Arts London.  The building was designed by Lewis Cubitt the architect who also designed King’s Cross Station.  There are plenty of places to sit around the square with its fountain centrepiece which transforms at dusk when it is illuminated with multi coloured lights.

On the far side of Granary Square at West Handyside Canopy, a covered market takes place at weekends.  With stalls filled with craft beers, cheese and gifts it’s a great opportunity to buy from local producers.  It was very tempting for us to do so, but on this occasion we resisted the temptation as we didn’t want to carry bags around all day.

Coal Drops Yard is located just behind Granary Square and here we found a Japanese market taking place.  The market took inspiration from Japanese local markets with its 20 stalls displaying gifts, ceramics and kitchen equipment along with food stalls offering a taste of Japanese cuisine.  This was especially welcome for me as I was due to visit Japan last year but I’m hopeful of being able to travel there in the next year or two.

After finally managing to drag ourselves away we headed down to the canal at St. Pancras lock and set off walking in a westerly direction.  Along this section of the canal is a mix of old and new architecture with a traditional lock keepers cottage sitting on a small island surrounded by the sleek new developments of King’s Cross.

Soon we had reached Gasholder Park where the frame from a former cast iron gas holder has been used to create a sculptured canopy and lawned area.  Not only that but 145 canal side industrial chic apartments have been built within a further three refurbished gas holders and I couldn’t believe how stylish they looked.

Our walk wound its way along the canal to Camden Lock, the only twin lock in London.  It’s also the home to the popular Camden Market which is open each day from 10.00 a.m.  A small market started here with just 16 stalls in 1974 and it has now grown to become the largest in London.  We called in The Ice Wharf for a drink, the pub being named after the adjacent ice wharf built in 1837 for ice imported from Norway.

Feeling refreshed, we were soon on our way again picking up the path from the towpath on the other bank after spending a short time browsing the street food stalls and inhaling the heady spicy aromas.  The next part of our walk took us alongside Regent’s Park and its zoo, where we could see the nets covering the aviary and the landing stage for those arriving by boat to the zoo.

In this section algae covered the water, becoming denser the further we walked along the canal, so thick in places that it could have been mistaken for grass.  The summer heatwave had left the canal resembling a swamp and even though leisure boats frequently passed by dispersing the murky algae it connected back together seconds later.

Just past the zoo are a collection of grand villas with large gardens leading down to the canal.  One of them is Winfield House, the official residence of the U.S. ambassador to the United Kingdom.

Continuing along the canal we soon reached Maida Hill Tunnel, a 249m long underground stretch without a tow path, so we had to leave the canal and follow at street level.  After the brief detour we soon reached the leafy enclave of Little Venice, and in my opinion, one of the prettiest parts of London.  Unlike its Italian namesake there are no gondolas here but instead some of the most beautiful houseboats you could wish to see.  Due to these private moorings, the towpath is closed to the public along Blomfield Road but peering through the railings as we walked along the pavement we had good views of the houseboats.  The owners take great pride in their floating homes which always look freshly painted and adorned with tubs of geraniums on their roofs.  On their private towpath boat owners have created idyllic little cottage style gardens and seating areas beside their boats with flowering clematises clinging to walls and trellises.

Despite having to leave the towpath along this stretch, there’s much to see as elegant Georgian villas with white stucco facades line both Blomfield Road and Maida Avenue.  Re-joining the towpath, the canal widens where the Regent’s Canal meets with the Grand Union, this section being known as Browning’s Pool.  It’s a vibrant area overlooking tiny Browning Island and is where 45 minute leisure boat trips start from heading towards Camden Lock.

We discovered several inviting floating barge cafes and even a Puppet Theatre barge on a 20 metre long houseboat converted to hold a stage.  I’m certain young children will be looking forward to watching performances on there when it re-opens.

It was then just a half mile walk along to Paddington basin which has a contemporary feel and is quite a contrast to the Georgian splendour of its near neighbours Maida Vale and Little Venice.  Different it may be, but this new waterside development in west London is nonetheless impressive with its floating restaurants, shops, gleaming office blocks and cleverly designed public spaces.  These high end shops, bars and cafes have already made Paddington a vibrant foodie hotspot.

At Sheldon Square a selection of bars and restaurants surround a public amphitheatre featuring a giant screen which must surely be a popular spot for office workers to enjoy their lunch when they are back in town.

The district is also home to Paddington Sculpture Trail with numerous pieces of public art.  The art work I’ve featured above is one of two life-size men standing apart by several metres, as if they were about to meet.

At the far end of Paddington basin is Merchant Square and here we found London’s first floating pocket park.  This 45m green oasis has been created from a series of interlocking pontoons made to resemble reclaimed wood complimenting the area beautifully with seating and a food truck.

We could have ended our walk here and returned from Paddington but instead we decided to continue slightly further and take the District and Circle line from Edgware Road underground station.  Along the way we passed the Lindo Wing of St. Mary’s Hospital where the last two generations of the Royal Family were born.

I hope you have enjoyed my walk through some of the most scenic parts of London.  If you don’t feel like doing the walk all in one go, it can be split into sections or combined with a climb up Primrose Hill and/ or a visit to Regent’s Park. 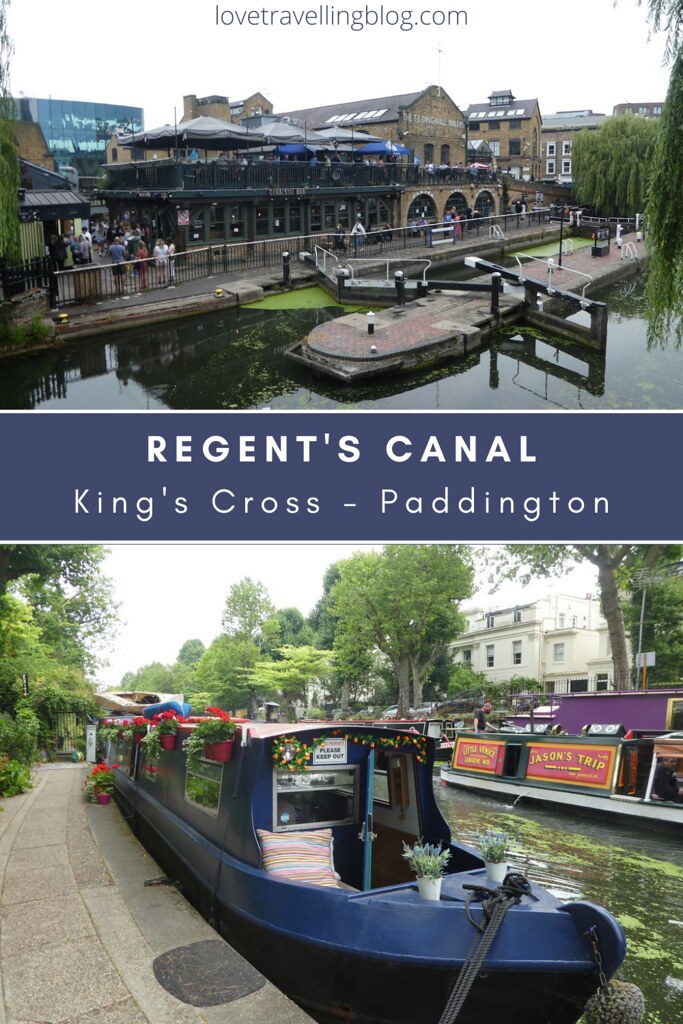