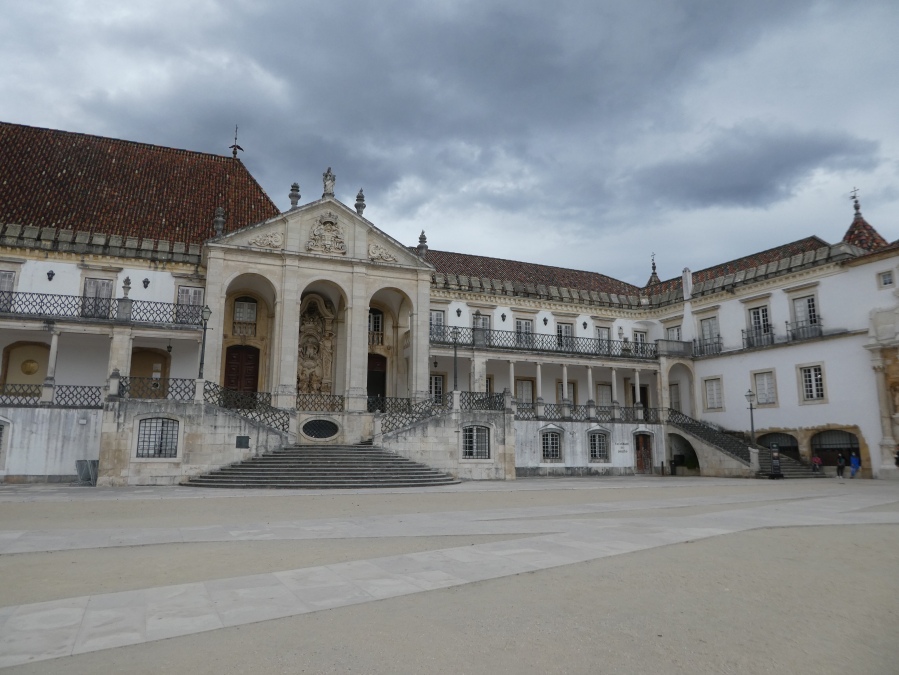 We were interested to visit Coimbra as it was the medieval capital of Portugal for just over 100 years from 1145-1255 when King Afonso moved his court to Lisbon.  The city is also home to one of Europe’s oldest universities.

Trains from Porto to Coimbra depart from Campanhã station which is on the main north-south Lisbon to Porto line.  Discounted mobile tickets can be purchased a minimum of five days in advance with confirmed seat reservations on specific trains and these were €17 each.  We chose to take the 10.38 service from Porto which arrived into Coimbra B at 12.00.  This station only handles long distance trains and so we then needed to board a shuttle service into Coimbra A taking a further five minutes.

Coimbra station has an attractive façade and is located in the city centre close to the river and the pretty Largo da Portagem with its pavement cafes, banks and other businesses.  This small square was once the gateway to Coimbra for those arriving into the city by boat.

The square leads onto the Rua Ferreira Borges, Coimbra’s main pedestrianised street with its diamond patterned mosaic paving.  It’s a pleasant place for a spot of window shopping and leads gently upwards to the Torre de Almedina archway which marks the entrance to the old town and is a lasting reminder of the old city walls.

Coimbra is full of steep hills so come prepared with a pair of sensible shoes.  Continuing through the archway the slope becomes increasingly steep as it winds its way along cobblestone lanes to the Cidade Alta.  We did notice a small bus pass by, so this might be an option on a hot day or for the less energetic.

The city is divided into two distinct sections, the Cidade Alta (high town) and Baixa (lower town). The medieval city of Coimbra was divided between the classes with the nobility and clergy residing at the highest part of the city whilst the poorest inhabited districts close to the river which was subject to frequent flooding.

The path eventually brought us to the gates of the University Botanical Garden but before entering we gazed over the stone wall at the panoramic views spread out below along the Mondego river.

We then wandered into the Botanical Gardens which offer free admission and was founded in 1772 for the medical and history faculties of the university.  The gardens cover 13 hectares and are divided into two sections.

We decided to start with a stroll through the woodland gardens and the spectacular bamboo forest.  The path led steeply downwards and although we had expected to loop back up along another trail we had to retrace our steps as some work was being carried out ahead blocking our way.

Having returned to the main entrance gates we turned in the opposite direction to view the formal gardens which are of a neo-classical design with stone fountains and sculptures. Flowerbeds are laid out in a geometric design and it’s a delightful place to sit and relax on one of the park benches.

We had hoped to go inside the tropical greenhouse which was constructed in 1856 and is one of the oldest iron buildings in the country.  It contains both tropical and sub-tropical plants but we could only peer through the windows as it was closed for renovation.

The Aqueduto de Saö Sebastian runs along the edge of the gardens and we passed this on our way up yet more steep slopes and 125 further steps to reach the University of Coimbra.

The university stands high on a hill and is set around a former royal palace where Portugal’s first kings once resided.  The Alcaçova Palace was donated to the university by King Joāo III in 1537.  This historic part of the university has been a UNESCO World Heritage Site since 2013.

We entered through the main gateway which was the former entrance to the palace.  Its vast courtyard is an absolute delight and is surrounded on three sides with magnificent buildings with a viewing terrace on the other overlooking the city below.

Visitors are welcome to explore the grounds but tickets are required for tours of its stunning library, grand ceremonial hall and to climb the 180 steps up its exquisite clock tower.  If these had been open, it would have certainly been a marvellous experience but it wasn’t to be on this occasion and we happily settled for viewing the exterior instead.

The Biblioteca Joanina is a magnificent Baroque library containing over 200,000 books.  It’s also home to a colony of bats who are welcome to call the library home as they help to protect the books from insects.

We took a different but equally steep route back downhill following some steps to one side of the library.  All this walking called for a late lunch and we soon found a table near the cathedral for a refreshing glass of beer and a sandwich.  The Sé Nova (new cathedral) of Baroque design is 500 years old and was formerly a Jesuit temple.

Following our short rest we returned to the Mondego riverside for a stroll across the Pedro e Inês bridge.  Whilst sitting at the pavement cafe we’d noticed dark clouds gathering but as we crossed the bridge we heard loud claps of thunder and the sky became inky black.  Thankfully, it hadn’t started raining so we continued on our way.

The footbridge was constructed in 2007 and is formed of two cantilevered halves which are slightly offset in the middle to form a zigzag shape.  The brightly coloured balustrade is made from sheets of yellow, pink, blue and green glass designed in an irregular pattern.

On reaching the south bank we hurried along through the riverside park as it was just starting to rain.  There were excellent views looking back across the river to Coimbra’s old town with its buildings seemingly clinging to the hillside and reminiscent of Porto where we were staying.

There was insufficient time to visit the Mosteiro de Santa Clara-a-Velha which sits on the south bank of the river.  It was abandoned in 1647 after the building suffered from repeated flooding by winter rains.  The nuns moved to a new building on higher ground where they founded the Santa Clara-a-Nova convent.  In 1995 the submerged level of the old convent was excavated and restored as a museum.

We returned to the station across the older Santa Clara bridge and as we were a little early for our 17.21 train we took refuge in a nearby bar as the rain had become torrential.

Back on the train to Porto we were serenaded by music as some girls sitting behind us were playing karaoke music loudly on their phones and singing along to it to a mixed reception of fellow passengers, so there was little chance of a short nap.  Fortunately the rain storm had passed by the time we returned to Porto’s Campanhã station from where we took the metro back to Bolhão less than five minutes from our hotel.  It had been a lovely day out and if time allows on a visit to Porto I would definitely recommend adding Coimbra to your itinerary.

Visiting Cascais and Estoril from Lisbon