After enjoying breakfast in the aparthotel’s cafe we went along to the nearby Trindade metro station to take a train across the Douro to the Jardim do Morro station.  Staying in the Bolhāo district appealed to us with its close proximity to Trindade as all lines can be accessed from this interchange station.  As we had already purchased Andante travel cards we just needed to add Zone 2 journeys to each of them at €1.20 each.  The metro crossed the upper tier of the Luis I bridge before reaching our stop on the south bank.

Leaving the metro, we walked along the pedestrian footpath at the top of the bridge taking in the breathtaking views of the Douro river, boats and of the many pastel coloured houses clinging to the hillside creating a charming panorama as far as the eye could see.

The upper level of the bridge is 45 metres (146 ft) high so I wouldn’t recommend walking across if you suffer from a fear of heights but you do enjoy a bird’s eye view of Porto from this vantage point.

Returning to near where we alighted the metro, we wandered into the small Jardim do Morro which is defined not by its flowers but by the stunning views from its hilltop.  We gazed in awe at the incredibly beautiful views and of the Mosteiro da Serra do Pilar atop the hill.

Located next to the park is the Teleferico de Gaia which transports tourists between the top of the bridge and the river embankment.  Although we enjoy riding in cable cars, on this occasion we decided to walk down the steep hillside as it was still reasonably early and it wasn’t too hot.

It’s an interesting walk through this old part of town that took us along narrow passages, down flights of stone staircases and past many old warehouses.  This side of the river is noted for its port warehouses with famous names such as Taylor’s, Sandemans and Cockburn’s all having a presence here.  I’m actually not a fan of port but along with a glass of sweet sherry it was my mother’s favourite tipple mixed with orange juice.

The numerous wine cellars organise tastings and guided tours of port wine manufacturing, which would likely be very interesting even to those of us preferring a gin and tonic.

A recent addition to the district is the newly opened cultural attraction known as WOW (World of Wine).  When completed it will include six museum experiences, nine restaurants, shops and a wine school.  In the Wine Experience, visitors can gain a greater understanding of wine production around the world; while Planet Cork tracks Portugal’s role in the cork industry right back to its oak tree roots and looks at how the material popularised by wine stoppers has also made its way into the aerospace industry and onto catwalks.  But wine is just the starting point; there’s also a museum dedicated to the history of chocolate, and another space will focus on Portuguese fabrics and fashion.  It all sounds interesting and somewhere appealing to visit when it’s fully open.

We had now reached the riverside which was bustling with activity at 11.00 a.m. on a Sunday morning.  The promenade seemed a popular meeting place for groups of bikers and cyclists at some of the numerous bars and cafes that line the waterfront.  We walked along to the end of the footpath in a westerly direction and then slowly wandered back towards the huge Luis I bridge which must have been a feat of engineering at its time of construction.

The south bank of the Douro is extremely pleasant with a mixture of old warehouses and new buildings sitting side-by-side in an an attractive manner.  The broad promenade is tastefully adorned with a series of flagpoles representing each of the port wine houses whilst along the quay are a line of traditional Rabelo boats.

These traditional Portuguese flat bottomed wooden boats were used for centuries to transport port wine from the Douro valley to the cellars surrounding us.  Before the arrival of the railway, the Rabelo was the fastest method of transporting the barrels to Porto from where it was traded and exported worldwide.

Our morning stroll then took us back across the bridge, this time along its lower tier where the views were almost as good as from the top. Our planned activity for the afternoon was to take a ride on one of the historic trams to the Foz district.

The tram stop wasn’t too far away, just up the hill and near to the former stock exchange, the Palacio da Bolsa.  This impressive building was constructed in the 19th century and was also the Court of the First Instance.  Nowadays its home of the Porto Commercial Association and a venue for numerous events in the city.

Tram Line 1 from Infante Passeio Alegre departs at 20 minute intervals and as we arrived at the stop five minutes before the tram was due to depart there was already a lengthy queue.  Consequently, we were the first to be denied entry and so had to wait patiently for a further 20 minutes until the next service arrived.  It wasn’t really much of a problem though as it meant we got first choice of seats.  Do try and sit on the left as the route hugs the river all the way along its 25 minute journey with some impressive views.  Single fares are €3.50 with contactless payments only accepted.

As there was even a lengthy queue for the tram during the Pandemic when very few tourists were around, it must be an extremely long wait in normal times.  If you arrive at the tram stop and the queue is lengthy then you could consider crossing the road and taking Bus 500 which follows the same route.  This wouldn’t be quite the same as riding the heritage tram complete with its wooden panelled interior and red leather seats but at least it would be an alternative to waiting ages.

The tram line terminates at Passeio Alegre in Foz do Douro, translated it means ‘at the mouth of the River Douro’.  After watching the driver move the pantograph round and flip the seats for the return journey we were ready to set off for a long walk along the seafront.

There are numerous lighthouses where the river meets the sea that guide the ocean going ships into the river.  The centre of Porto no longer functions as a port as it is much too small.  To replace it, a modern container port has been built further along the coast at Matosinhos towards which we were heading.

We didn’t have to walk very far to find the first of these lighthouses as just across the road from the tram stop are the remains of the old harbour lighthouse and seamen’s chapel.

Continuing in a northerly direction, a few minutes later we crossed the tree lined promenade to take a walk in the shady Jardim da Foz where we found a Sunday market taking place offering a mixture of fresh produce and craft stalls.

Back on the Avenida do Brasil, the beach stretched out as far as the eye could see.  The views varied between flat sandy beaches and rocky bays where we watched large waves crashing onto the rocks and children eagerly trying to catch small crabs in the sheltered rock pools.

Spotting the Felgueiras lighthouse, we strolled to the end of the pier to view its granite exterior in more detail.  Even on a relatively calm day huge waves could be seen and fishermen were sitting patiently waiting to land a catch.

We were beginning to feel ready for a little rest so when we spotted an attractive beach bar on the Praia de Gondarem we grabbed a table right by the water’s edge and enjoyed glasses of lager under a fringed parasol.  It was so nice sitting there that it was difficult to drag ourselves away but eventually we raised the energy.

Rather than our wooden beach huts we noticed rows of red and white tent like structures sponsored by the ice cream company Ola.  The pavement then changed into a wooden boardwalk with a cream coloured 1930’s style stone colonnade to one side.  Another fort came into view, this one being the Forte de Sao Francisco Xavier.  It looked interesting and we planned to take a look inside but just as we approached the large wooden doorway a member of staff appeared with a large closed sign so we were out of luck.

Ahead of us was a large sweeping bay and we realised that we had reached the Praia de Matosinhos, the most popular of Porto’s beaches.  I was surprised to see so many people taking a dip in the sea as the Atlantic Ocean is much colder than the Mediterranean even on a warm summer’s day.  The panoramic views of this beach are somewhat marred by the appearance of the container port at the northern end but if you ignore this, then it’s a pleasant wide sandy beach.

Finally we turned inland to the above ground metro station at Matosinhos Sul from where we bought Zone 3 tickets at €1.60 each which took us back to Trindade just five minutes walk from our hotel.  On checking my phone I noted that we had walked 11 km so it was nice to rest our weary feet for awhile and enjoy a cup of tea. 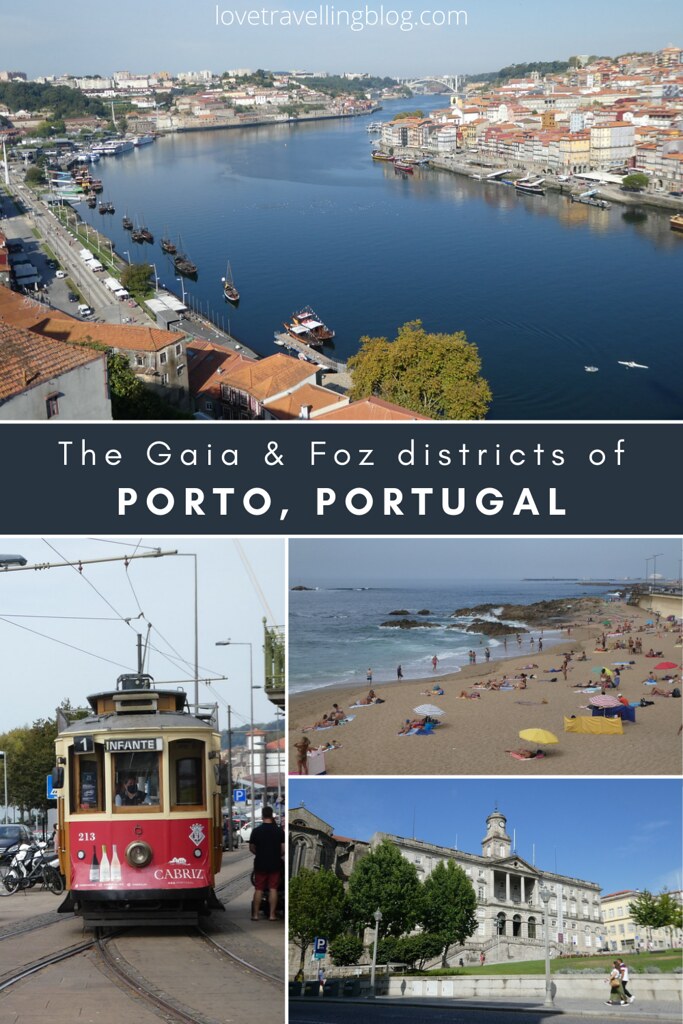 58 thoughts on “Day 2. Exploring the Gaia and Foz districts of Porto”