After spending the first two days of our holiday exploring Porto we were ready to travel further afield so after a hearty breakfast we headed off to Saō Bento station where we marvelled once again at its exquisite blue and white tiled concourse.

From the ticket office we requested return tickets to Guimaraes with discounted cable car tickets as advertised on the Portuguese rail website.  Unfortunately, on the English version of the website it did not state that these were only available at weekends or for groups of 10 or more so we just bought standard returns at €7 each.  Tickets then need to be validated on the platform but this cannot be done more than 15 minutes prior to the departure of urban trains.  We were there 20 minutes early as we didn’t know if there would be a queue at the booking office so, although the train was in, we waited patiently until the due time to validate our tickets.  We did notice other passengers doing this earlier and then boarding the train but we complied with the instructions just in case of any problems.

As the service was departing from Porto there were plenty of seats available and we sat back and enjoyed the ever changing views from the train window during the 75 minute journey.

The station is located south of the city, and just a ten minute walk from its UNESCO World Heritage Centre noted for its exceptionally well preserved buildings.  On our way towards the main square we came across a beautifully restored mansion, the Centro Cultural Vila Flor which since 2005 has been transformed into a cultural centre.  It is surrounded by formal gardens but as these were closed we peered through the iron railings to view them and take photos.

Our stroll then took us into the centre where the melodic bells of St. Peter’s Basilica were just chiming midday as we approached. The narrow cobblestone roads around Largo do Toural contains historic colourfully painted buildings, most of them with intricately designed wrought iron balconies.

It seemed very quiet everywhere and it was so sad to see so many empty tables and chairs outside bars and restaurants in the pretty little courtyards.  Oliveira marks the main centre with the church of Nossa Senhora da Oliveira.  This square takes its name from an ancient olive tree which is still growing in the centre providing welcome shade in mid-summer.

After our first two days of wall-to-wall sunshine the blue skies had deserted us on our visit to Guimaraes and as can be seen from the photos, it was an overcast day.  Rue Santa Maria is a little thoroughfare lined with numerous shops and restaurants and a pleasure to walk along as it gave us the feeling of having travelled back in time with its quaint shop fronts, doorways and passages.

Having explored the historic centre we made our way towards the castle which dates from the 10th century.  It was a leisurely ten minute uphill stroll and before reaching the castle itself we paused to admire the beautiful tiling on the porch walls of the Convento de Santo Antonio Dos Capuchos.

Nestled beneath the castle is the Dukes of Braganza Palace which was inspired by 14th century northern European architecture.  Despite its large oak door being open, the palace was actually closed to the public but an information board informed us that it had been restored and was now decorated with 17th century furnishings.

We then got our first glimpse of the ancient castle which stands at the top of Largo Hill.  It’s located at the far end of an elegant tree lined avenue and was constructed to defend the nearby monastery from attack by the Moors and Vikings.

By the 12th century it had become the seat of Portugal’s first King, Afonso Henriques.  The castle had lain in ruins for many years until the 1990’s when its keep and seven towers were restored.  Admittance to the castle is only €3 but sadly, it was also closed to visitors.  A little disappointing but we were still able to enjoy a stroll along some of the trails in the small forest park surrounding the castle.

From the castle it was then a 15 minute walk to the other side of the city to reach the Teleferico de Guimarães to take us up to the top of Penha Hill.  There was no-one else waiting to board one of the cable cars so we could have actually had one each if we had preferred.  Tickets cost €7.50 euros return for the 8 minute journey.  It was difficult to take photos from the cable car as the glass windows were heavily tinted but we enjoyed panoramic views over the treetops and occasional houses beneath us.

From the cable car station it was then a few minutes walk to the Penha Sanctuary which is surrounded by an ornamental pool and flowerbeds.  Religious music was being softly played through loudspeakers from the sanctuary giving an air of calm.

Around the side of the sanctuary we came across a large viewing terrace but as it was so hazy our views were not as good as they might have been.  It was incredibly quiet up there and we only came across three other people whilst walking around.

Next, we followed a short trail up to the Miradouro do Pio IX which took us alongside some very large granite boulders which I’m sure children enjoy scrambling over.  It was worth the effort to climb up to this viewpoint as we could see the sanctuary from the hilltop and we thought it looked much prettier from there.

We then carefully made our way back down the steep paths to the cable car station for the ride back to the city centre.  On the way back to the medieval quarter we passed the absolutely beautiful gardens of the Largo da Republica do Brasil and slightly further along the Church of Saō Francisco with its blue tiled facade.

All this sightseeing and walking up and down steep hills had made us hungry so we enjoyed a delicious three course lunch out on the terrace of the Café Mercurio before returning to Porto on the 16.50 train.

It had been a lovely day trip and a city I would recommend visiting whilst taking a holiday in northern Portugal.  Do please check train times before planning an excursion to Guimarães though as they are quite erratic, especially during the afternoon.  Day tickets are valid on all urban services enabling passengers to return as they wish.

A visit to Portimao, The Algarve 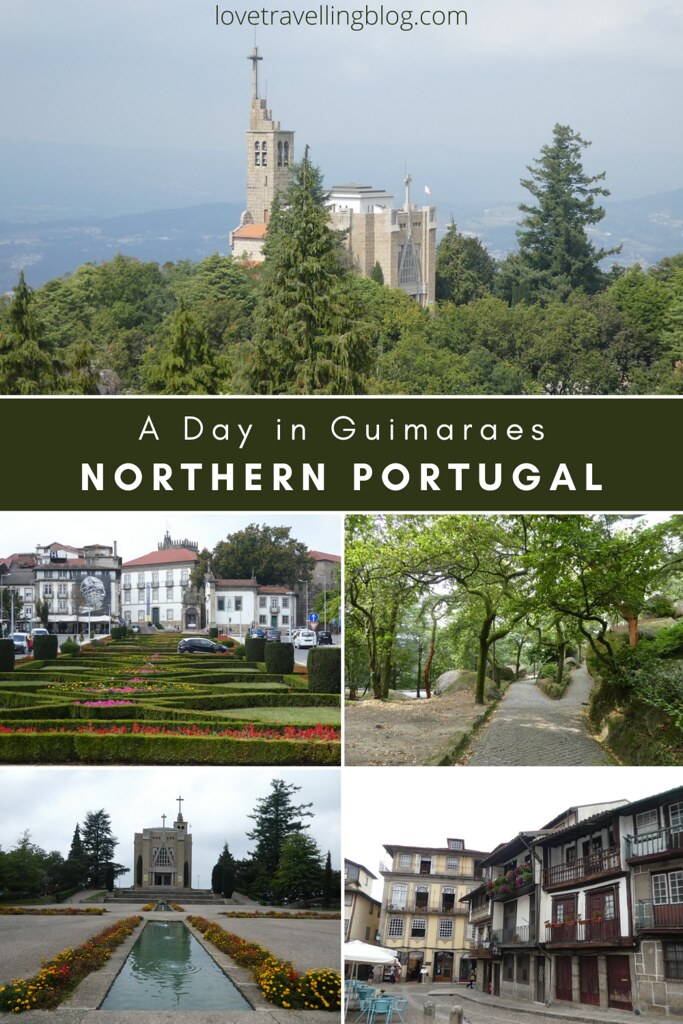