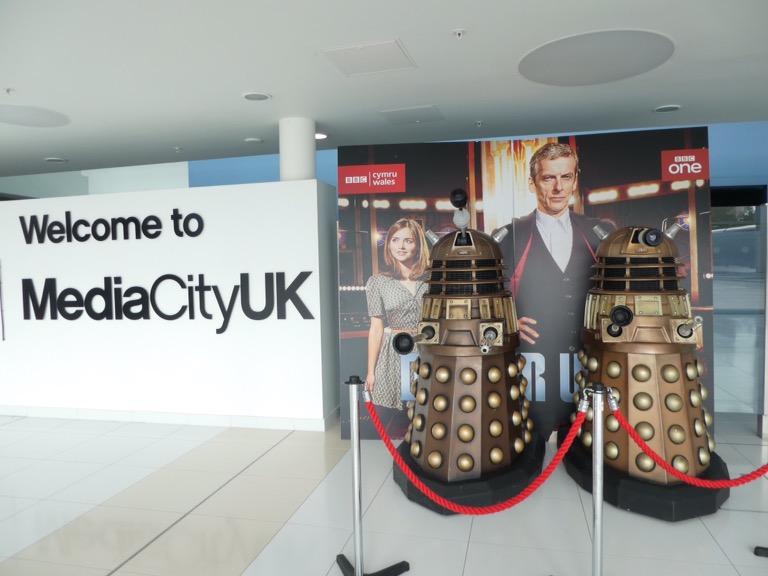 On a recent visit to Salford Quays we noticed that it was possible to take guided tours of parts of the television and radio studios – so when we returned home we visited the BBC website and booked online.  Tours last 90 minutes and cost £11 per person with concessions available.  A maximum of 22 visitors are allowed on each tour so it’s necessary to plan ahead especially if you wish to visit at the weekend like us.  There is a choice of two tours – the standard one that we selected or the CBBC one which has a greater emphasis on children’s programmes.

Our tour was booked for 10.45 am and it was recommended that visitors arrive 15 minutes early to complete security checks.  The tour building is just steps away from the MediaCityUK tram stop on the Eccles line from Manchester Piccadilly.  Whilst waiting for the tour to commence we looked round the foyer which contains a couple of Daleks used in the filming of some older Doctor Who episodes alongside a Tardis Police Box.

The tour got under way promptly and our two young male tour guides were both informative and friendly coping well with a wide age range from children to retired couples.  Walking down a corridor our tour guide pointed out the former Countdown clock from Channel 4 which has been located there since it stopped working and had to be replaced!  He explained that the BBC do not have sole use of the studios and their ‘competitors’ from ITV and Channel 4 also have a presence in the building.

Entering our first studio, an exact copy of the BBC Breakfast Studio we had a chance to read the news following the auto cues, learn about timings and hand overs then try our hand at presenting the weather forecast.  The studio is also used by BBC North West when the actual view from the window is visible, interestingly for the national coverage, a screen such as the one above is used to remove the local identity.  I found this strange as its common knowledge that BBC Breakfast is broadcast from Salford so why not let the viewers see it through the windows!

The next area we were invited to look round was the BBC Radio 6 Music studio, comprising a green room with sofas where radio guests can relax with a coffee before being interviewed on air.  Moving into the actual studio, our guides explained the production process of setting up a recording studio.  We were shown how presenters can just log into their personal profiles and their own jingles and playlists will appear on the screen ready for their live shows, it’s all so much easier nowadays with digital technology and everything being ready to go on air at the touch of a button!  Being a Saturday, Football Focus was being broadcast live from the studio upstairs whilst we were in the building.

Moving on, we were taken into a large sound studio used for radio productions.  Off to one side we looked in the ‘Dead Room’ which had pieces of foam stuck to the walls to deaden sound and cut out echoes.  The room is L shaped and when our guide walked from one end to the other still speaking to us, it was interesting to hear the distant sound effect it created.  The room is used for ‘outdoor’ scenes when there is no echo.  Back in the main sound studio we examined a large door with a lock and bolt which we tested by closing gently and then slamming for recording purposes.  Other sound techniques that were demonstrated included putting two pieces of Duplo into a glass to create the sound of ice being added to a drink, the banging together of two open coconut shells to simulate the sound of horses hooves and several pairs of plastic gloves tied together and shaken to imitate a flock of birds – all simple but effective!  There were also a couple of different sized sinks, turning on the taps of one sounded as if a shower was being used whilst the other had some crockery next to it, ready for when kitchen sink scenes were being recorded.  Our guide also pointed out a flight of steps leading nowhere that were used so that listeners could hear the footsteps and also the speaker disappearing into the distance exerting themselves in a realistic manner.  It was explained that although radio actors were able to read their lines, they needed to practise them in advance so that appropriate voice intonations were used.  I found the sound studio extremely interesting and learnt a great deal from my short time here.

Leaving this studio we were then taken out of doors to a studio block around the corner, this time to view the Blue Peter studio, home of the longest running children’s television programme in the world, first airing in 1958.  I used to watch it as a child, then again when my own children were small.  The magazine type format has remained the same but the presenters have come and gone over the years.  One thing that struck me was the small size of the studio, much smaller than it appears on television so if a large group of people are appearing then the Blue Peter garden out in the courtyard will often be used for filming.  As an alternative, some tour groups are shown around the Match of the Day Studio but this is unavailable at weekends as it is being prepared for the evening shows when highlights of the day’s top football matches are broadcast.

This concluded our tour which seemed to have gone by so quickly, it was so interesting to take a look behind the scenes and learn a little about the production process.  If you are planning a day out or weekend in Manchester and you are interested in media, it might be fun to take this tour.

57 thoughts on “The BBC MediaCityUK tour”