After a wonderful night’s sleep in our gorgeous room at the Hotel Indigo we popped downstairs to discover what was in store for us at breakfast.  This takes place in the light and airy Feasting Room where we found a huge refectory table laid out with a vast array of cold breakfast options.

We helped ourselves to bowls of fresh fruit and yoghurt and then ordered cooked breakfasts and cappuccinos at the table.  Both my eggs Benedict and my husband’s full English were cooked to perfection and after a second cup of coffee we were ready to face the day ahead.

It was a sunny morning so we decided to take a stroll along the riverside, just a few minutes walk from the hotel.  We followed a riverside path along the side of the Royal Shakespeare Theatre (RSC) passing Holy Trinity Church where both William Shakespeare and Anne Hathaway are laid to rest.

Just beyond the church we needed to leave the riverside for a short distance along Mill Lane before re-joining the path slightly further along.  Soon we came to a weir and a lock and beyond there a bridge which we crossed to reach the other bank.  We then returned to the scenic Bancroft Gardens in the centre of Stratford in good time to take a 30 minute boat trip with Avon Boating.

Pleasure boat cruises along the River Avon cost £8 and tickets can be bought on board.  It was such a pleasant morning to be on the river and we enjoyed the views as we sailed downstream past the RSC theatre and the church before turning round and continuing upstream passing under the 15th century arched Clopton Bridge.

Along this tranquil stretch of river we glimpsed secluded riverfront homes with their beautiful gardens leading down to the waterside.

Although no live commentary takes place, audio guides are available which provided us with an insight into points of interest as we passed by.  We found taking the boat trip a lovely way to spend some time as it was very relaxing and provided a different perspective of the town from the water.

Following our boat trip we wandered back through the town centre to visit Shakespeare’s School Room and Guildhall on Church Street.  The school is conveniently located opposite the Hotel Indigo where we were staying but we had been unable to visit there first as it does not open until 11.00 a.m.  Standard tickets £12.50.

Stepping indoors we discovered where Shakespeare was educated and sat at a desk in the very classroom where he was a pupil in the 1570’s.  Here, we participated in a Tudor schoolroom lesson that was led by a stern schoolmaster dressed in period robes.

It was both interesting and fun as I dipped my quill pen into an inkwell and engaged in some handwriting practice.  I’m not used to quill pens but do sometimes write with a fountain pen and to my delight was awarded an A* for my efforts!

We then moved into the Guildhall which has undergone major restoration work.  During these repairs a series of rare medieval wall paintings were unearthed that had been hidden for centuries.

There was much more to experience than I had expected and I would allow around 90 minutes for a visit as this engaging visitor experience includes two short films, interactive displays and knowledgeable guides.  There’s even an opportunity to dress up in the classroom if you wish.

Before lunch we headed to the Guild Chapel on the corner of Chapel and Church Street.  The church was constructed in the 13th century by the Guild of the Holy Cross, at that time a prominent social and religious organisation central to life in the town.  The chapel is noted for its rare medieval wall paintings which along with the adjacent school room have been rediscovered by the removal of layers of lime wash.

It was then time for a spot of lunch so we popped into The Coach House on Rother Street, an historic pub that has recently been refurbished.  The morning sunshine had sadly disappeared and it had turned chilly so rather than sitting out in the garden terrace we found a table indoors in the cosy snug.  We both ordered steak sandwiches with side salads which were extremely tasty filled with generous slices of medium rare beef that melted in our mouths.

After our relaxing lunch break we wandered back to the hotel to collect our luggage and say goodbye to the friendly front of house staff.  Our short break wasn’t quite over though as after packing up the car we drove the short distance to the British Motor Museum located 20 minutes away in Gaydon.  The museum is home to the world’s largest collection of historic British cars.  Admission £14.50 in advance or £16 on the day (tickets are valid for unlimited return visits within a 12 month period.

This vast museum is home to more than 400 British classic cars to celebrate the past, present and future of British motoring.  The collection tells the story of the motor car and over a hundred years of its industry in the West Midlands.  Free guided tours are available at certain times of day and either joining one of these or wandering around on your own it’s fascinating.

The museum is divided into two large buildings, the main one takes visitors through a series of displays each depicting aspects of British motoring history.  We began our self guided tour along the Time Road documenting a century of motoring history beginning in 1896 and telling the story of how motoring has changed over the years from the roads we use to the vehicles we travel in.  Fun facts include when Cat’s Eyes were first introduced and when the first driving test was taken.

The Design and Concepts section contains a unique display of prototype vehicles which never quite made it into production.  There’s also sports cars including models from Jaguar, Morgan, Lotus, Triumph, McLaren and Aston Martin.  The Land Rover display is dominated by a man made mountain designed to show off its off road capabilities.  Other displays include Royal cars, record breakers, film and TV vehicles and a period display of a 1930’s garage and the office of the car magnate William Morris.

Across the car park visitors also have access to the Collections Centre which houses approximately 200 vehicles from the reserve collection.  As this section is not technically a museum, the cars are arranged in rows with limited information about each vehicle.  It’s definitely worth visiting though with its displays including the first and last cars off the production lines and a wide selection of Jaguar and Daimler models.

From the upper floor visitors are able to look down from a viewing gallery to observe a behind the scenes insight into how the cars are stored and preserved, watching restoration work underway.

Visiting the British Motor Museum is a great day out for the entire family with children able to pick up a booklet and complete a Road Map Trail on their way around which is both fun and educational.  There’s so much to see that I’m sure I’ll be returning before too long to see more and as it’s so conveniently situated just one mile from Junction 12 of the M40 motorway.

That concluded our short break in beautiful Stratford and the surrounding area and what a lovely time we’d had following in the footsteps of Shakespeare, touring a distillery, taking a scenic boat trip on the River Avon, visiting a Butterfly Farm and rounding off our trip at the British Motor Museum.  Staying at the Hotel Indigo had been lovely too and couldn’t have been better placed as it was located in the heart of the town with its own car park.

During our stay we were guests of Hotel Indigo Stratford-upon-Avon and Shakespeare’s England and as always all views and opinions are entirely my own.

A day in Stroud, Gloucestershire 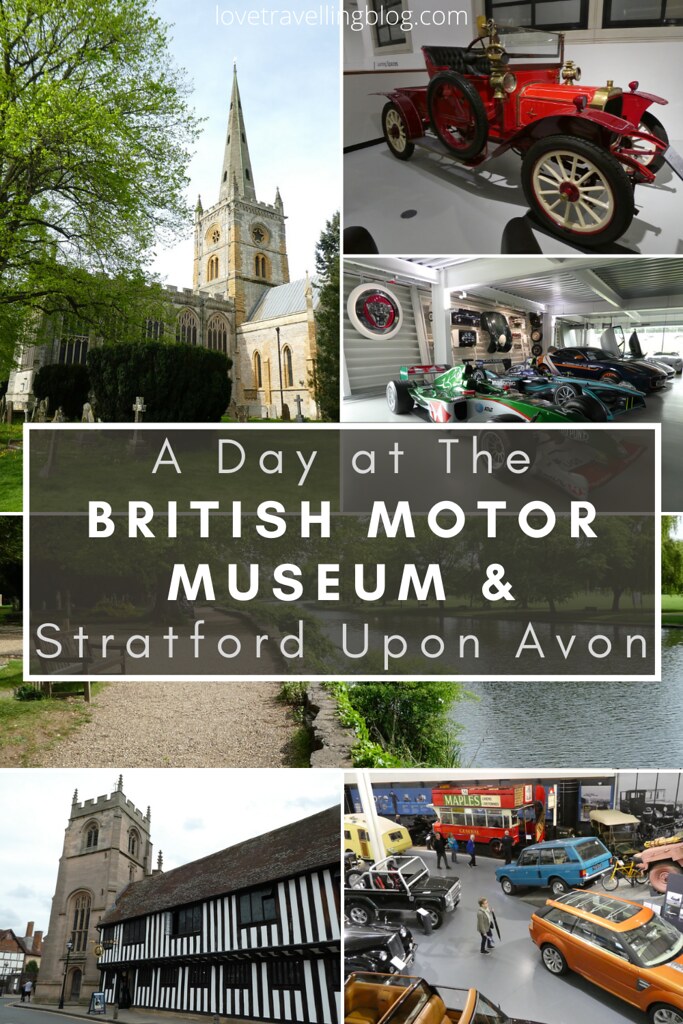 34 thoughts on “Day 2. Stratford-upon-Avon and the British Motor Museum”