We set off bright and early to make the most of our short break in the charming medieval market town of Stratford-upon-Avon, famous for the English poet and playwright William Shakespeare.  The town is located in rural Warwickshire, approximately 100 miles north west of London.

Our first stop was at the village of Shottery, home to Anne Hathaway’s Cottage.  Dating back more than 500 years this was the former home of William Shakespeare’s bride to be.  The cottage was extended over the years but much of the original structure survives to this day.  The property was purchased by the Shakespeare Birthplace Trust in 1892.

Tickets to Anne Hathaway’s cottage can be purchased separately at £15 or as part of a combined ticket to also include Shakespeare’s Birthplace and New Place in the town centre at £26.50.  We gathered in the garden for a short talk by one of the guides and then enjoyed taking a self guided tour of the house with its original furnishings and information boards telling the stories of the 13 generations of the family who lived there.  For once it was advantageous to be small as doorways were just 5’2″ in height so I was able to comfortably fit through without bending down.

The cottage is surrounded by a beautiful garden extending to nine acres with paths leading to a sculpture trail inspired by Shakespeare’s plays.  If you are already in Stratford and without your own transport the cottage is a pleasant 1.3 mile walk from the town centre, taking around 30 minutes.

Leaving there, we drove into the town centre and checked into the beautiful Hotel Indigo on Chapel Street which has its own car park to the rear of the property.

This boutique hotel lies directly opposite Shakespeare’s last home and is absolutely gorgeous with its decorative half timbered exterior encapsulating the charm of the Tudor period.

The newly refurbished hotel is a delightful mix of old and new blending together in perfect harmony.  After settling into our contemporary styled room and enjoying a light lunch in its secluded garden we set off to explore the beautiful town synonymous with William Shakespeare.

We didn’t have far to go as directly opposite the hotel stands Shakespeare’s New Place so we visited there first.  This was the site of Shakespeare’s family home for 19 years.  The house was demolished in 1759 and a garden has since been designed on the exact location where ‘New Place’ once stood to commemorate the importance of the site.  When Shakespeare lived there, the house was one of the largest in the town and an indoor exhibition creates an impression of the scale of the original building.

Wandering through its delightful gardens awash with spring blooms and specially commissioned artworks we learnt about the fascinating story of the house that’s no longer there.

Leaving there, we wandered along Stratford-upon-Avon’s quaint streets with their characteristic half timbered buildings now home to high class shops, cafes and restaurants.

Touring the house we learnt that his parents were wealthy enough to own the largest house on the street.  We viewed a replica of his father’s glove making workshop where he made gloves for all occasions from everyday working gloves to elaborate pairs worn on special occasions.  In 1568 his father John became mayor of Stratford and because of his status William was privileged to attend the local grammar school.  The house remained in the family until the late 18th century and was purchased by the Trust in 1847.  It has been well preserved and provides an insight into what the Bard’s early life may have been like.

Our visit them continued into the garden where resident actors occasionally bring Shakespeare’s works to life.  It was a real sun trap so we relaxed awhile on a bench whilst studying our map of the town planning where to head next.

We decided on a stroll by the riverside and paused to buy ice cream cones as it was such a lovely warm afternoon.  The Bancroft Gardens overlook the riverside and it really is a beautiful spot to come for a picnic.  The Bancroft canal basin lies at the heart of the historic town and is where the Stratford-upon-Avon canal joins the River Avon.  We wandered over the bridge watching both canal and pleasure boats pass by and a little further on came to the Stratford Butterfly Farm with standard admission £7.95.

On entering the tropical rainforest environment we encountered hundreds of the most beautiful exotic butterflies possible, all fluttering around us.  Whilst it is not permitted to touch any of the butterflies they often land on you as you walk around.

It really felt like a tropical paradise with its lush vegetation, waterfalls and koi carp filled pools.  I usually have little success taking photos of butterflies as they normally close their wings just as I am pressing the shutter.  However, here it was different and I managed to take numerous shots that I was pleased with.

As well as butterflies there are mini-beasts, reptiles, snakes and amphibians to be seen.  The discovery zone was particularly interesting as we could observe the life cycle of a butterfly and were able to see a butterfly hatch from its pupa.  I’d definitely recommend a visit to the Butterfly Farm as it’s an enchanting experience for both young and old.

It was then back to the hotel to collect our car for the short drive to Shakespeare Distillery located two miles outside the town centre.  The distillery was established in 2015 as an artisan spirit producer of a range of premium gins and rums.

We’d pre-booked a tour around the working distillery which began with an interesting short talk on the history of gin distilling in the United Kingdom.  We learnt that small batch distilling has flourished since 2009 when the law changed to allow alcohol to be distilled in small batches, replacing a 1751 act restricting production to large distilleries only.

Our tour then moved into the still room where we discovered how gin and rum are made and of the many different ingredients and botanicals used in the distilling process.  From there we were led into the bottling room where we were shown the automated process of affixing labels to full size bottles and how the labelling of miniatures is done by hand.

It was both an informative and fun tour as we were shown around by the staff themselves who were very knowledgeable and passionate about the distillery.  Our tour concluded in the tasting room where we were offered a selection of their award winning gins and rums to try.  Luckily for me, I wasn’t the one driving so I was able to participate in the tasting which concluded with either a gin or rum of our choice. The Stratford Dry and Rhubarb Gin were my favourites so I opted for the latter which was very refreshing, as the tartness of rhubarb was very tangy and less sweet than some other gins I have tasted.  Drivers did not miss out as they were offered generous sized miniature bottles to take back home with them so my husband selected the Jester spiced rum.  The distillery also runs gin schools and cocktail classes and is a great place to visit in the area.

We then returned to the hotel and I couldn’t wait to take my shoes off after walking around all day and relax on the huge bed with its stylish grey, yellow and blue chequered headboard.  The large wardrobe opened to reveal a fridge filled with complimentary bottles of water, soft drinks and milk for our tea.  There was even complimentary popcorn for film watching on our large television.  After luxuriating in the sophisticated bathroom with its bold designed blue and white tiling we went downstairs to enjoy a meal in the Woodsman Restaurant.

We’d read that the restaurant was awarded Best New U.K. restaurant in the Good Food Guide 2020 so thought we’d be in for a treat.  The restaurant is divided into intimate areas and has a relaxed vibe.  From our table we were able to watch the chefs prepare food on the sizzling grill and in the wood fired oven.  As it was a Sunday mouth-watering roasts were on the menu and we can never pass up on a roast.  After our delicious starters, our mains arrived on a sharing platter with succulent beef, pork and huge Yorkshire puddings accompanied with fresh vegetables and a delicious gravy.

After being unable to resist the delectable selection of desserts we returned to our gorgeous room and were asleep in seconds tucked under the duvet of our extremely comfortable bed looking forward to our next day in Stratford. 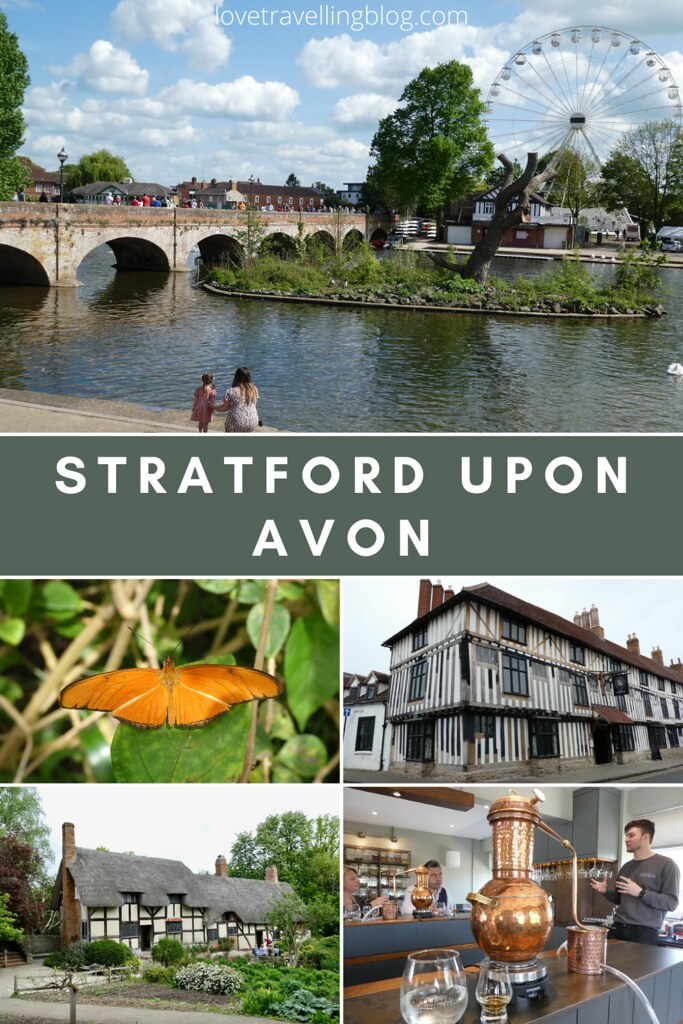 87 thoughts on “Day 1. A weekend in Stratford-upon-Avon”