We began the day with a walk around some of the buildings of the University of Edinburgh starting at the Old College quad located on South Bridge.  It was an overcast morning but the sight of the historic buildings housing the School of Law and the Talbot Rice Gallery surrounding the quad lifted our spirits.

From there, we continued on to the main campus where we admired the elegant McEwan Hall in Bristo Square.  It’s a magnificent ceremonial hall and we have fond memories of attending a family graduation ceremony there not so long ago.  At right angles to the hall stands another fine building, that of Teviot Row House which is the oldest student union building in the world, having been open since 1889.

It was approaching the time for our pre-arranged entry to the National Museum of Scotland on nearby Chambers Street near the George V Bridge.  Entrance is free to this ‘must see’ museum with its grand central hall of cast iron construction that rises up to the full height of this light filled building.

This vast museum’s galleries cover Scottish antiquities, history, science, technology, geology, archaeology and natural history.  One of the most notable exhibits is the stuffed body of Dolly the Sheep, the first successful cloning of a mammal from an adult cell.

Exhibits also include a 19th century lighthouse lens and a display of historic aircraft and vehicles in the Transport Hall.  It’s a wonderful museum and a perfect place to travel back in time through Scottish history.

On leaving the museum it was just a quick walk around the corner to take a look at the statue of Greyfriars Bobby on Candlemaker Row.

This Skye Terrier became known for spending 14 years guarding the grave of his owner until his death in 1872.  The best known version of the story is that Bobby belonged to John Gray who worked for the police as a night watchman.  When his master died and was buried in Greyfriars Kirkyard he spent the rest of his live at his master’s side.

We then caught a No.41 bus from along the road to take us to the pretty village of Cramond (£4.50 for an all day ticket on Lothian Buses).  Cramond lies on the south shore of the River Forth, four miles north west of the city centre.  We alighted the bus near Four-a-Far Mill so that we could walk into the village centre along the Almond River Walkway.

This attractive riverside walk follows the course of the River Almond through woodland glades, passing the Cramond Boat Club and along to the pretty little harbour at the mouth of the river.  The harbour is home to a number of yachts and the Cramond Inn where we had hoped to have lunch, but it was unfortunately closed.

The village is full of old world charm with its white washed cottages along the quayside and in the nicest possible way, it doesn’t look as if it has changed much over the years.

If the tide is out it’s possible to walk out along the causeway to Cramond Island, a tidal island on the Firth of Forth.  There is a notice-board on the quayside stating the times when it may safely be crossed to avoid becoming stranded on the island by the incoming tide.  On the day of our visit the accessible times were 6.20 a.m. or during the evening so we were out of luck, but we did walk out along the jetty as far as we could to see the causeway submerged in water.

The imposing concrete teeth alongside the length of the causeway are military in origin and intended to ensure that small boats could not pass south of the island at high tide.  The island is just over a third of a mile long and is owned by the Dalmeny Estate, although it remains uninhabited.

We wandered uphill to the edge of the village passing Cramond Kirk on our left and returned to the city centre from a bus stop on the main road.  As the bus was going via The Meadows we decided to get off there and take a walk through Bruntsfield, one of the Edinburgh districts made famous through the 44 Scotland Street books by Alexander McCall Smith, of which I’m a great fan.

Our stroll took us across Bruntsfield Links which is one of Scotland’s very few free public golf courses.  The immaculately maintained course has a backdrop of the volcanic Arthur’s Seat hilltop and an attractive setting for a round of golf.

Visitors can either bring their own clubs with them or rent a set for £5 from the Golf Tavern overlooking the course.  The course is currently closed so it’s best to check their website if you are thinking of having a game.

After returning to the Altido Vita aparthotel for a well earned rest, we made good use of our Lothian bus day tickets and ventured out again, this time to the historic harbour village of Newhaven which lies approximately two miles north of the city centre.  It’s a very pretty spot and perfect for an early evening stroll with its tall white lighthouse, which is no longer in use.

Overlooking the small harbour is the old Victorian Fish Market, a long red building at the side of the harbour which has now been converted into a smaller fish market, a Loch Fyne restaurant and a takeaway which has terrace seating to enjoy freshly cooked fish and chips.

Work is ongoing to build a new tramline due to open in 2023 of which Newhaven will be the terminus station, connecting to the existing line into the city centre.  This will make the village easier to reach and should benefit the local businesses enormously.

From there we continued on foot to the scenic Leith waterfront with its mix of small independent shops, micro-breweries and restaurants.  Leith was one of Scotland’s major ports and historically a place of industry from glass production to ship building.  When Scotland no longer needed the port, Leith started to go downhill but in recent years it has been on the rise and has now become a vibrant part of the city and even been described as Edinburgh’s coolest neighbourhood.

The promenade known as The Shore, has its own charm and is a great place to relax at one of its restaurants or gastropubs, especially when the weather’s good and it’s possible to eat out on one of the terraces enjoying the stunning views across to Fife.  As with its neighbour Newhaven, Leith will be so much easier to reach from the city centre once the tram line is complete rather than having to catch a bus or face a lengthy walk.  We ate in one of the local pubs and settled on the Scottish delicacy of haggis, neeps and tatties (swede and potatoes to the uninitiated), served with whisky sauce which was very tasty. 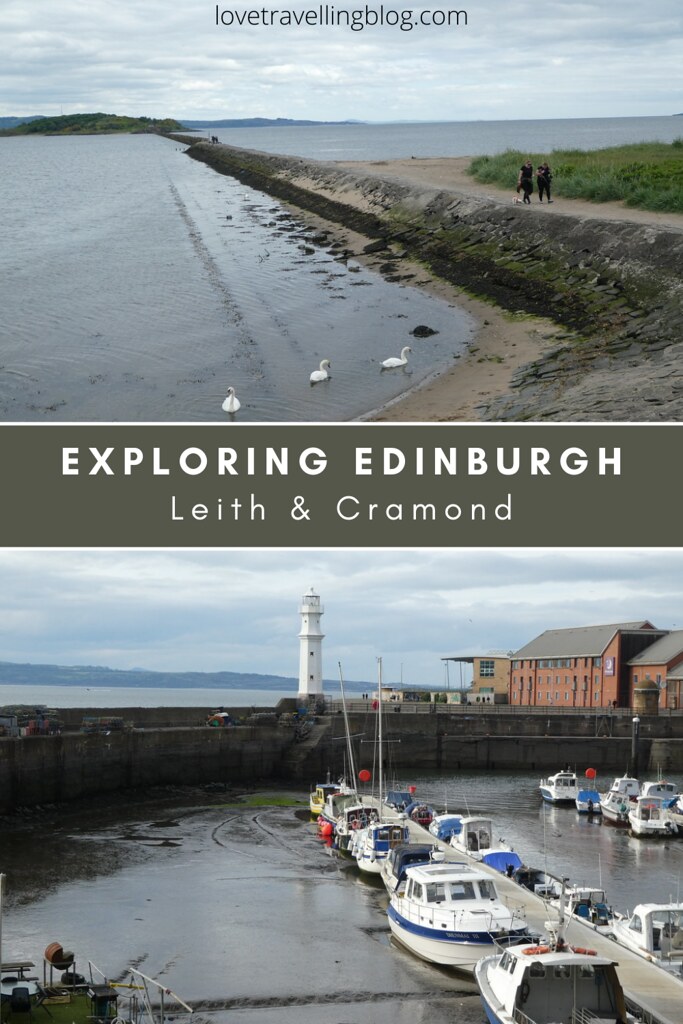