After spending the previous day visiting Sudeley Castle and nearby Winchcombe we moved our focus onto the Regency spa town of Cheltenham where we were staying.  After breakfast we headed over to The Bicycle Hub  located at Cheltenham Spa railway station where we’d arranged the hire of e-bikes so that we could take the Regency Cheltenham Cycle Trail.

After being equipped with helmets and been shown how to operate the e-bikes we had a quick practice ride around the car park and then, feeling confident we were ready to go.  The Bicycle Hub have worked with tour company Compass Holidays to create a phone app with several trails so we downloaded this to follow the six mile route around Cheltenham.

The cycle trail takes in many of Cheltenham’s landmarks and mostly follows the route of an old railway, The Honeybourne Line and is relatively flat.  Both e-bikes and bicycles can be hired out for part or whole days and as locks are provided, it’s easy to stop off where you wish and explore at your own pace.  We thought that it would be the best of both worlds to cycle round following the trail, stopping briefly to take photos and then to return to some of the landmarks later in the day on foot.

Riding an e-bike is a pleasurable experience as you can exert as much energy as you wish or let the bike take the strain.  The trail took us through Pittville Park passing the Pump Room and then later into Sandford Park where we paused to admire its stunning flower bed displays.

The trail returns through the town centre along the fashionable Promenade with its Regency buildings and gardens.  As most of the route is off-road it’s suitable for the whole family and we thought it was a fun way to experience all that Cheltenham has to offer in a relatively short period of time.

After returning the e-bikes back to the station we returned to the centre for a leisurely stroll along the tree lined Promenade.  This beautiful boulevard dates back to 1818 at the height of the Regency period and is home to some grand buildings, high class shops, cafes and restaurants.

The Long Gardens run alongside the Promenade and are laid out with ornamental flower beds, statues and at one end an opulent fountain.  The Neptune Fountain outside the municipal buildings depicts the Roman God of the Sea, Neptune and is surrounded by mythical sea creatures.  It is thought to have been modelled on the Trevi Fountain in Rome but has never been proven, nevertheless it is stunning and should not be missed.

The Promenade leads onto the Montpellier Quarter, one of the most desirable parts of the town with its attractive gardens, stunning architecture, designer shopping and dining options.  Montpellier was created by two gentlemen in the 19th century as a retreat from hectic town centre life.

Along Montpellier Walk there are 32 caryatids (draped female figures) based on those found in the Acropolis in Athens.  Each figure balances an elaborate cornice on her head, functioning as exquisite structural supports between the buildings.

Across the road lie the Montpellier Gardens which were laid out in 1809.  The expansive lawns are frequently a base for local festivals which take place regularly during the year.  A cafe, the Garden’s Gallery (an exhibition space for local artists) and a bandstand are to be found at the far side of the gardens.

The Imperial Gardens, Cheltenham’s former pleasure gardens are located close by and feature a statue of the local born composer Gustav Holst whose birthplace museum we were on our way to.

Cheltenham Town Hall sits to one side of the gardens.  Unlike most other town halls it was built as a venue for social events and is not the council offices.  The main entrance to the building faces a row of Regency town houses along the main road.

Our stroll led us back to the Promenade and onto Regent Street which has a continental feel with its outdoor dining terraces in front of handsome period properties.  Restaurants and shops along here are nearly all independently owned and being a cheese lover I just had to pop into The Cheeseworks.  It’s also home to Woodkraft, an artisan eatery run by Masterchef champion Simon Wood.

After a relaxing lunch we continued on foot to the Holst Birthplace Museum on the edge of Pittville Park.  The museum is currently open Wednesday, Thursday and Saturday with standard admission £7.

Gustav Holst is a famous British composer, noted for his composition of The Planets.  He was born in the house which now acts as the museum in 1874.  Holst spent his early years in Cheltenham before moving to London to study at the Royal College of Music.

The Music Room on the ground floor contains the piano on which he composed The Planets, manuscripts, music scores and recordings of excerpts of his music which can be listened to at the press of a button.  There’s also a small cinema room upstairs running a 25 minute video of his life and music.

It’s a small museum run by enthusiastic volunteers who are very welcoming and helpful explaining things.  As the house is a time capsule of 19th century life and includes a Regency period sitting room, bedroom, nursery, working kitchen and scullery I believe that it would be of interest to most people even if they are not classical music enthusiasts.

Leaving the museum we had reached the entrance gates to Pittville Park through which we had cycled earlier in the day.  This part of Cheltenham is known as Pittville and was created by Joseph Pitt (1759-1842) who invested the profits from his legal practice into the building of a 100 acre park estate lined with Regency houses.  The park was laid out in 1827 with the magnificent Pump Room being completed three years later.  Since 1890 both the Park and Pump Room have been owned by the council.

The park is a very pleasant place for a gentle stroll or to enjoy a picnic.  It is divided in two by Evesham Road with the eastern side overlooking a lake and the Pump Room.  On the afternoon of our visit we were unable to go inside as private function was taking place but normally it’s possible to look around and to visit its tea rooms.

We continued onto the western side of the park which is home to the lower lake.  There’s a very attractive Boathouse located on the lakeside which serves as a cafe with an outdoor terrace and also as the place to hire rowing boats from.

As we’d cycled and walked so much during the day, rather than walking all the way back into the town centre we caught a bus from the edge of the park then after a rest back at the hotel we enjoyed a relaxing meal in the Brewery Quarter.  The perfect end to our weekend in the beautiful Regency spa town of Cheltenham.

Our weekend in Cheltenham was supported by Visit Cheltenham and as always all views and opinions are entirely my own. 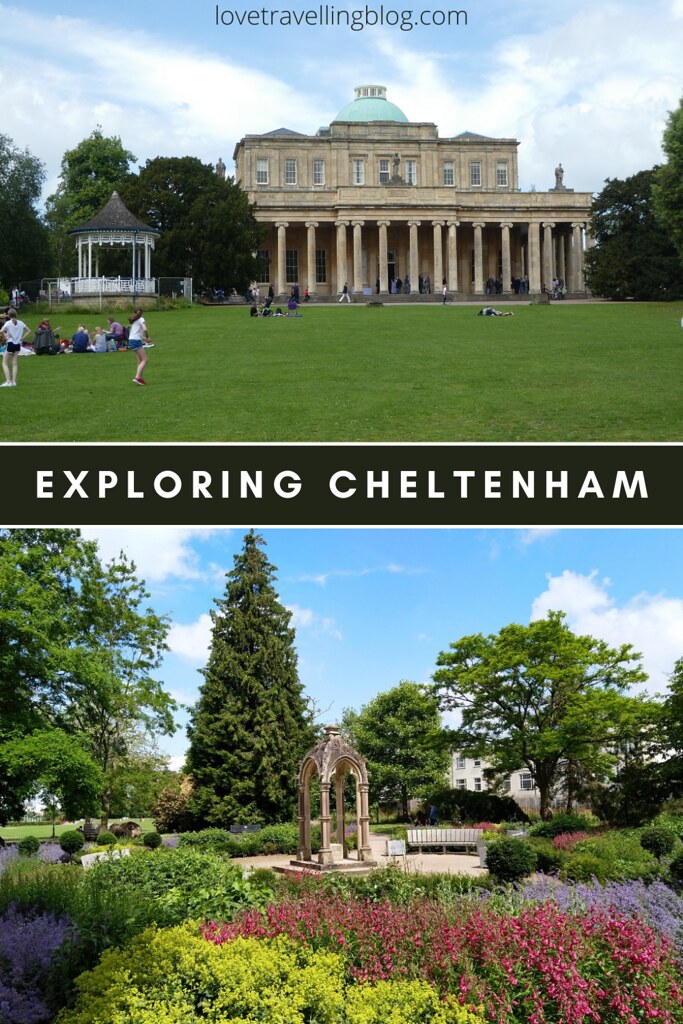