We had slept for almost 11 hours managing to catch up on the lost sleep from our overnight flight.  We woke refreshed at 8.00 a.m. and then enjoyed a long, relaxing breakfast on the terrace of the hotel’s Al Terrace restaurant enjoying the gentle breeze.  I started the day with a glass of freshly squeezed watermelon juice before moving on to some fresh fruit, cheese, olives and yoghurt.  From the egg station we both ordered freshly made fluffy omelettes whilst chatting to the chef who told us he was from Kazakhstan.  Over a large cappuccino, I browsed the morning copy of the Gulf Times, printed on shiny paper presumably so that in the heat the ink would not come off on your fingers.

It was interesting watching the comings and goings down below in the Souq including a local primary school group who appeared to be on an outing.  It was almost 10.30 a.m. before we raised the energy to move on and prepare for a fun day of sightseeing.

There was no shade as we made our way in the searing temperatures to the nearest metro station located just under 15 minutes away at Msheireb.  Since our last visit to Doha, the Red Line of the metro system is now open but as yet not serving all the stations on the line.  The spacious ticket hall was sparkling clean with attractive decor, the only thing missing seemed to be passengers but I’m sure more people will start using the underground trains when additional stations become operational, enabling commuters to get around the city more easily.

We attempted to buy two one day tickets from a machine at QR 6 (£1.28) each, paying for them by credit card.  After entering our PIN the transaction said approved and we followed instructions on the screen to remove the card but sadly no receipt or tickets were forthcoming.  Fortunately, a member of staff was on hand so we explained the situation to him and after confirming the transaction via our bank app using the metro’s free Wi-Fi, we received an apology and were manually given replacement tickets.

Finally, on our way, we took the escalator down to the platform level which was also devoid of activity (there seemed more staff in uniforms than passengers!).  The Doha metro has three separate seating zones – Gold, for passengers willing to pay a premium rate of QR 20 for a day ticket and a more luxurious experience – Standard and Family.  All the carriages were beautifully upholstered with signage and announcements in English making the system easy to navigate.

Our first stop of the day was at the Corniche and from there we connected to the waterfront through a flower adorned tunnel which appeared to have been recently planted.

Our stroll took us along the seafront promenade as far as West Bay with its futuristic high rise buildings that we had seen across the water from Souq Waqif.  The flat calm Persian Gulf of the previous day had given way to a decidedly choppy sea and the strong breeze caused me to carry my sun hat as it was in danger of blowing off.  The large waves were vigorously rocking the Dhows from side to side that were tied to their moorings along the quay.

After walking quite a distance we managed to cross the busy Corniche highway at a set of traffic lights, then made use of our phone map to find our way inland to the City Center Mall.  As we approached, a very strange thing happened – it started to pour with rain, with leaden skies and streaks of lightning appearing in the distance.

On average, it only rains in Qatar approximately nine days a year and unlike any of the local residents, I was prepared as I always carry a small umbrella in my bag so we huddled under this together.  Within minutes the roads were awash with water and huge puddles were forming due to the lack of drains.  Most people were either sheltering in doorways or gazing out of office windows at the unusual occurrence but we plodded on with my open toed sandals getting soaked with the localised flooding.

We took refuge in the shopping mall awhile but it wasn’t anything special and I wouldn’t recommend visiting unless like us, you happened to be in the vicinity.  It did have one unusual feature and that was an ice rink in the basement which was visible from all floors.

It was still raining heavily when we returned outside so we hurried along to the nearby DECC (Doha Exhibition and Convention Center) metro station.  The deluge continued and passers by continued to look in awe at our ‘must have’ umbrella accessory.  Our plan was to visit the Katara Cultural Village but as its station had not yet opened, we travelled to Al Qassar which was not far away.

Arriving at the station we followed some temporary signs for Katara and were pleasantly surprised to be able to take advantage of a free shuttle service by golf cart that was still operating despite the wet weather.  We shared the electric car with two other people and the driver had to dodge around the huge puddles on our way to the cultural village.

Conditions were even worse there as the pathways and narrow roads connecting the various buildings of the cultural village had, without exaggeration, turned into rushing streams. Workmen sporting cagoules and equipped with small sweeping brushes were trying their utmost to divert the water into the few available drains.

We had hoped to take a stroll by the beach but red flags were flying and the entire area was cordoned off, I can’t imagine that happening very often.  Curtailing our visit, we wandered past the Pigeon Towers and viewed the auditorium and mosque before flagging down another club car to take us to the Galeries Lafayette mall on the edge of the village.  This had recently opened and we appeared to be the only visitors but that could have been partially because of the inclement weather and that it was a Sunday which is a working day in the Middle East.  The mall screamed opulence and was filled with high end retailers such as Armani and Gucci but was desperately in need of a few customers. 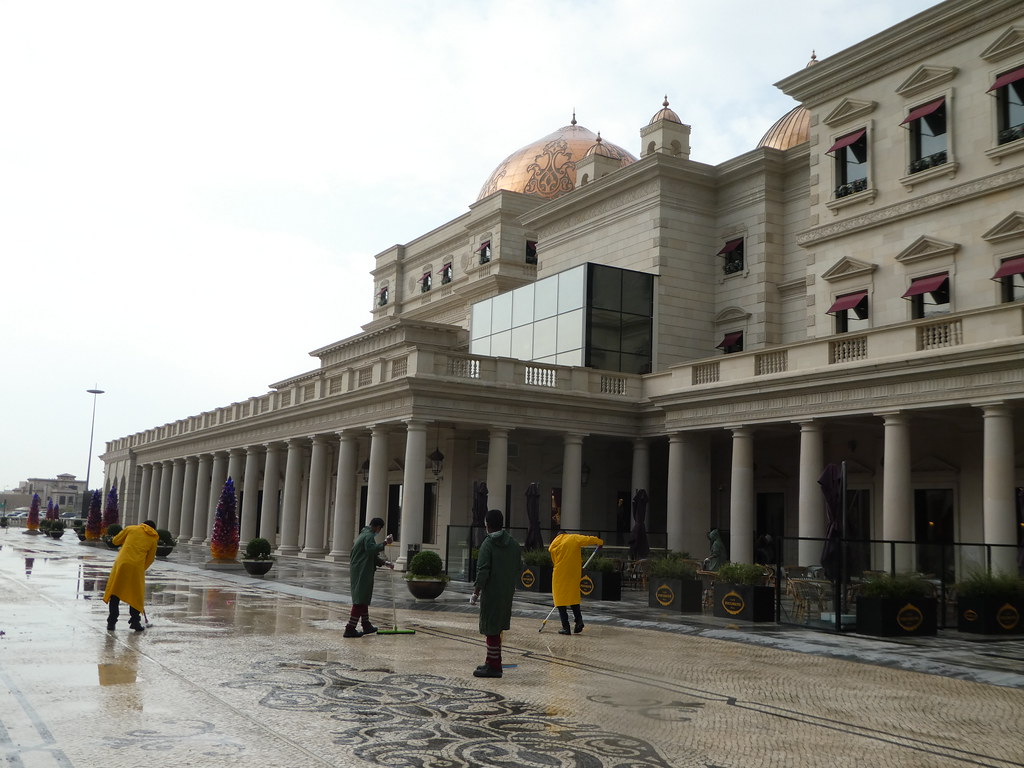 Flooding outside the Galeries Lafayette Mall at the Katara Cultural Village

Standing in one of its doorways we made use of the free Wi-Fi to order an Uber to the Venetian district of The Pearl.  Our taxi came within a few minutes and cost QR 8.09 (£1.72).  Thankfully the rain had eased though it was still rather gloomy as we wandered alongside the re-created Venetian canal with its replica Rialto Bridge.  The pastel coloured apartments looked very attractive and the canal bank had several inviting cafes which all seemed very quiet.  More construction work was underway to develop the area further and it looked an appealing but undoubtedly expensive place to live for the expat community working in Qatar.

Our stroll continued to Porto Arabia, a large marina filled with expensive yachts and surrounded by high end stores and upscale restaurants.

After taking in the views we managed to access a weak connection to The Pearl Free Wi-Fi and organised an Uber back to the Al Qassar metro station which took 7 minutes and cost QR 10.67 (£2.27).  Trains on the Red Line run at ten minute intervals and we made good use of our day pass by returning to Msheireb station, this time sharing the carriage with several other passengers.  On leaving the station we took a free shuttle bus service to Souq Waqif which was running temporarily until its own metro station opens.

Back at our hotel we enjoyed several cups of Arabic coffee accompanied by a dish of dates in the hotel lobby and then relaxed in the sauna and steam room.  We had reserved places on the hotel’s free walking tour at 8.00 p.m. from one of its sister hotels so had a nice ride over there in the club car.  There were nine guests on the tour, 2 from the US, one Filipino, 4 Indians and ourselves.  The walk commenced with a tour of the Falcon Souq and its adjoining Falcon hospital which was extremely interesting.

From there, we moved on to a small community centre for Qatari men where we were offered cups of Arabic coffee.  It was then off to the Royal stables where we admired the horses of the royal household and finally there was just enough time for a short stroll through the spice and textile souks before returning to our starting point.

This free walking tour which is offered daily by the Souq Waqif Boutique is not to be missed as it introduces guests to parts of the Souq that they would be unlikely to come across whilst wandering around themselves.

It was after 10.00 p.m. by the time we were eating dinner on the terrace of a Lebanese restaurant on the edge of the Souq.  It was fortunate that we were feeling hungry as the delicately spiced dishes were of a generous size and tasted delicious.  The end of a very interesting and unusually wet day in Doha.