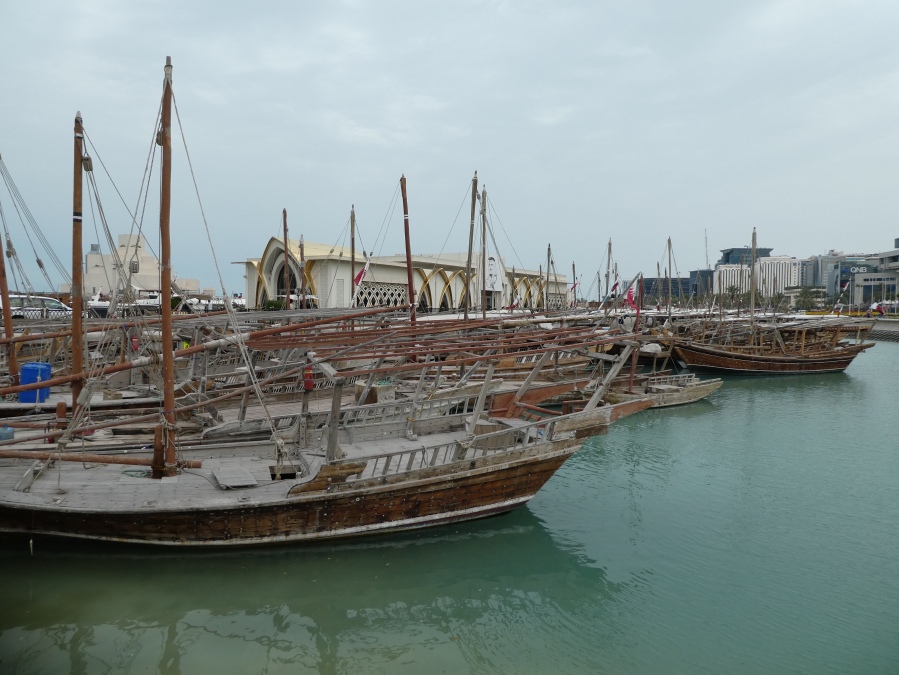 We had slept like logs in our extremely comfortable bed and ignored the phone alarm at 7.00 a.m. preferring an extra hour in bed.  Finally raising the energy to get up I was brought back to life in the shower which probably had the largest monsoon head that I had ever seen and I lingered under the running water pampering myself with the luxurious complimentary toiletries.

Finally ready for our breakfast, we dialled 0 on our room phone and almost as soon as we had taken the lift downstairs a club car was waiting to drive us over to the Al Terrace restaurant at the Mirqab Hotel.  This was the furthest distance from our own hotel and it was so interesting to view the Souk in daylight as it was stirring to life.

Breakfast is excluded from the Discover Qatar package but at QR 50 (£10.50) offers good value and ensures an excellent start to the day.  Guests can either dine indoors or out on the terrace where we decided to sit.

A waiter served freshly squeezed juice and my apple, beetroot and carrot combination was so refreshing that I was soon requesting a second glass.  A chef was preparing hot dishes on the terrace and our omelettes were freshly prepared and cooked to perfection.  Popping indoors, we helped ourselves to bowls of fresh fruit, yoghurt and olives with our waiter keeping us supplied with our favourite cappuccinos.  Noticing waffles being delivered to another table we couldn’t resist ordering some for ourselves and these tasted divine spread with lashings of maple syrup.

Our huge breakfast had set us up nicely for a full day’s sightseeing and before taking the club car back to our hotel we took the lift to the top floor to take a look at the rooftop pool which looked very inviting.  Unlocking our room door we discovered that it had already been cleaned whilst we were eating breakfast.  After applying sun screen and taking bottled water from the fridge we were ready for a walk around the souq (standing market).

Opposite the Musheireb Hotel lies the camel souk which was interesting but a bit smelly.  From there we explored the maze of narrow alleyways admiring brightly patterned rugs in the textile souk.

Around the next corner we found ourselves in the bird souk which also included adorable small rabbits.  As it was a Saturday, locals were out enjoying the second day of their weekend and the narrow streets were buzzing with activity.  We glanced inside the Islamic Arts Centre which was a luxurious arts and crafts gallery where we watched artisans working on their paintings and pottery.

Leaving the souq we crossed some busy roads to take a look in the Islamic Cultural Centre, a place where one can learn about the Islamic faith.  Our morning stroll then took us along the Corniche (the 4 mile (7 km) seafront promenade) continuing all the way around the traditional dhow harbour which was filled with elaborate large dhows, some of which were having coats of varnish applied to their woodwork.

Qatar prides itself as the Pearl of the Gulf and we stopped to take photos of its huge pearl and oyster fountain which pays tribute to its pearl and diving industry.  From there we had splendid views across the water of the West Bay skyline with its huge skyscrapers.  Numerous dhow tour boats were moored along the quayside and we were continually being stopped and offered boat trips around the bay, the price decreasing each time we said we weren’t interested.

We were happy walking around and didn’t think we would see more from a short boat trip but if you might be interested to take one they seemed to average QR100 (£21) for two people.  Few other people were around but I presume lower rates could be negotiated for larger groups or if more people wanted to take a boat trip at the same time.

On the south side of the corniche lies the Museum of Islamic Art.  It’s located in MIA Park on a man made island 60m from the shore, approached by a grand, palm-tree lined driveway.  The museum is shaped like a post-modern fortress designed to conserve energy.

Entrance to the museum is free and visitors are required to dress modestly.  Spread over three floors it contains one of the world’s greatest collections of Islamic Art including metalwork, ceramics, textiles, coins and glass.  After exploring some of the galleries we sat in the cafe awhile which has large windows overlooking the bay.  When we had finished sipping our drinks we stepped out onto the beautiful terrace and admired the stunning views.

Leaving the museum we tried to book an Uber over to the Grand Mosque but as we were unable to connect to the Wi-Fi outside the museum we took a standard blue and turquoise metered taxi instead.  The driver advised us that it wouldn’t be more than QAR20 (£4.20) and was in fact only QAR14.60 (£3.20).  The Grand Mosque is located on Al Muhandiseen Street about a ten minute drive from the Museum of Islamic Art.

This is the largest mosque in Qatar, completed in 2013 and boasts 90 domes, 18 entrances and a capacity for 30,000 people.  The interior is only accessible to Muslims but is well worth a visit to walk through its elaborate outer areas adorned with marble archways.  We had arrived just after prayers had finished and were allowed to peer into the main prayer room which was very grand with large marble pillars.  Photography is not permitted indoors so I am unable to let you see its beauty.

After we had finished looking around the mosque we tried in vain to get a taxi so instead decided to walk over to the business district of West Bay.

This was actually much further than it looked but eventually we arrived.  Most of the buildings are government offices and after admiring the modern architecture we looked around the City Center Mall where we paused for a much needed rest and some cold drinks.  It was surprising to find a large ice rink on the ground floor of the mall surrounded by shops.

We returned to our hotel at around 5.00 p.m. and had a rest before taking the club car over to the Arumaila Hotel at 7.45 p.m. as we had reserved places on the hotel’s complimentary walking tour around the souq.

Whilst waiting for everyone to gather we were offered Arabic coffee and dates and when all nine guests were present we set off, making our first stop in the textile souq where we were shown some hand woven and mass produced rugs.

Moving on, our next stop was at the camel souk where our guide actually led us into the pen so that we could get up close to the camels who were now wearing coats to keep them warm.

Our tour continued on the theme of animals with a visit to the Royal Stables where we saw some Arabian horses.  We learnt that these animals are taken to the Royal Palace early each morning.

From the stables it was just a short walk over to the Souq Waqif Falcon Hospital and Medical Museum.  It was explained that falcons are such prized possessions in Qatar that every small village has its own falcon hospital.  Adjacent to the hospital we visited a falconry centre where birds could be purchased and taken for training – it was all very interesting.

Next, we were taken to a small community centre where we were served hot drinks and offered cake.

In a larger building nearby we watched some local men playing the board game Dama which is a traditional Qatari strategy game having similarities to Chess and Draughts.  We discovered that Dama has been played in the region since ancient times holding a special place in Qatar’s local culture and history.

Whilst there, we were by chance introduced to the Qatari minister for Culture and Sport and he suggested a group photo of us all as souvenirs of our visit.  We thought that this was particularly apt given that Qatar are hosting the football World Cup in 2022.

Our walking tour then ended at the Spice Souq where huge sacks of brightly coloured spices were piled high leaving a fragrant aroma in the air.

Our tour ended at 9.40 p.m. and had been so interesting as we were taken to so many places that we wouldn’t have otherwise gone to and we learnt so much about the Qatari culture and way of life.  If you plan to take the Discover Qatar Stopover Programme and choose to stay in the authentic Souq Waqif, I highly recommend taking this free tour run by the Souq Waqif Boutique Hotel.

We then enjoyed a late evening meal on the terrace of an Iraqi restaurant.  Here we shared chicken biryani and lamb kebabs served with vegetables, rice and a basket of flatbread.  The large portions were subtly spiced and tasted delicious – a perfect end to such a memorable day exploring beautiful Doha.