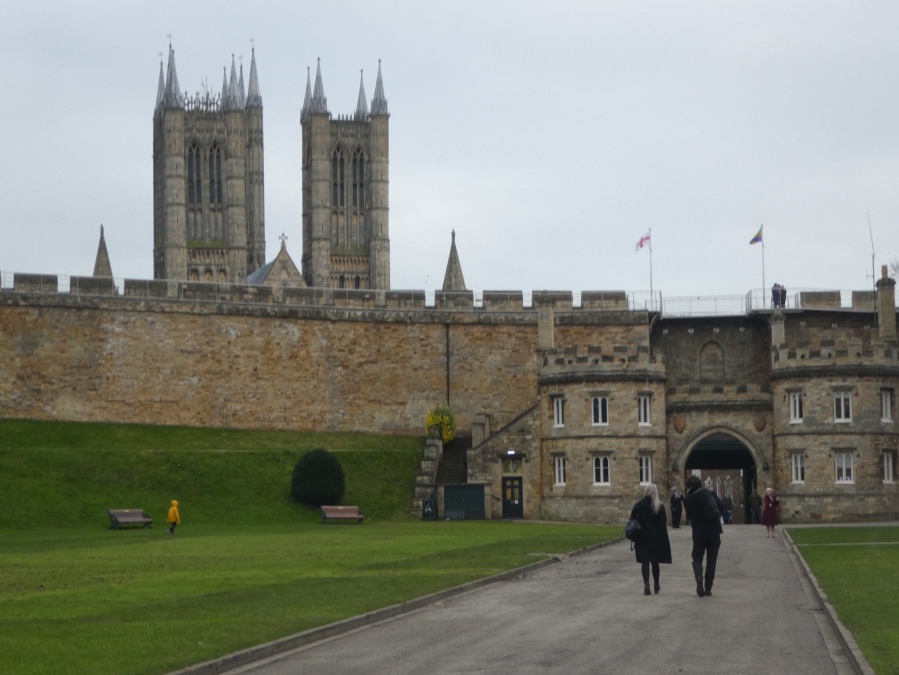 After starting the day with a delicious cooked breakfast at The White Hart Hotel we returned to the Cathedral as there hadn’t been much time to look around the previous evening when we were attending Evensong.  Standard adult admission to Lincoln Cathedral is £8 and this includes an optional introductory floor tour but as we had arranged to take the 90 minute roof tour starting a little later we decided to pick up a map and explore the Cathedral by ourselves.

Lincoln Cathedral dates from 1073 and is regarded as one of the finest examples of Gothic architecture in the British Isles.  The impressive nave fills a vast area and is adorned by splendid stained glass windows.

Temporary seating was in the process of being removed from the Nave as on the previous two days the Cathedral had been the venue for Lincoln University’s graduation ceremony.  It is hard to think of a more beautiful place to celebrate academic success.

Continuing our self guided tour, we moved on to St. Hugh’s Choir where we had attended Evensong the previous evening which feels so large that it’s almost like a church within a church.  Following our small map, we strolled through the atmospheric cloisters and along to the magnificent Chapter House. Some of you may possibly recognise the cloisters and Chapter House as they were used for the filming of the Da Vinci Code.

Our leaflet suggested we look out for the famous Lincoln Imp, which took some finding but we eventually tracked it down, perched high in the Angel Choir overlooking St. Hugh’s shrine.  Legend has it that he was turned to stone by angels because of the mayhem he caused throughout the Cathedral.  The Imp is now the symbol of Lincoln and the emblem of the Lincoln City football team.  The interior of the Cathedral is truly awe-inspiring and a definite must see when visiting the city.

Soon, it was time for us to return to the information desk near the entrance to collect our lanyards and assemble for our 90 minute roof tour.  I did wonder whatever we would find to look at for such a long time, but I was totally captivated throughout the tour and the time just flew by.  Our volunteer guide was absolutely wonderful taking us up into the roof space where he unlocked large oak doors and led us into a series of hidden chambers that once formed the old bishops castle.  Our small group continued along narrow passages held up by ancient beams and wooden trusses that in medieval times had once been part of Sherwood Forest.

There were quite a lot of steps to climb but these were easily manageable as we stopped frequently to go into small rooms and learn their history.  Viewing the Bell Ringing Chamber was particularly interesting and to discover that the Cathedral bells are still rung on a regular basis by 12 bell ringers known as the Company of Ringers.  To access the Bell Ringing Chamber they have to climb 127 steps and then stand in a circle to ring the 12 bells holding on to the woollen handles of the bell ropes known as sallies.

Timed to perfection, we were escorted outdoors onto the Cathedral rooftop with just two minutes to spare before the large bell, Great Tom struck 12.00 noon.  Despite it being a gloomy day, there were some good views to be had from this vantage point, I just wished I hadn’t left my woolly hat in the hotel as there was quite a cold wind blowing up there.

Leaving one of the best views until the end of the tour, we were guided across a raised walkway over the Cathedral for the most spectacular aerial view of the Nave.  Taking the tour cost only £5 and we were all in agreement that it was money well spent uncovering the hidden gems in the Cathedral roof.

Before heading off for some lunch we took the opportunity of strolling around the outside of the Cathedral admiring its beautiful Gothic architecture and flying buttresses overlooking Cathedral Green.  All those steps had given us an appetite for some lunch and we didn’t have far to walk until we came across the delightful Stokes Lawn Cafe located in the cookhouse of the city’s former Lunatic Asylum which has been tastefully converted into a cafe and coffee roasting house.

Sofas and chairs are upholstered using their own coffee bags whilst up-cycled items from the former hospital adorn its walls.  Continuing the up-cycled theme, a killer whale made from old car bumpers and coffee machine parts appears to swim from the ceiling looking down on us whilst we tucked into steaming bowls of broccoli and Stilton soup and tuna sandwiches.

Stokes is a family run local business which has been in existence for more than a hundred years and glancing through the glass doors to the rear of the cafe we were able to see where the coffee blending, roasting and packaging takes place.  Being coffee lovers we couldn’t leave before tasting one of their blends which was so smooth it left us wanting more.

After our lunchtime rest, we literally just had to just cross the road to visit Lincoln Castle, which was built by order of William the Conqueror during the late 11th century.  Entrance to the castle is £14 but substantial savings can be made by purchasing a combined Cathedral/ Castle ticket at just £18 as they are close together and both wonderful places to visit.

We began our visit in the red brick Victorian prison which held prisoners from 1848-1878 for crimes ranging from petty theft to highway robbery and murder.

The prison has been painstakingly restored giving access to the cells and by using the interactive displays, we got a feeling of what it must have been like to be locked up behind bars.

The prison has three floors of restored and recreated cells spread over separate male and female wings.

A highlight for me was a visit to the prison chapel.  I’d never seen anything like it as prisoners were placed in separate cubicles so that they could participate in the service but were unable to come into contact with other prisoners.  It was both austere and atmospheric especially as several model figures had been placed in the cubicles and until we climbed up to the pulpit, we had no idea that they were there.

A newly installed vault contains one of only four original copies of the Magna Carta which is one of the most celebrated documents in the history of England.  The charter sent to Lincoln in 1215 was read out at the Sheriff’s court in Lincoln Castle before being placed in the Cathedral Treasury for safe keeping.  It has been retained in Lincoln ever since and is on permanent loan from the Cathedral.  On view alongside it is the Charter of the Forest dated 1217.  At the time of our visit the Magna Carta was in fact not on display owing to annual restoration work, so it might be worth checking in advance if viewing it is of particular interest.  A cinema screen on the floor below explores the Magna Carta explaining its significance.

A courthouse lies within the castle walls which has been in use since it was first built in 1826 and is still in use today as Lincoln Crown Court.

Before leaving the castle we took a walk along the medieval wall, slowly making our way along its circumference, pausing frequently to take in the stunning views of the city and surrounding countryside.  Entrance to the wall is included in the castle ticket and audio guides are also available offering a commentary on its history.

We just managed to complete the walk before the castle closed, so allow plenty of time for visiting the castle as there is so much to see and do.

It was then back to our hotel room for a rest and a cup of tea before enjoying a meal in Brown’s Restaurant and Pie Shop.

We’d noticed this small restaurant whilst walking up Steep Hill and thought it looked perfect for a cold winter’s night.  Cosily arranged over two floors, Brown’s specialises in gourmet pot pies with a selection of other dishes on offer too.  We couldn’t resist a pie with my son selecting the Murphy’s Irish stout and beef pie whilst I opted for the steak and kidney.  Our generous sized pies were served in individual pots and accompanied with creamy mashed potato and a medley of fresh vegetables which we accompanied with pint’s of lager.

This was comfort food at its best with the tender pieces of steak in rich gravy melting in our mouths.  It’s a popular little place as all the tables were taken whilst we were there, so its perhaps a good idea to book especially if you intend dining there at weekends.  In addition to beef, pies come with game, cheese, vegetable, fish, wild rabbit and other fillings and most served with a puff pastry lid.  Its an informal little restaurant with friendly and efficient staff.  Another place I want to return to, and because the pies are made in pots, i.e. that they don’t have pastry bases, they can’t be fattening can they!

We then walked off our tasty meal with a stroll down to the newer part of town before returning a little more slowly back up Steep Hill to our hotel.  What a lovely day we’d had visiting both the Cathedral and the Castle.  Stay tuned to find out how we spent our final day in lovely Lincoln.

A weekend in Lincoln

A short break in the Ribble Valley

A weekend in Norwich