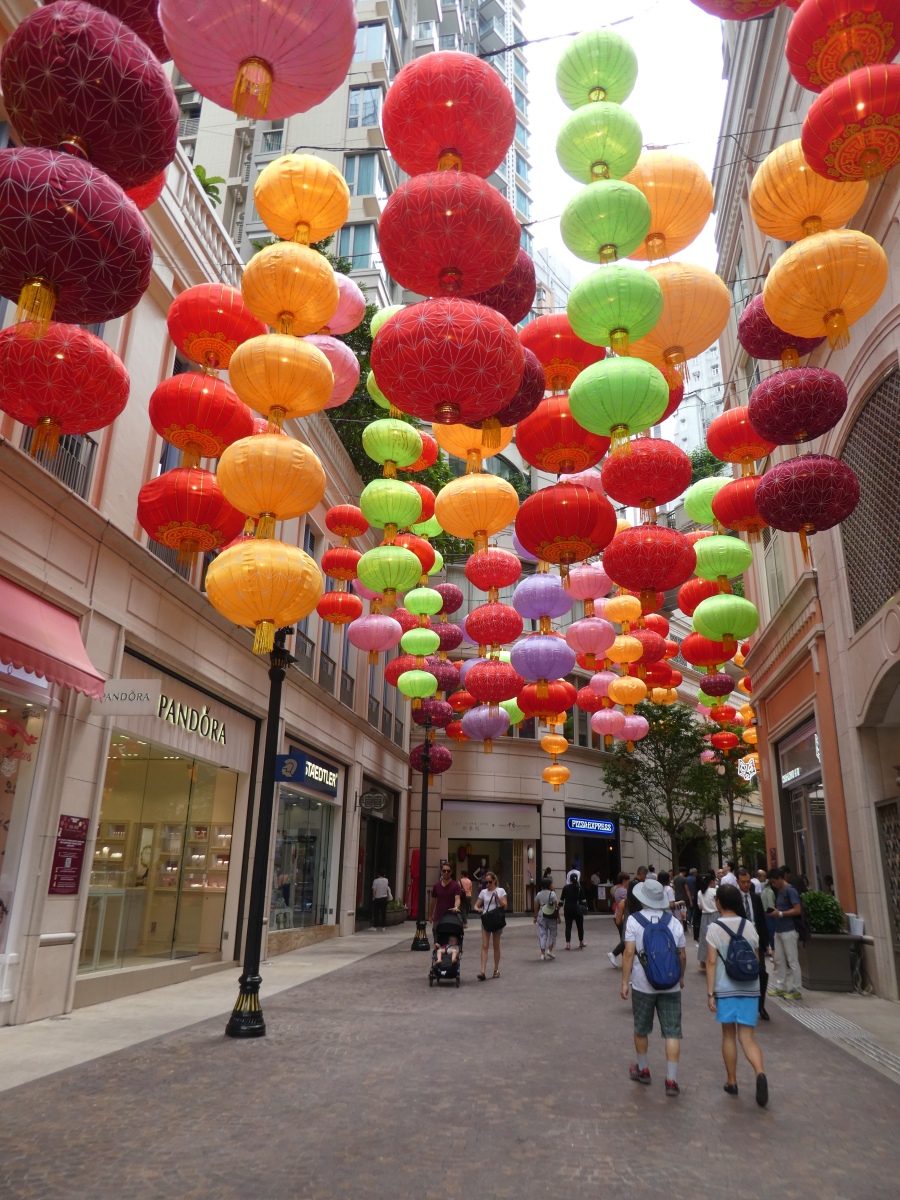 We woke to yet another bright, sunny morning and after eating breakfast we took the MRT to Central and sped along to ferry pier 4 with just a few minutes to spare before the 10.10 a.m. fast ferry to Yung Shue Wan on Lamma Island departed. We paid the HK$16 (£1.60) fare using our Octopus cards and found seats outside on the upper deck. The 25 minute journey was very pleasant with a warm breeze and some good views of Central and Kennedy Town as we left Hong Kong Island behind.

It was our first visit to Lamma Island as on each of our previous trips we had chosen to visit Cheung Chau. Stepping off the ferry we walked along the pier with its brightly coloured banners fluttering in the wind, welcoming us to the island.

Our original plan had been to take the walking trail around the island to Sok Kwu Wan and to return on one of the ferries from there but our calf muscles still ached from the previous day’s exertions. Instead, we decided to take it easy and enjoy a gentle stroll along the pretty tree lined seafront.

Yung Shue Wan is the largest village and its attractive promenade has several seafood restaurants and cafes, all with outdoor tables, their parasols faded from years in the sun.

The island has a population of around 6,000, many residents having moved to Lamma for its slower paced, relaxed way of life. Wandering further along the promenade we looked in the small Tin Hau Temple dedicated to the Goddess of the Sea and near there, a tiny hospital which had a miniature sized ambulance parked outside designed presumably to negotiate the very narrow roads.

On the ferry back to Central we chose to sit indoors out of the sun, the gentle rocking motion causing us to become sleepy, so we had a few minutes rest before returning to Central. Our first stop on reaching Central was for cups of coffee in the IFC Mall and then feeling a little more invigorated, we took a tram to Wan Chai.

Our reason for visiting Wan Chai was to take a walk along Lee Tung Avenue which had come to my attention when reading the lovely blog Sue’s Fabulous Travels. Completed in 2015, this 200m tree lined pedestrian boulevard is home to 70 upscale designer shops, bars and restaurants modelled on three historic tenement buildings in the area.

The street was originally called Wedding Card Street’ as it housed printers for wedding invitations. As we had conveniently timed our visit to coincide with the mid-autumn festival, the street was adorned with colourful lanterns and an inflatable art installation named ‘Moon Rabbit Lumiere’ comprising two giant and three smaller rabbits. The rabbits looked very attractive but we thought they would look even nicer after dark when they were illuminated so decided to return later.

We then popped into a nearby cafe for a late lunch before spending the remainder of the afternoon shopping, returning to our hotel once again with several large carrier bags. Later in the evening, we returned to Wan Chai to take a look at the rabbits again which looked even more beautiful than earlier.

To round off the evening we took the metro one stop to Causeway Bay and marvelled at the bright lights of Times Square. It was 9.00 p.m. and the district was still crowded with people shopping and enjoying the warm, evening air. No trip to Hong Kong can be complete for us without a visit to the enormous SOGO department store where we spent at least an hour looking around and making even more purchases. Thank goodness Cathay Pacific has a generous 30 kg baggage allowance!

We returned to the hotel and put off the task of packing until the next day as it seemed hard to believe that our stay in Hong Kong had sped by so fast.

Cheung Chau and a visit to the Hong Kong Flower Show