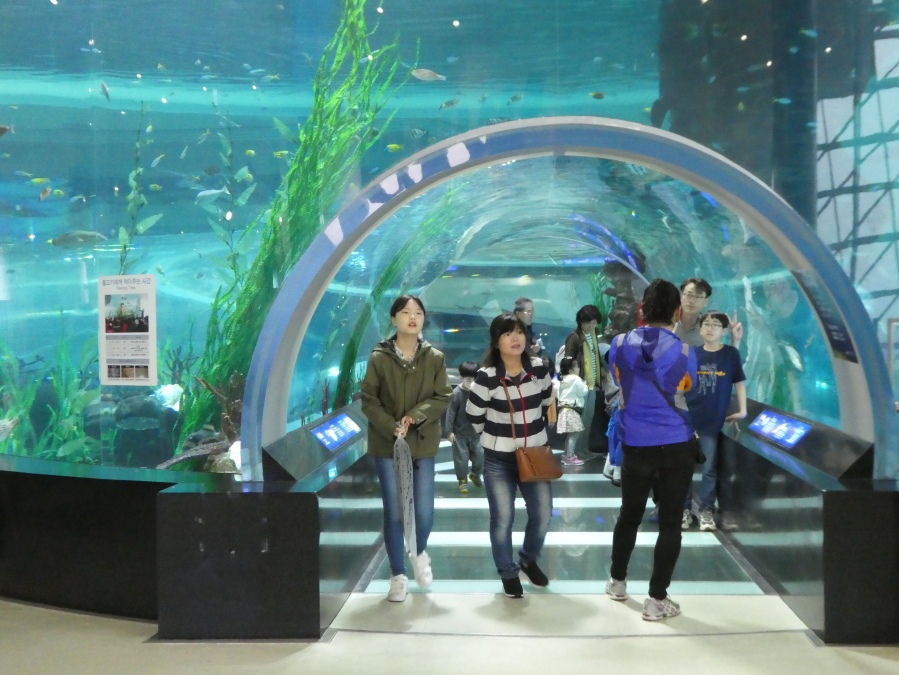 We woke to the sound of heavy rain beating on the bedroom windows so it was fortunate that we still had one museum we wished to visit during our stay in Busan.  After a breakfast of dumplings, eggs, fruit and yogurt we set off for the nearby Seomyeon metro station with our umbrellas at the ready.

The Korean National Maritime Museum opened in 2012 and is the third largest museum in Korea, with admittance being free.  The exhibition halls are spacious which was just as well as everyone else seemed to have had the same idea as us of visiting the museum on a wet Sunday morning.

We started our self guided tour in the Underwater Cultural Heritage from Wando gallery which displays approximately 3,000 ceramic relics excavated from the sea.  Moving on to the next gallery, Underwater Culture – 14th century ships, we found glass cabinets containing crockery, jewellery and trinkets relating to the maritime trade in east Asia 700 years ago.

This section on the life of a Korean fishing village was very interesting as it described the traditional fishing techniques and living conditions of those times.  A further section then compared the fishing methods of today with those of the past.  The final section was my favourite and covered the development of Korean shipping and shipbuilding with several scale models on display, the roles of the navy and a section devoted to Port of Busan.

Within each gallery we found numerous hands-on activities and simulators making the visit a fun, learning experience.  Surprisingly for a maritime museum there is also a small aquarium where visitors can observe aquatic creatures from a glass tunnel.

It was still raining heavily as we left the museum so we dashed across the road to catch the No.66 bus back to Nampo station.  Deciding to remain indoors as much as possible, we caught a train to Centum City changing lines at Seomyeon station.

We had come to visit the Shinsegae Centum City Department Store which is registered in the Guinness Book of World Records as the largest shopping complex in the world.  In addition to shopping, visitors can also visit numerous cinemas, an ice rink, spa and golf driving range.

Over the next couple of hours we wandered through sections of the store pausing for some lunch in one of the food courts.  We enjoyed looking around the homeware department where we found huge Samsung fridges with large drawers at the base for storing kimchi (Korean fermented vegetables) at the correct temperature.  I had thought they were salad drawers until an obliging assistant explained they were meant for kimchi with salad drawers located above them.

There was also a large display of Portmeirion Botanic Garden tableware which we use at home every day.  This iconic range has now been in production for over 40 years and continues to be popular.  I was surprised but pleased to note that this range is a favourite of the South Korean’s with the third highest sales outside the US and UK.

Deciding to leave Shinsegae, it took absolutely ages to find our way out, making trips to IKEA a breeze.  The metro station is located under the department store but as Shinsegae has numerous basement levels and is so big it was like a maze trying to find it, a few signs in English would have been very helpful!

Back in Seomyeon we did some more shopping in a branch of Daiso which is a Japanese homeware store whose aim is for shoppers to find surprises and fun.  It stocks almost every useful household item you could possibly want along with lots of things we never knew existed and probably don’t actually need.  Of course, seeing these ‘new items’ we realised we couldn’t possibly manage without some of them and bought all sorts of odds and ends to fit into our suitcases to take back home!

It was still raining later in the evening when we ventured out for our final evening meal in Busan.  After wandering through the neon lit streets of Seomyeon awhile we settled on going into one of the Korean barbecue restaurants.  It was a perfect way to savour our time in South Korea and possibly the last time in awhile we’d be eating Kimchi, the Korean favourite side dish!

Taejongdae Park, Busan and a visit to Nampo