Malham is a small village at the southern edge of the Yorkshire Dales and is an idyllic little place.  Nowadays hill farming and tourism are Malham’s main activities with a good selection of accommodation to suit all tastes dotted around the village.  Located at the upper end of the River Aire valley, the area has long been popular with both serious hill walkers and those content with a gentle stroll followed by tea and cakes in one of the inviting little cafes.  If travelling by public transport, Gargrave is actually the nearest railway station but there are better connections from Skipton (10 miles away) with onward buses to Malham.

We travelled by car, the journey taking us considerably longer than expected as the narrow roads of the Yorkshire Dales were not built for cars resulting in some slow progress.  As we neared the village centre it was apparent that a visit to the cove was the choice of the day as I had never seen so many cars there.  The official car park located behind the visitor centre was already full and several fields on the opposite side of the road had been utilised for additional parking.  Judging by the number of vehicles, there must have been some happy farmers raking in £5 a car!

After managing to find a parking space ourselves we set off for a walk to the cove.  Our first stop was going to be a visit to the Yorkshire Dales National Park visitor centre but sadly this was still closed with just a member of staff sitting in the doorway assisting with enquiries.  We’ve looked in the centre previously as it provides interesting displays about the geology of the area along with maps, books, souvenirs and clothing.

Malham is characterised by its traditional Dales stone cottages and the old packhorse bridge that crosses the stream at the head of the village.  A heritage signpost indicated that the direct route to the cove was to the left along Cove Road but we decided to take a slight detour to the right passing The Listers Arms.

On our previous visit to Malham during the Christmas holidays three years ago, we enjoyed a bar snack sitting beside the inglenook fireplace in this cosy pub.  The weather on that mid-winter day was very poor making it virtually impossible to make out the outline of the cove.  At the foot of this post I’ve included a link back to that trip in which you can see the outside of The Listers Arms looking beautiful, wrapped with a large festive bow.

Back to our July 2020 visit, we crossed the narrow bridge across the stream being careful not to fall in as it only has a handrail on one side.  A right turn at the end of the footpath brought us out onto Cove Road which we followed through the village.  Shortly after passing the last of the buildings we reached a small gate with a signpost leading to the cove.

From there, we caught our first glimpse of the stunning cove which is a huge limestone amphitheatre shaped rock formation.  It was created by a waterfall carrying melt water from glaciers at the end of the ice age more than 12,000 years ago.  The vast amount of water flowing over the waterfall created a curved lipped shape because the edge was more heavily eroded than the sides.

The well maintained footpath alongside Malham Beck towards the cove forms part of the Pennine Way, a 268 mile national walking trail along the backbone of northern England.  We passed several cows and bullocks with one or two of them raising the energy to view the comings and goings of walkers along the path.  Although the village car parks seemed overrun with visitors, people soon spread out and it never felt crowded.

The footpath ends by a pair of gates near to the cove but it’s possible to continue into the amphitheatre to take a closer look at the breathtaking view by scrambling over a few rocks.  The sheer rock face challenges rock climbers and we spotted several groups attempting climbs on different parts of the cove.

The vertical face is 260 ft high and has some of the hardest climbs in the country attracting climbers from far and wide.  As well as being popular with climbers, pairs of nesting peregrine falcons call the cove their home as it provides protection for them but sadly we didn’t see any during our visit.

We then retraced our steps a short distance back to the footpath to enable us to climb up to the top of the cove.  To prevent erosion, steps have been built most of the way up but as these have been made from limestone they blend in with the natural landscape and do not detract from it. Some of the steps are quite steep but it’s a fairly easy hike especially if like me you pause occasionally to look back over the stunning Malhamdale scenery.

I definitely recommend making the effort to climb to the top to view the geological phenomenon.  It’s a large area of deeply eroded limestone pavement rarely found in England which was created as ice water melted.

We carefully stepped across the small flat blocks of limestone separated by deep crevices that had formed in the ice age then peered over the edge taking in the spectacular views of the valley below.  Fans of Harry Potter might recognise the limestone pavement as scenes from The Deathly Hallows, Part One were filmed there.

After relaxing awhile sitting on a limestone boulder breathing in the fresh air, we carefully made our descent back down the stone steps.  Part way down we could see the full extent of the gently undulating path running alongside the beck that we had followed.

Back in the village, we had a little look in the gift shop where we found lots of locally sourced products from pots of honey to candles and hiking gear.  It was so nice to find shops, cafes and pubs springing back to life once again and people out and about.

As we couldn’t go home without a well earned drink in the pub we stopped off at The Victoria in the nearby village of Kirkby Malham which has its own car park and was less busy but just as nice as the pubs in Malham.  The end of a lovely few hours in the delightful Yorkshire Dales.

A Winter’s Day in Malham 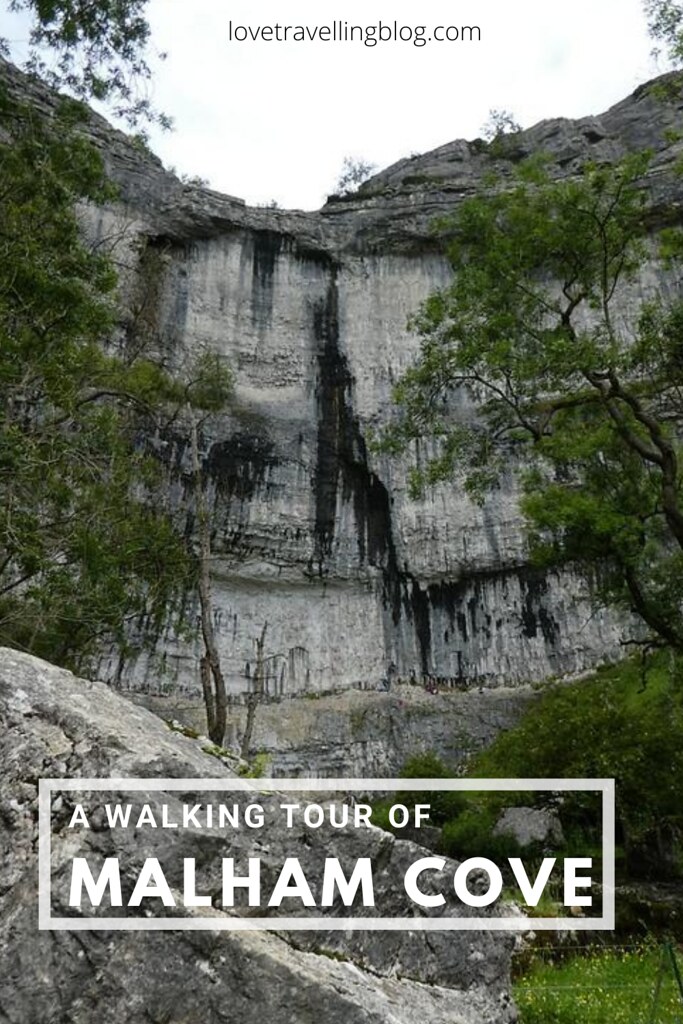