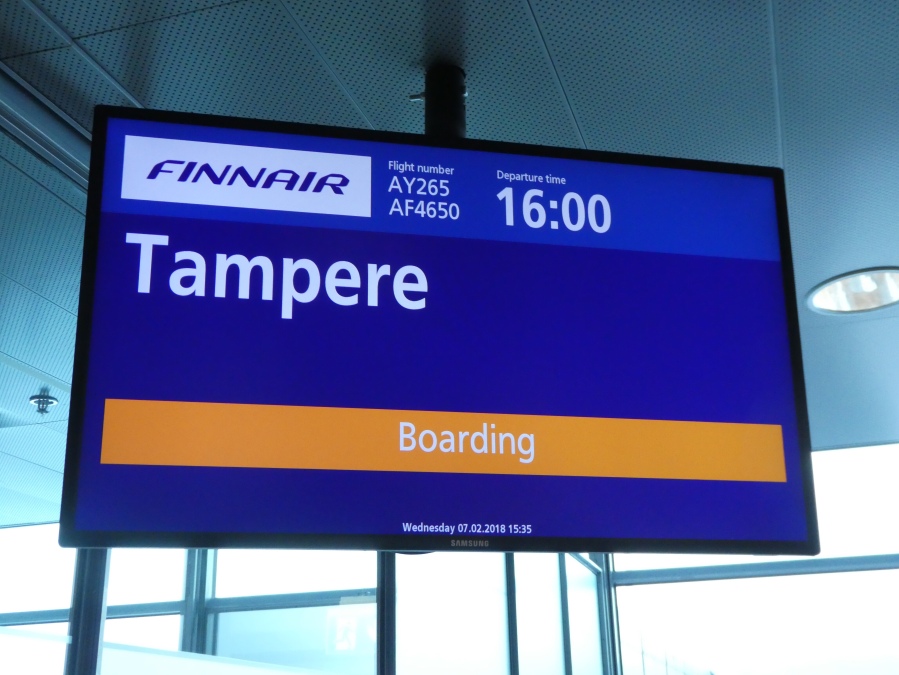 Those of you who are regular readers of my blog may already be aware that recently I won an international blog contest organised by Talent Tampere a division of Business Tampere which links companies with internationals and their networks.  My prize was a four day visit to Tampere, Finland’s third largest city to explore the international and travel sides of the scenic Tampere region.

On the morning of my departure, to say I was excited was definitely an understatement as I waited to board my flight from Manchester Airport.  Although there are currently no direct flights to Tampere, there is a very easy connection via Finland’s capital, Helsinki.

My flight on-board a Finnair Embraer 190 aircraft, seating 100 passengers was very pleasant.  The cabin crew were professional yet friendly and although meals are no longer complimentary, free drinks are served.  During the 2 hr 50min flight the trolley passed through the cabin three times and I enjoyed two cups of coffee and a refreshing glass of blueberry juice, all served in Marimekko cups, showcasing Finnish design.

Coming into land at Helsinki Vantaa Airport was like entering a winter wonderland with the entire landscape blanketed in thick snow.  As I took the bus transfer to the terminal, a convoy of snowploughs drove past, working hard to keep the airport open as snow continued to fall.  I had a short connection of only 40 minutes but the airport is both compact and efficient, allowing sufficient time to clear immigration and reach my gate just as it had opened.

My short Finnair flight, operated by Nordic Regional Airlines (NoRRA) on an ATR 72-500 and seating 68 passengers took just 35 minutes to reach Tampere Pirkkala Airport.  There was even more snow to greet me in Tampere and it only took a few minutes to collect my luggage as the airport is quite small.

Walking out into the arrivals hall, it was so exciting to meet Maiju and Eero, my hosts from Talent Tampere with whom I would be spending the next few days.  Introductions complete, we took a taxi to my hotel in the city centre, taking around 20 minutes.

My home for the next three nights was the Lapland Hotels Tampere and on checking in, I was thrilled to find that my room reservation had been upgraded to a suite!  Each floor of the hotel has its own seasonal Lapland theme, and befitting the time of year, my suite Lumo, was located on the winter floor. The suite was luxuriously furnished with separate bedroom and lounge areas in muted Nordic shades.  Also, at my disposal were two large televisions, a private sauna and two showers!

I’d arranged to meet my hosts a little later in the hotel lobby and also joining us, was Olga from Visit Tampere who I would be spending time with the following day.  We wrapped up warm and ventured out into the sub zero temperatures for a walk through the city centre to the Kattila Bistro where we were shown to a cosy window table.

As it was a cold evening, I started my meal with Jerusalem artichoke soup with sherry cream and prosciutto which was served with local rye bread and tasted delicious.  To follow, I selected potato blinis with roe, sour cream and pickles which were also very good.  It was a lovely, relaxing evening and I was made to feel very welcome on my first evening in Tampere.

The Cotton Mills of Tampere and Manchester

What a view to welcome me to Lincoln. Can't wait to start exploring this historic city! @visitlincoln #lovelincoln #lincolnshire #visitengland
Goodnight Blackpool, it was lovely visiting you! #blackpool #blackpooltower #lancashire #sunset #northpier
Enjoying a ore-theatre meal @beachhouseb overlooking the sea in Blackpool. The food is delicious and the atmosphere buzzing #restaurant #Blackpool #Bistro
Satisfying my wanderlust @destinations_shows taking place at Event City in Manchester until Sunday. So much to inspire me plus cooking demos, photo workshops and talks. Why not come along this weekend for a great day out and some travel ideas #destinationsshow #eventcity #manchester #travel #wanderlust #lovetravelling #travelshow #loveribblevalley
Wandering through Moscow's Red Square is like stepping into a fairytale. You might like to read about my visit in my latest blog post
Wish they were more heritage signs such as this one around our railway stations. I always need to pause and admire the Scottish terriers #scottiesofinstagram #scottiedog #scottishterrier #edinburghwaverley #vintagesigns
Wishing everyone a Happy New Year #happynewyear #2020 #newyearseve #newyear #lovetravelling
Festive greetings from Edinburgh. Read about our pre-Christmas visit in my newly published blog post #edinburgh #edinburghchristmasmarket #Scotland #visitedinburgh #lovetravelling #lovetravellingblog