After sleeping soundly, we headed out of the lovely apartment in Clifton where we were spending the weekend to explore the local neighbourhood.  It’s an affluent suburb of beautiful Georgian townhouses, close to the centre yet far enough away to have its own charm.

Bristol Zoo Gardens was our first planned attraction of the day, just a short walk along leafy streets and located on College Road.  Bristol is the 5th oldest zoo in the world and was founded by a local physician as far back as 1835.  The zoo continues to maintain its mission through breeding and conserving endangered species and is in a scenic parkland setting on the edge of the city.

Standard admission to the 12 acre gardens is £16.22.  There are over 400 species to be seen including red pandas from China, gorillas from the tropical rainforests of Cameroon, a golden lion and African penguins.  Usually associated with cold climates the penguins at Bristol are more accustomed to the warmer temperatures of South Africa and Namibia.

The landscaped gardens are beautifully maintained with colourful planting intermingled with walk through zones housing small creatures such as meerkats and reptiles.

It was fun watching a very agile gorilla swinging from the trees and then viewing the seals take a leisurely dip in the water before lazing on the bank.   There’s a one way signposted route around the gardens with the option of missing sections out if preferred.

We spent around two hours happily wandering around learning about the creatures and their natural habitats.  As well as coming to see the animals, the gardens with their collection of unusual trees, shrubs and plants from around the world provide an enjoyable botanical experience for plant lovers.

On leaving the zoo it was then a pleasant fifteen minute walk through an attractive avenue of trees along a footpath lying parallel with Clifton Down Road to the Clifton Observatory overlooking Avon Gorge.

Entrance to the observatory is £5 which is good value as it includes visiting the museum, camera obscura and also allows access to the Giant’s Cave.  We started off at the Observatory tower which is home to the museum that includes an interesting timeline of the observatory’s history, early photos of Bristol and information about its historic camera.

Up on the top floor, tucked away in a small darkened room is William West’s Camera Obscura, one of just three working in the U.K.  This feat of engineering has sat on top of Clifton Tower since 1828 and we were intrigued to see how it worked.

We followed instructions to rotate a long handle and this provided us with a 360 degree view of Bristol on a screen below.  It was amazing that the camera was still able to project real time images almost 200 years since it was installed.

Through the opened windows of the top floor there were splendid views of the Clifton Suspension Bridge, Avon Gorge and down to the observatory cafe below.

After carefully making our way back down the spiral staircase to ground level, it was then time to go underground to explore the Giant’s Cave.  We followed a path cut into the limestone rocks of Avon Gorge, needing to bend down occasionally so as not to bang our heads as we passed through the 60m tunnel which opens out onto the cliff face 76m above the River Avon.

Stepping out onto the balcony we enjoyed more splendid views  of the bridge and gorge from a different perspective then after a few minutes rest we disappeared back into the tunnel and climbed back up to ground level.

We’d seen the famous Clifton Suspension Bridge from afar and now it was time to walk across it.  This beautiful icon of Bristol was designed by Isambard Kingdom Brunel and took 33 years to build.  Sadly, Brunel never got to see his masterpiece as he died five years before its completion.

A one way system is currently in operation for pedestrians crossing the bridge but this worked well as it meant we were able to enjoy different views in each direction.  The suspension bridge links Clifton, Bristol to Leigh Woods in North Somerset where there is a free visitor centre run by volunteers documenting its history.

It was then just a short walk from the bridge down to Clifton Village.  Spending at least a couple of hours here should definitely be on everyone’s Bristol itinerary as it’s absolutely beautiful.   There’s an eclectic mix of shops ranging from independent designer boutiques, to antiques, vintage and the best of the high street with the likes of Crew Clothing, White Stuff and Joules.

Centred on the village is the elegant Victorian Clifton Arcade which originally opened in 1878 and is now home to galleries and upscale small stores.  The entire neighbourhood has a vibrant continental feel to it with its many cafes,  wine bars and restaurants all spilling out onto small squares and pavements.

With so many dining options close at hand we were spoilt for choice from wonderful independent coffee shops like Spicer & Cole and the Primrose Cafe to restaurants such as No.4 Clifton Village and a branch of The Ivy.

After a relaxing lunch, we were feeling refreshed and ready to embark on a self-guided Banksy street art walking tour of the city.  From Where The Wall  an app can be downloaded for £10 enabling two devices to be used over a 24 hour period.

The Piece of Banksy walking tour is fully narrated and uncovers the story of this illusive Bristol street artist and can either be started at the Harbourside or Stokes Croft.  Banksy is known all over the world for his anti-establishment and thought provoking street art and with 13 pieces spread out over a wide area of the city, the tour can easily be broken down into smaller chunks if preferred.

I would suggest wearing comfortable shoes as from our selected starting point at Stokes Croft we followed the route up and down Bristol’s steep hills seeking out Banksy’s street art.  Not only that, it was also an opportunity to explore some interesting parts of the city that we were unfamiliar with.

Interesting sights we came across included the Christmas Steps, a quaint narrow passageway with a very unusual name and surely one of the most picturesque streets in the older part of the city.

Our walking tour also took us past the beautiful Foster’s Alms houses on Colston Street.  These alms houses were founded in 1483 by a local merchant and designed in French Gothic Revival Style with their turrets and tall brick chimneys.

Banksy’s street art is wide ranging some of which I found more appealing than others.  My favourite was the very last one on the tour located quite close to SS Great Britain.  This was of the Girl with the Pierced Eardrum depicting a take on Vermeer’s famous Girl with a Pearl Earring, replacing the girl’s earring with a burglar alarm.

Completing our street art tour at the harbourside, we rounded off the day enjoying a meal in one of the waterside restaurants after such a fun filled day exploring the delights of Bristol. 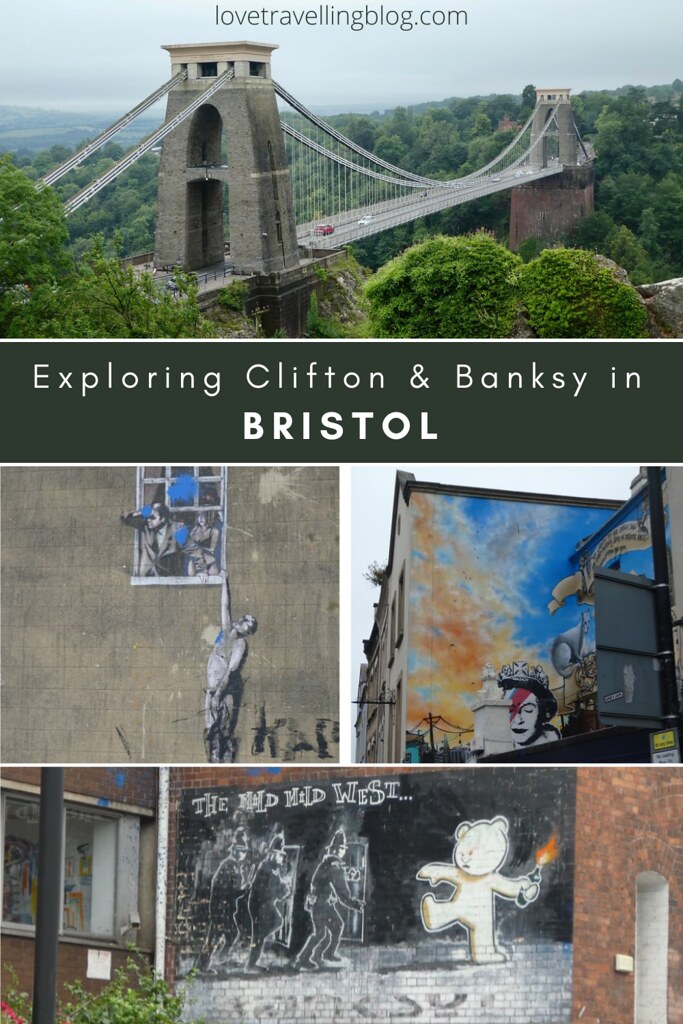