After recently spending an enjoyable weekend in nearby Liverpool, we decided to turn our attention to the Wirral Peninsula.  This stretch of land is bordered by the River Mersey to the east, the Irish Sea and River Dee to the west and the Shropshire Union Canal to the south providing us with 25 miles of coastline to explore.

We began our first day with a visit to The National Waterways Museum at Ellesmere Port.  Open daily 10.00 – 17.00 with standard admission £9.75 (ticket valid for unlimited return visits in a year).  The museum is located in the historic docks which are at the junction of the Shropshire Union Canal, Manchester Ship Canal and the River Mersey.  Designed by the great civil engineer Thomas Telford, it was the largest inland waterway dock complex in the United Kingdom.

This delightful waterside setting is mostly open-air with old warehouses and cottages set around the locks of the canal basin with its historic narrow boats.  We were provided with a detailed map at the ticket desk and it was explained that QR codes were available at strategic points for listening to commentaries on our phones, if we so wished.

A large canal-side warehouse has been converted into the main exhibition area detailing how Ellesmere Port began its life in 1795 with the opening of the Wirral Line of the Ellesmere canal, connecting to the River Mersey and the Port of Liverpool.  We learnt that goods brought here by canal were then transferred into sea going vessels whilst imported raw materials were taken by canal boats to neighbouring mills and factories.  The extensive display includes over fifty boats and 15,000 objects making it the largest inland waterways collection in the U.K.

Moving on to the Power Hall, we found this to be packed full of engines ranging from steam to diesel, each of them originally used to move water or propel vessels through it.  At certain times of day various machines are powered up to demonstrate their working parts.  From there we explored the stables and forge where the museum’s resident blacksmith offers demonstrations in creating wrought iron products.

Next it was time to take a look at the oldest surviving row of cottages in Ellesmere Port known as Porters Row.  Located slightly separate from the rest of the docks, twelve cottages were originally built for the dock workers in 1833 and were home to shipwrights, blacksmiths, railway workers, porters and their families.

Only four cottages remain today, numbers 9 to 12 and internally they have been furnished to reflect different time periods.  The styles of the living rooms and kitchens reflecting the social history of the period covering 1830, 1900, 1936 and 1952.  Although I enjoyed touring all parts of the museum, this row of cottages was one of my favourites.

A garden lies behind the terrace which we accessed through a gate at the side of the cottages and has been planted in a similar style to how it would have looked in days gone by.

It was then time to investigate the locks which were receiving a coat of paint at the time of our visit.  There are two sets of locks between the upper lock and canal dock basin.  The wider locks date from before the Manchester Ship Canal was built.  The narrow locks were added some 80 years later for narrow boats to pass through and use less water.

It’s possible to clamber on board several of the boats moored at the museum and short boat trips are currently available Thursday to Sunday but its best to consult the website before visiting to avoid disappointment in case this changes.

To round off our visit to the museum we looked in the well stocked museum shop and then enjoyed a cream tea in the cafe which has a pleasant outdoor terrace overlooking the canal.

Leaving the National Waterways Museum it was just a few minutes drive to Cheshire Oaks Designer Outlet Village for a spot of retail therapy.  The outlet has several large car parks but these were all full and it took awhile for us to find a vacant parking space to leave the car.

Despite it being very busy, we still enjoyed a wander around the shops and true to form as an avid traveller, I came away with yet another suitcase to add to my collection!

Shopping trip over, it was back in the car and onto West Kirby, located on the north western tip of the Wirral peninsula at the mouth of the River Dee.  The town centre features some Tudor architecture and has a mixture of high street brands and small independent shops and cafes on its high street.

We enjoyed a stroll along the seafront and around the Marine Lake.  Being low tide, the beach was exposed towards Hoylake where we were heading next.  It’s possible to walk to Hilbre Island at low tide but important to check the tide timetable first to prevent getting cut off.

The Royal Liverpool Golf Club lies mid-way between West Kirby and Hoylake.  This world renowned club frequently plays host to the Open Championship on its challenging links course with the tournament taking place there next in 2023.  The Royal Liverpool is the second oldest of all the English seaside clubs after Westward Ho! in Devon.

Its beautiful, ivy clad clubhouse overlooking the first tee was built in 1895 with a library containing a fine collection of literature about golf in general and the Hoylake club in particular.

Back in the car we continued into the centre of Hoylake where we had planned to stay.  Along with West Kirby just down the road, it’s a pleasant small town with an attractive high street lined with a good selection of cafes, restaurants and small shops.

Our first day on the Wirral peninsula had been fun filled with our visit to the National Waterways Museum being a highlight.  With more interesting activities planned for the following day, we were tucked up in bed early hoping for good weather. 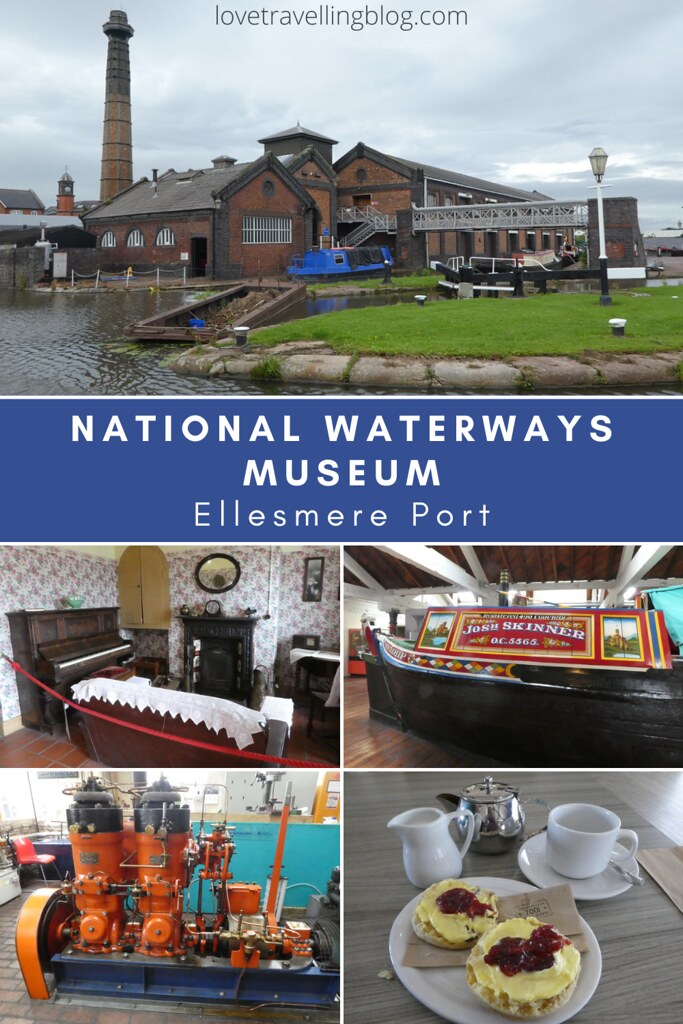 41 thoughts on “Day 1. The National Waterways Museum, The Wirral”