Despite it being an overcast morning, my spirits were high as we started the day with a drive to the small fishing village of Port Isaac on Cornwall’s north coast.  We left our car in the main car park paying £3 for a three hour stay.  The car park is located 725 metres from the village centre but as it was down a steep hill it didn’t take very long to reach the pretty harbour.

I’d never visited Port Isaac before but recognised the quaint little harbour immediately as the village is the fictional village of Portwenn in the BBC television comedy Doc Martin.  The popular series stars Martin Clunes as the grumpy Doctor Ellingham along with his wife Louisa (Caroline Catz) and their adorable pet dog, the Westie/ Jack Russell cross, Buster.  It’s one of my favourite programmes and I was so excited to be able to explore some of the filming locations.

From the harbour we caught our first glimpse of Doctor Ellingham’s surgery on the hilltop and just below it we also spotted the restaurant run by Bert Large.  The TV programme has certainly put Port Isaac firmly on the tourist map and, although not crowded, there were plenty of people enjoying a stroll through the pretty village with its exceedingly narrow streets and rows of whitewashed fishermen’s cottages.

We wandered up Roscarrock Hill from where there were some lovely views back down to the harbour.  The main reason for climbing this steep hill was to be able to stand in front of the doctor’s surgery which from the exterior  looked just the same as on the programme.  In real life it’s actually a holiday let called Fern Cottage where visitors to the village can stay when filming isn’t taking place.  I’m sure their bookings must have increased dramatically since the programme first aired in 2004.

Back in the village centre we easily recognised Buttermilk Confections as it doubles as Mrs Tishall’s chemist’s shop.  This small shop is the only actual interior used for filming as all the others are shot in studios located at Roscarrock Manor Farm on the edge of the village.  The main sets have been constructed in agricultural barns and include the surgery, police station and Bert Large’s kitchen.

Continuing our stroll we recognised the village school and The Golden Lion pub overlooking the harbour.  This pub is also a regular filming location where its name becomes the Crab and Lobster.

Leaving the TV programme aside, Port Isaac is a very attractive village and definitely worth visiting whether you’re a fan of the drama or not and a lovely place for a walk.

We followed the South West Coast Path along the cliff top to the neighbouring village of Port Gaverne which lies in a sheltered inlet and has a small beach.  It was a pleasant but hilly walk as the path undulates considerably.

It was around midday by the time we returned to the car and the large car park which was almost deserted when we arrived was nearly full, so it’s probably a good idea to arrive in Port Isaac early in the day to be assured of finding somewhere to park.

Setting off again, our next destination was Wadebridge, 10 miles away.  It’s one of Cornwall’s main market towns and the gateway to the Camel Trail.  Before you get any ideas of desert camels, the name has no connection with the humped animal but is derived from the Cornish for ‘elbow’ as the River Camel is of an elbow shape.

The trail was created on 11 miles of disused railway that ran along the valley beside the river.  Wadebridge is the centre of the trail with links in either direction to Padstow and Bodmin.  It’s a mostly level route and very popular with cyclists and walkers.

The town has an impressive 15th century bridge with 17 arches crossing the River Camel close to Molesworth Street, the town’s main shopping thoroughfare.  Along here we found numerous craft shops, pubs, cafes and galleries intermingled with the usual household names.

We were ready for some lunch and the Cornish pasties we spotted in the window of bakers Malcolm Barnecutt tempted us in.  We’d been in Cornwall an entire week but were still to sample the pasty which has long been part of the local cultural heritage.  It is believed to have originated with Cornish tin miners who, unable to return to the surface at lunchtime, could still enjoy a hand held hearty meal.

Our own traditional Cornish pasties were delicious, containing diced beef, potato, swede and onion encased in shortcrust pastry with crimped edges.  They were not a bit like the inedible, fatty pasties to be found in fast food outlets up and down the country.  Followed up with a cappuccino each, it was a very filling and tasty lunch.

Feeling re-energised after our brief lunch stop, it was back to the car for the short drive to Tintagel.  Our SatNav decided to send us along some very winding, narrow lanes with just the occasional passing place so some careful reversing proved necessary before we made it to Tintagel.  The name Tintagel is synonymous of where history meets legend, with the ruins of a medieval castle entwined with the mythical stories of King Arthur.  A few centuries later Alfred Lord Tennyson’s poems revived the interests of Arthur once again with his Knights of the Round Table.

We managed to find a parking space in King Arthur’s car park (£3 for four hours) which was close to the village centre.  From there, we followed a path taking around 10 minutes to reach the medieval gateway entrance to the ruins of Tintagel Castle.  The castle estate is managed by English Heritage with standard adult admission £16 or free for English Heritage members.

Both the village and its castle are set high on a cliff top with stunning coastal views.  The castle is approached by a 68 metre bridge over a spectacular rocky chasm that separates the two halves of the 13th century castle.

Having crossed the bridge we’d reached the island which is a Site of Special Scientific Interest (SSSI) and contains the remains of the medieval walled garden and the castle.

There’s very little of the castle still standing, with the best preserved sections being the Great Hall with its arched doorway and slit windows.  Useful information boards guide visitors through the site, documenting the castle’s history and the significance of the ruins.

With its exposed windswept position, the grassy headland is an ideal place for bird watching and to look down at huge waves crashing against the rugged coast.  After exploring the cliff top we followed a one way system down several flights of steps leading towards the beach.

Getting onto the beach itself isn’t easy as it requires some scrambling over rocks to reach the sandy cove.  It’s worth noting that visitors are able to access the beach without needing to purchase a castle ticket.  At one corner of the small bay is the cave where the legendary Merlin is believed to have lived and it is interesting to explore at low tide.  There’s also an impressive waterfall cascading down onto the beach which is popular for children to play beneath.

We then followed the path back up to the cafe and gift shop before climbing the hill back to the village centre.  A shuttle bus service operates up and down this road to assist those with mobility problems (fee payable).  The small village is mostly given over to tourism with its numerous gift shops, pubs and cafes but this is only to be expected with its position on the doorstep of a famous castle.

Driving back to the hotel we tried to avoid taking the same narrow roads we’d arrived on and after safely getting back to Bodmin we relaxed over cups of tea reflecting on what a fun filled day we’d just had. 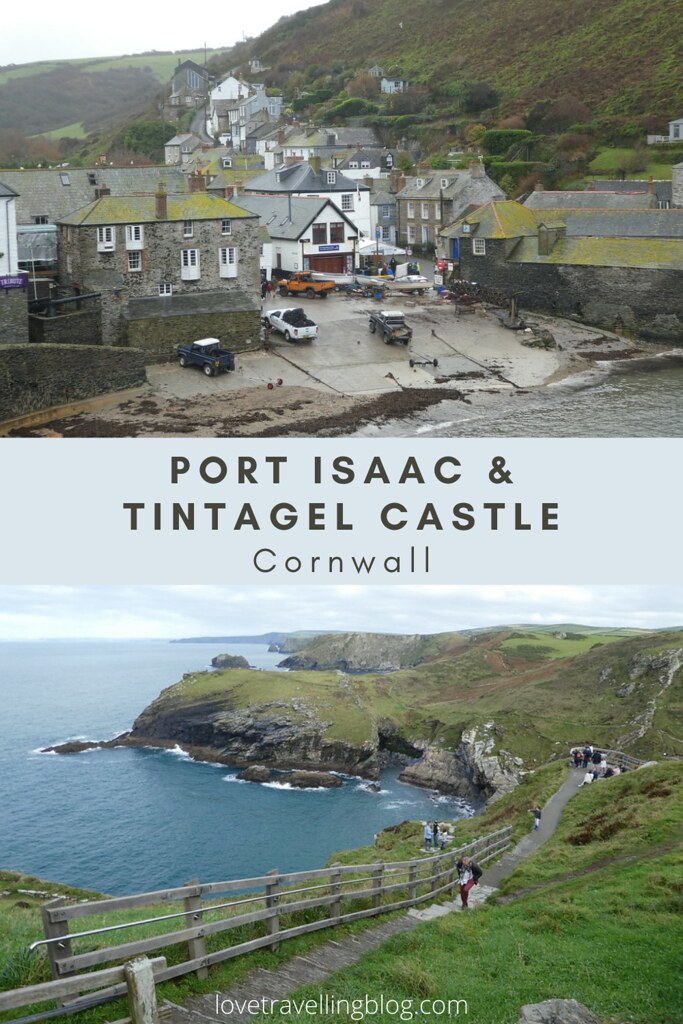