After stopping off in Bodmin for some breakfast we headed to Padstow which took around 35 minutes along some exceedingly narrow lanes.  Fortunately we didn’t meet any vehicles coming the opposite way so unlike the previous day there was no reversing required.

As we were visiting off season and reasonably early, we managed to find some unrestricted street parking which was just a ten minute steep downhill walk to the centre.  Padstow lies on Cornwall’s north coast sitting on the west side of the Camel estuary.  Its one of the south west’s most popular tourist destinations and is known as the ‘foodie’ capital of Cornwall.

Padstow is often referred to as ‘Padstein’ since the arrival of Rick Stein’s first small seafood bistro on the harbour-side back in 1975.  He certainly helped Padstow find its way into the discerning tourist’s map as we counted four of his restaurants, a cookery school, patisserie and even a hotel.  We began our walk along the town’s south quay which still functions as a working fishing harbour.

Overlooking the water we came across two of Rick Stein’s businesses, Stein’s Fish & Chips and Stein’s Deli which were both doing a brisk trade and it wasn’t even lunchtime.  Using the freshest of ingredients, the celebrity chef has managed to turn the simple pleasure of eating fish and chips out of a paper bag into a classy affair.  They smelt delicious and although sorely tempted, we resisted the temptation as it was not long since our big breakfast.

Along the quay we also came across The Old Custom House, a stylish hotel and bar and not far from there, the National Lobster Hatchery, a marine conservation charity based in the town.  Admission to the visitor centre is £4.95 and here one can learn about the charity’s work and view lobsters through the different stages of their life cycle before being released into the sea.

Padstow lies at one end of the Camel Trail cycle route which runs along a disused railway line.  We’d come across it earlier in the holiday when visiting Wadebridge approximately five miles away.  A cycle ride between the two towns is an ideal length for a family outing as its mostly flat and traffic free.

Although south quay is pleasant, what draws tourists to Padstow is undoubtedly its picturesque harbour.  Its a great place to sit on a bench with some fish and chips or an ice cream and watch the world go by.

Pleasure boats offer tours around the bay and a regular ferry service operates between Padstow and the upmarket village of Rock just across the water.  Crabbing appeared to be a popular pastime with children who could be seen with their plastic buckets and crab lines leaning over the harbour wall.

Surrounding the harbour are rows of charming fisherman’s cottages and merchant houses many of them now shops, cafes and restaurants.  Padstow is a very refined little place and its lovely small shops reflect this.

Amongst them, we came across the well-stocked independent bookshop Padstow Bookseller and Tarquins Gin School & Shop.  Add to the mix nautical retailers like Crew Clothing and Seasalt and you have just my sort of town.  Do make a point of adding Padstow to your Cornwall itinerary as I’m sure you’ll fall in love with it too.

Our day wasn’t over though, and on leaving Padstow we set off for Newquay, another of Cornwall’s premier resorts, a thirty minute drive away.  I’d visited Newquay once before but as it was on a family holiday when I was about eight, my recollections were vague to say the least.  Searching through old albums, I came across a photo of the clifftop hotel where we had stayed and discovered it was still there after all these years but presumably looks rather different internally now.

Newquay’s shops stretch quite a way along its high street and are typical of other British seaside resorts with their assortment of household names, gift shops, bars and cafes.  It lacks the charm of either Falmouth or Padstow but fits the bill for a family beach holiday during the warmer, summer months.

The first of Newquay’s beaches that we came across was the Great Western which takes its name from the railway which operated a service to the resort between 1876 and 1960.  This is just one of the resort’s four beaches and is popular with both families and novice surfers due to its sheltered position.  At low tide it’s possible to walk along the shore to the neighbouring Towan and Tolcarne beaches.

We then strolled along the clifftop in a westerly direction to the town’s pretty harbour.  This is still in use today with a small fleet of fishing boats and pleasure craft.  Long before the days of tourism Newquay was a small fishing harbour town noted for catching pilchards which were then exported to the Mediterranean.

Following the coastal path we arrived at the ancient Huer’s hut which derives its name from the French word ‘huer’ to cry.  The huer would watch the sea carefully for the moment it changed colour.  This indicated the arrival of the pilchards and a cry would go out alerting people to go out in their boats and haul in the fish.

Continuing further still we rounded the Towan headland which lies to one end of Fistral beach.  This famous beach has made Newquay the surf capital of the U.K.  Its conditions are perfect for surfing as the beach is sheltered by two headlands, funnelling powerful hollow waves to heights of up to 8 feet.

This beach has become a magnet for experienced surfers and is the venue for national competitions and the annual Boardmasters festival.  Overlooking the beach there’s an attractive seafront development which includes numerous facilities including wetsuit hire, surf shops, cafes and restaurants.

After spending some time viewing the large waves we turned inland taking a public footpath that cuts through the middle of Newquay Golf Club.  It’s a links course and looked attractive from the pathway which has overhead netting to protect walkers from stray golf balls.

The footpath acted as a shortcut back into the town centre and it didn’t seem to take us very long to return to the car after yet another very pleasant day exploring Cornwall.

A visit to Falmouth, Cornwall 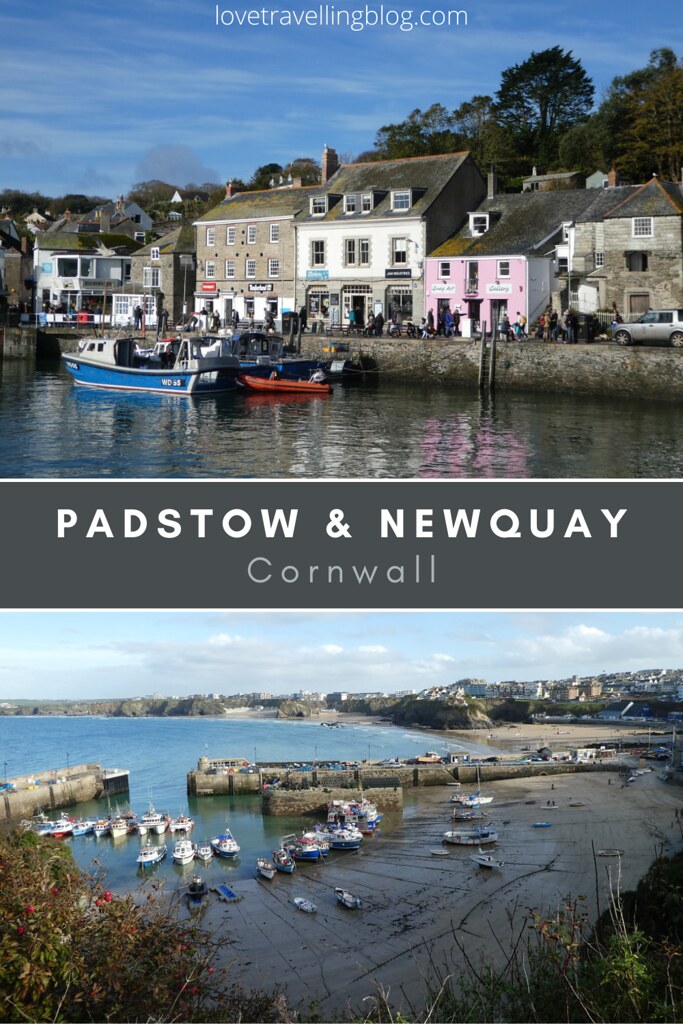